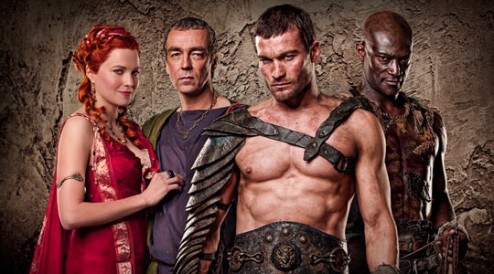 Grounds for appeal:  Since my initial review, the show has grown into something more than a sexy gore fest.

Not too long ago I said that I expected two things out of television drama: a plot that moves from one week to the next and a willingness to kill off main characters.  The way I see it, a show that is daring enough to bump-off a main has writers that are willing to plumb the depths of the human soul in a very serious and meaningful way.  Any keyboard jockey can kill off a redshirt; it takes balls to kill a character for which the audience as well as the other characters have an emotional attachment. This week Spartacus: Blood and Sand proved that it is a show that has balls.  This act, more than anything else, validated a concern that had been rattling around in my head: perhaps Spartacus: Blood and Sand deserves a second review.

First, a few words on my review process for television.  Usually I give a show three episodes before I write my review.   For a one hour drama, this method allows for a sample of 126 to 150 minutes of programming upon which I can base my sentiments.  That being said, I stand behind my initial review.  The first few episodes of Spartacus were piss poor.  The fight choreography was terrible, there was an over dependence on green screen shots and kinky costume sex was nothing more than a nod to adolescent fantasy.  But I’ll give credit where credit it is due when I say that the show had a train wreck quality that kept me coming back for more.  Never shall I claim to be a person who turns down an occasional spectacle.  Also, there is nothing on between Chuck and Castle on a Monday night.

If the last three episodes are any indication things on Spartacus are changing for the better.  This may have something to do with the fact that the writing credits get shuffled with each episode.  It is also equally likely that the early episodes’ banalities have worn my mental defences to the consistency of tapioca, resulting in lowered expectations for the show.  Regardless of which there are some clear improvements that deserve commentary.

First and foremost, Spartacus’ leading women, Lucretia (Lucy Lawless) and Ilithyia (Viva Bianca) have transformed from mere eye-candy into serious power brokers.  In pursuit of their agendas these women ply their cunning, connections and sexuality as deftly as the gladiators use their swords and shields.  I’ll actually offer up some kudos for a sex scene that not only advanced the plot, but genuinely put me out of my comfort zone.  Given that ancient Rome is littered with examples of strong women manipulating their husbands, sons and brothers – Nero’s mother is one of the first examples that comes to mind – it’s quite refreshing to see women as something more than naked props.

Another strong point for the show is that it has departed from the painfully pedestrian formula of its early episodes.  Upon Spartacus’ arrival at the ludus (gladiator school) the show followed a predictable talk, train and climatic fight formula.  Once the writers recognized that they could do an episode without an act 4 in the arena, they opened up new avenues for narrative development.  Without being too much of a spoiler, I can say that the show has traded in a measure of mindlessness for some old fashioned Roman intrigue.  Granted the intrigues of a Roman gladiator school is hardly The West Wing, but it’s is a marked improvement from the show’s early offerings.  Moreover, I think the show has established a little something English snobs like to call Pathos.  Simply put, I now seem to care about the ebbs and flows of the house of Batiatus.  This emotional involvement is quite the feat considering that John Hannah’s character is murderous Machiavellian slave owner.  Then again, I’m the first to admit that I’m a decadent twenty-first century Roman.

Finally there is Spartacus, himself.  In the beginning, it seemed like he could only alternate between two modes: morose or savage.  When the character started acting more like a Roman and less like a prisoner of war it allowed the writers to draw him into the larger intrigues of the show.  Additionally, changing the eponymous character’s nature allowed for his insertion into scenes with ensemble characters above the station of a mere slave.  Go figure, the show gets better when the lead actor gets a chance to act.

On a very essential level, the story of Spartacus needs to be the story of a slave leading an uprising against the establishment.  Three episodes into Spartacus: Blood and Sand the prospect of Spartacus starting any sort of political movement seemed as remote as Stephen Harper hosting an educational program for preschoolers called “Uncle Stevie’s fun-time caucus”.  Given what the character has had to endure over the last few episodes, the rebellion now seems wholly plausible.  I doubt that Spartacus‘ first season will see any Emmy nominations.  Awards, however, are irrelevant when a show proves that it has the potential to rise above its base origins.