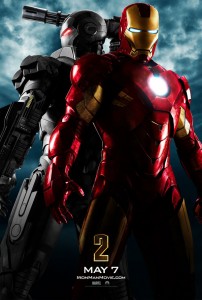 Thoughts on why I’m not kicking down old ladies to get in line for Iron Man 2.

In my younger days, I found Iron Man to be one of Marvel’s more appealing superheros.  Like all thirteen year old nerds, I started off as a Spider-Man fan.  Then I turned fifteen and decided that Spider-Man was pure and utter bullshit.  My change of heart didn’t have anything to do with convoluted plots that involved clones and love triangles.  No, my beef originated from Spider-Man’s quintessential lie.  After two years of high school, I figured out that even if you are a photography nerd and excel in science class, smokin’ hot red heads will always defer to the athletes.  Thus did I sell out and move on to Iron Man.

After the piss poor showing that was Fan 4: Rise of the Silver Surfer, I had very low expectations for Iron Man’s theatrical release.  However, a solid story, loyalty to the character’s origins – albeit adapted for the post 9/11 world – and RDJ’s acting abilities turned the movie into the mega-hit that we all know and love.  Why then am I ambivalent about the sequel?

Part of my apathy comes from the fact that Tony Stark has always been his own worst enemy.  T.S. is a drunken manic depressive who despite having access to a life about which mortal men dare not dream, still finds it necessary to down a forty of jack before putting on his armour.  In many ways, he’s the George Clooney of super heroes.  I can handle the darker side of Stark getting downplayed for the first movie.  However, to keep the character honest to the source material, his more destructive side needs to eventually come out of the shadows.  Given the PG rating, I don’t think we are going to get RDJ throwing bottles of whiskey at War Machine and sobbing in Pepper Potts’ arms.

Another reason I probably won’t be charging headlong into Iron Man 2 stems from the fact that I want Iron Man to fight a real foe.  The last movie was about corporate intrigue and from what I’ve read, this one is going to be the same.  So instead of watching Iron Man fight the Mandarin – okay fine we probably can’t get away with the Mandarin as a villain in the 21st century – I get another story about how a virtuous corporation beats a crooked one?  I know capitalism needs to hire some new PR people, but is this the best they’ve got?  It’s like I’m trapped in some morality play sponsored by the 19th century robber barons.

I’m also finding it increasingly difficiult to shake the feeling that every Marvel Studios release is just foreplay for the impending 2012 release of The Avengers. 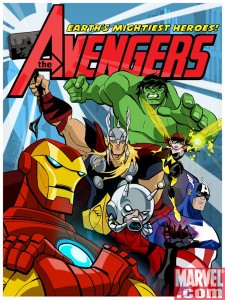 Since I know the back story of Captain America, Thor and Iron Man, part of me wants to just avoid Marvel movies until they come together to fight…the Skrulls…HYDRA…global warming?  Also, don’t get me started on how Chris Evans aka Human Torch from the Fantastic Flop was tapped to play Captain America.

Ultimately, I’m not sure what I’m going to miss by waiting on this movie.  I know it’s going to be big, loud and explosive.  RDJ’s probably going to get some funny one-liners that will make for at least a summer’s worth of water cooler fodder.  Sam Jackson as Nick Fury will make enigmatic allusions to the “Avengers Initiative”.  People will heap praise on Mickey Rourke for continuing to be a post-The Comeback movie darling.  By the end of the film RDJ will get his Iron Man helmet knocked off so we can see is face as he quips the ultimate one-liner that smites his foes.  Good guys win, bad guys lose and England prevails…wait no wrong slogan.  Team America, Fuck Yeah!

If I had any impression that this was going to be an AC/DC themed The Empire Strikes Back of the trilogy, I’d be standing in line for a ticket, writing with giddy anticipation on my iPhone.  I know I’ll eventually end up watching Iron Man 2.  Yet, unless somebody gives me a really good reason to brave the hordes, or Tony Stark sends the Quinjet to come pick me up,  I’ll probably wait until the week before Iron Man 2 leaves theatres before venturing forth.

So, do any of you have a good reason why I should rush to see this movie?

PS: Please send the Quinjet to come pick me up.