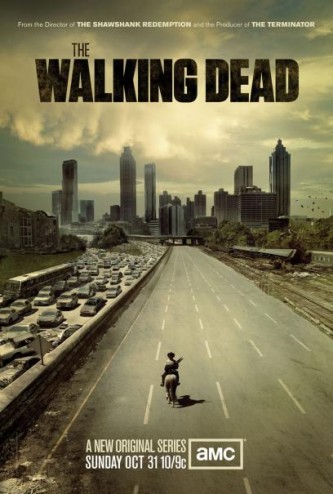 Summary Judgement:  Despite a familiar backdrop, The Walking Dead has the potential to do for horror what the Battlestar Galactica remake did for science fiction.

The way I see it, there are two types of zombie fans in the world: The type who dress up as the undead to go on zombie walks and those who dress up like their favorite zombie killer to go mess with people on the zombie walk.  The Walking Dead will likely appeal to both groups of zombie aficionados.  More importantly, the show has something to offer those who never considered the zombie genre as anything other than an excuse for over the top gratuitous violence.

Although I haven’t had any exposure to the monthly comic that is the show’s source material, I dare say this is one of the most sophisticated uses of the zombie genre that I have ever seen.  The only appropriate comparison that comes to mind is Max Brooks’ novel: World War Z. The fact that the show opts for a mood of suspense punctuated with the occasional scene of violence, rather than reveling in montages of zombie killing set to AC/DC’s Thunderstruck, clearly demonstrates a grown-up tone.  Furthermore, an impressive amount of human drama permeated the hour and six minutes of TWD’s first episode.  Even though I barely know them, I already care about the show’s principle characters.  Doing that in one episode is quite the feat considering that after three episodes of HBO’s The Pacific, I didn’t really know anybody’s name, let alone care about if they died of dysentery.  Truth be told I was cheering for the intestinal bacilli.

As I mentioned earlier, TWD’s plot begins on a note that it borders on being derivative.  There’s nothing particularly unique about the story’s first act; Danny Boyle did the same thing in 28 Days Later a year before the first issue of TWD was published.  Uninspired as it may be, the first episode, as a whole, remains sensational.  A small town cop, Rick Grimes (Andrew Lincoln), wakes up after an indeterminate amount of time in a coma to find that something is not quite right.  As he literally drags his atrophied body out of the hospital, he finds burned out buildings, abandoned military hardware and scores upon scores of dead bodies.  Inevitably he stumbles across his first zombie.  Stricken with fear, Grimes continues the search for his wife and son only to find his home abandoned.  In the interim, our hero finds other exposition devices survivors who bring him up to speed on the state of the world and the rules of zombification.  In sum: don’t get bit.  If you get bit, put yourself down before you turn.  Well fed and rested, Grimes sets off to find his lost family, thus establishing the hero’s quest.

One some level, I think this show can be viewed as a litmus test for the zombie horror genre.  Consider for a moment that producing quality horror for television is likely an extraordinarily difficult thing.  Most networks are going to put limitations on blood, guts, gore, desecration of Christian iconography and other such creepy hallmarks.  So the question becomes how do you play with the psychology of terror when your audience can get a beer on commercials?  Show too much of the horrifying thing and the novelty wears off.  Show too little and you bore the audience.  So far, TWD has kept an excellent balance between the two extremes.  As Grimes walks, runs, drives and rides horseback through a decaying urban landscape, brought to life through some of the best set construction you can imagine, the fear of zombies is always present.  This ubiquitous anticipation offers viewers an experience that oozes the kind of fear that keeps a person up at night.  When Grimes does kill a zombie, it is as much an act of kindness as it is self-defense.  This is doubly brilliant because it denies the audience catharsis that comes with a gratuitous kill while pairing the horror of mindless living death with an honest moment of humanity.  I might not be a television executive but that sounds like a winning formula to me.

Given the 5.6 million viewers for The Walking Dead’s first episode, a number that beats all rating records on AMC – including those set by Mad Men – it is safe to say that there is a strong audience for this type of television drama.  To put that number into further context, the Tonight Show with Jay Leno only averages about 3.6 million viewers [LA Times].  Hopefully the writers recognize that zombies make for great allegory and use them for more than target practice.  If they play their cards right this could move zombie horror into the mainstream in the same way that Battlestar Galactica set a new benchmark for space opera.

Overall Score:  +3.5 with the potential to go higher.