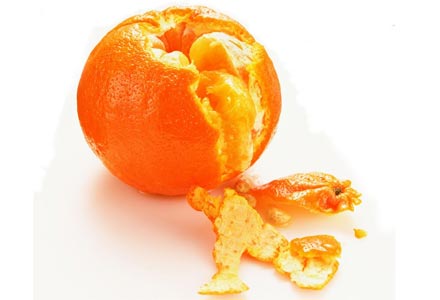 Summary Judgement:  Orange is a wonderful read that blurs the demarcation between short story and flash fiction.

Photo by: Spencer Jones-Getty – originally found on the Guardian Blogs.

Style defines Susan Forest’s Orange almost as much as its content.  Rather than follow a single protagonist through the end of the world, the story is a fusion of a half-dozen pieces of flash fiction.  These smaller narrative units are connected together through the exposition of a photographer who produces time lapsed images of an orange impaled upon a spike.  Trust me, it’s not as complicated as it sounds.  Although the format is unusual, it offers a uniquely cohesive story in relatively few words.

As I already mentioned, Orange is a story about the end of the world.  Although the details of this particular apocalypse are limited, the relationship between The Earth and “The Orange” offers ample back story.  Within the text, Orange presents snapshots (my words are chosen specifically to fit in with the motif ) of would-be survivors who have taken temporary refuge in the offices of a fictional multinational called SpaceCorp.  I’ll let your imagination take it from there as further details would spoil the story.

Despite the brevity of these snapshots, Orange is remarkably nuanced.  To call Ms. Forest’s writing rich and evocative is to commit a crime of understatement.  However, it’s not just the details that make this story work; the very structure of the text is essential to overall experience.  Short narrative chunks add a consistent sense of urgency to the story, even when characters find a reprieve from the anarchy of armageddon.  In keeping dialogue terse and descriptions to a pithy minimum, the tempo of the story is similarly accelerated.  Such natural pacing happens without the use of extreme violence, immediate doom or other such tropes in the arsenal of plot hastening.  Rarely do I find a story offering so much depth for so little investment.  Of course, that usually means the story’s imagery is going to live in my head for a while.  In this instance, I’ll roll out the red carpet.

I find myself wanting to return to the relationship between The Earth, “The Orange” and the photographer.  There’s a certain perfection in having decaying fruit as an analogue to the Earth; the symmetry says so much without having to say anything at all.  However, the photographer, the voice that connects the narrative bits together, oozes subtext.  It’s taking every ounce of my writer’s discipline to avoid turning this review into an exercise in literary deconstruction and analysis.  Come on, you know you want to hear me wax poetic about textual nuances, right?  Wait, where are you going?  Don’t leave.  I’m just kidding, I promise, I’ll behave.

With an abundance of books and movies jumping on the apocalypse bandwagon, it is wonderful to see a story that taps into popular culture without depending on popular tropes to tell a story.  Although Orange’s format is a little more challenging than some other pieces of short fiction, it is absolutely rewarding for those who give it a few minutes worth of thought.  The full text of Susan Forest’s Orange can be found on AE: The Canadian Science Fiction Review.  Here’s the link.