Price:  Cheap as Free!  If you want more, a fee of 1 Euro per month gives you premium membership and access to extra bells and whistles.

Long before the multiplayer mode of Assassin’s Creed: Brotherhood created a new niche of pathological mistrust issues, friendships, and even a few relationships, were forged and similarly destroyed over a century old map of Europe.  Of course, the latter didn’t happen that often as it was a royal pain in the ass getting seven people together to play one of Avalon Hill’s most wonderfully esoteric board games.  The good people at playdiplomacy.com have solved that particular roadblock to gaming joy by creating an internet version of Diplomacy that brings nineteenth century imperialism into the digital age.

Diplomacy is best described as a World War 1 version of Axis and Allies, but without any dice rolling.  As the ruler of one of seven European nations (England, France, Germany, Austria, Italy, Russia and Turkey) it is up to you to forge alliances and manipulate stooges until you can unfurl your banner across half the continent.  Diplomacy hinges upon the sublime art of negotiation and the even more sublime art of tactical betrayal.  Make no mistake, it is almost impossible to get through a game of Diplomacy without throwing somebody under the bus.  At the same time, the perpetual fear of a backstab has to be balanced against the necessity of depending on your allies.  Allow me to illustrate: 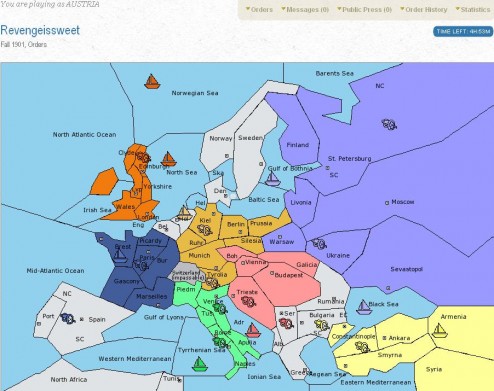 In this particular match, I am Shaftoe I of Austria.  Each cannon represents an army and each sailboat represents a fleet.  Armies and fleet all have equal relative strength and can only move one space on the map in each turn.  Those with an eye for tactics should immediately see a rather aggressive deployment of Austrian and German assets in the vicinity of Northern Italy.  Since armies and fleet have equal strength, as well as the ability to support each other in neighbouring spaces, it is impossible for either Germany or Austria to invade Italy alone.  The central powers would have to cooperate in such a venture as to gain the numerical superiority necessary to knock Italy out of Venice.  Therein exists the fun of this game: do I trust the Germans offer to help?  Or is it an elaborate ruse that will allow him to back stab me with an invasion of Vienna?  If I pull my forces back to protect my manufacturing centre, how much will I piss off the Germans and will the Italians trust me as an ally later in the game?  Oh what do I do?  My therapist told me to stop putting myself in situations like this…

As its moniker imples, diplomacy is essential to success in this game.  The online version’s in-game message system is not only effective, but speaks to the nineteenth century feel that permeates Diplomacy. Nothing embodies the spirit of this game more than reading a missive from a potential ally while sipping scotch at one’s desk.  Bismarck, himself, would marvel at such pure and unadulterated awesome.  (I know that last line was weak.  I had plans for a joke about building an empire in Northern Africa but I decided to cut it, despite the fact it would have be contextually appropriate to the setting of this game.  Shaftoe now braces for an onslaught of hate-mail about how he is an active participant in imperialist oppression blah blah blah don’t you have a dissertation or a conference paper you should be working on?)

The game’s phases, move-retreat-build, can be tailored to occur as quickly as every 12 hours or slowly as 7 days per phase.  There is also an option for live play that sees each move happen every fifteen minutes.  Both campaigns I’m involved in right now happen in 12 hour turns which is more than enough time to keep caught up on diplomatic cables without having the game intrude on real life.

The only flaw that I can see to online Diplomacy is that it can sometimes take ages to get a game started.  I joined my first game on a Monday morning but it wasn’t until late Wednesday night that we had enough players to start.  Even then, the battle failed to commence for want of all players confirming their participation.  To the designer’s credit, having a confirmation system for each game seems to help minimize the quitters and asshats.  Furthermore, this version of Diplomacy has let me play at dictator more in the last three weeks than I have in the last three years.  Such a venerable cornucopia of wheeling and dealing is well worth having to wait a few days to start a game.

With an active user base, lively forums and great support from the development team, playdiplomacy.com’s entry into online imperialism seems like a winner.  Hopefully Avalon Hill won’t decide to rain on their parade and shut the site down because it starts to do a little too good for itself.  I also hope I can avoid a punch to the stomach once I betray one of my friends.  Note to self, post this after tonight’s orders are submitted.