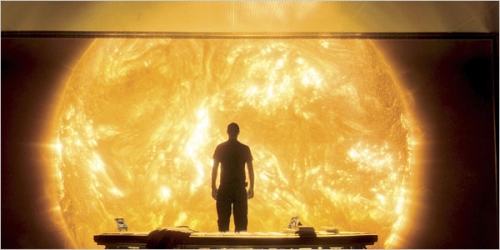 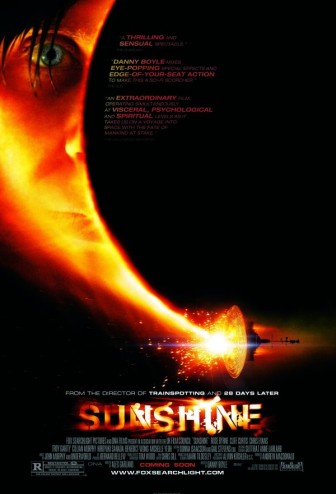 No, this isn’t a late entry into my “Sunday Stinkers” movie reviews.  I spent yesterday’s productive hours working on an application for an internship at IO9.com.  Fingers crossed on that note.  I decided to include the below movie review for Danny Boyle’s Sunshine in my application package.  Initially, I published this review on Helium.com way back in 2008 when I thought you could actually make money writing for content mills.  In defiance of Helium’s stupid rules, I decided that I would repost it here.

Summary Judgement: Probably the best looking thing I’ve seen in years, too bad the plot gets a little pedestrian in the movie’s last forty minutes.

Set in the not too distant future, Sunshine is the story of the good ship Icarus II.  Much like its namesake, the Icarus II flies a little too close to the sun.  The crew’s mission is relatively straight forward:  drop a giant nuke into the sun to save it from a premature death.  The film immediately scores points for avoiding fifteen minutes of back story heavily laden with science sounding words relating to nuclear fusion.

The marriage of non-spoon fed narrative with intense visual style should resonate clearly with anybody who has seen 2001: A Space Odyssey, Clockwork Orange, or Alien. Placed within the wider canon of science fiction films, Sunshine does much to restore the credit rating of a genre that has found itself under siege by a legion of box office flops – thank you very much Chronicles of Riddick.  Danny Boyle should be further recognized for successfully pitching a movie that defies the studio mandated safety net of pairing anything that is a bit too fantastic with derivative family friendly hokum.  Go tell it from the mountain that there is still a place in the world for intelligent science fiction movies.

Avoiding the pitfall/death knell of Brian De Palma’s unremarkable Mission to Mars, Sunshine deliberately avoids showcasing its ensemble cast as professional, but painfully boring, astronauts.  A fist-fight between ship’s engineer Mace (Chris Evans) and resident physicist Robert Capa (Cillian Murphy), only ten minutes into the film, sends a clear message to the audience; they might be very smart, very dedicated people, but they are still flawed humans.

The wonderfully flawed nature of the ensemble acts as a constant catalyst for the movie’s plot. When Icarus II’s navigator, Trey (Benedict Wong), makes a potentially fatal miscalculation, he slumps into such a deep depression that ship’s psychologist Searle (Cliff Curtis) assesses him as a suicide risk.  Addled with guilt and plagued by thoughts of humanity’s annihilation, Trey is sedated into a coma for his own safety.  Even if as a viewer you find yourself unable to conceptualize the death of a planet, the cast successfully distills their characters’ immense burden into easily digested examples of individual loss.  Such skillful writing enables the audience to identify with this fantastically terrifying plot.

Sunshine’s true brilliance, and the reason why people should see it, is found in its awe inspiring visual quality.  Make no mistake, I am not trying to suggest that this picture merely has good special effects.  Nor do I mean to imply that this is an overly self-serious art house film requiring graduate degrees in Fine Arts and Philosophy for basic comprehension.  Sunshine magnificently captures the simplicity of a paradox between something that is life giving but wholly destructive.  Taken second by second, frame by frame, Sunshine’s visual aesthetic wastes nothing.  Were the dialogue removed from this film, the magnificence of the imagery would still convey the essence of the story.

Sunshine’s noticeable turn from sci-fi to horror represents the only flaw in what would otherwise be a truly excellent piece of art.  Perhaps it was Danny Boyle’s need to create a tangible antagonist in the void of space, beyond the omnipresent destructive power of the sun, that led him to a place where inserting a run-of-the-mill murderer seemed like a good idea.  For a solid forty minutes Sunshine shifts gears from a sensory experience that pushes the colour palette of modern cinema to a pedantic horror movie.  I won’t say that this homage to hacking and slashing was poorly executed; rather that this plot gimmick added a pedestrian element to an otherwise comfortably thoughtful story.  Per chance to dream that a modern audience could sit through a “Man versus Nature” narrative without having a knife wielding maniac stab and shiv his way through a spaceship.

Sunshine is an artistic masterpiece that will satiate the appetite of anybody hungry for visual stimulation.  The narrative is one of self-sacrifice in the finest tradition the Greek heroic epic.  While the film’s horror elements noticeably detract from its overall thoughtfulness, the uninteresting attempt at genre crossing should be seen as nothing more than an annoyance akin to mild sunburn.  For the discriminating consumer of movies, Sunshine is not to be missed.