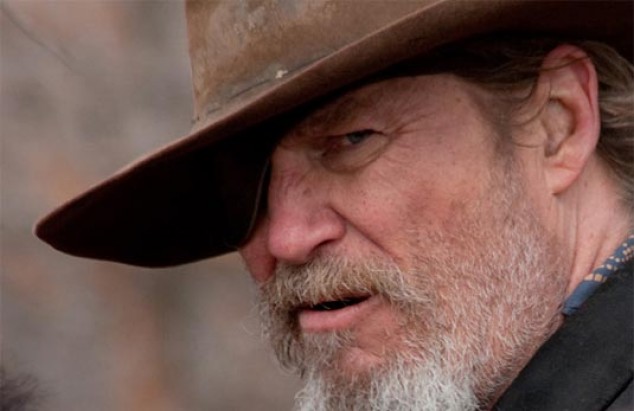 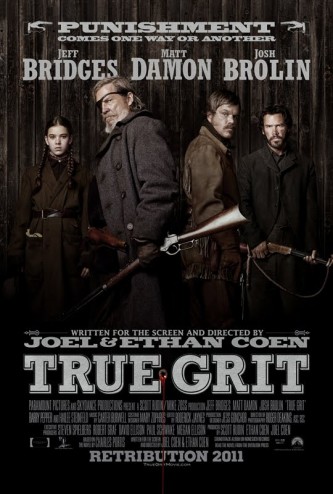 Summary Judgement:  Alternating between black comedy and revenge narrative, True Grit is as thoughtful as it is chilling.  Stick another feather in the Cohen brothers’ already well adorned caps.

Screenplay by: Joel and Ethan Cohen

Directed by: Joel and Ethan Cohen

Based on the novel by: Charles Portis

I watched True Grit on December 29, 2010.  Since then, I’ve also watched the screen adaptation from 1969.  Watching the original before putting pen to paper on my review was probably a mistake.  Where the Cohen brothers’ movie oozes legitimacy, the original film, right from its opening credits, put me off.  It might be that I don’t particularly care for John Wayne; it might be the opening theme song spoiled the mood for everything that followed.

At any rate, I shall attempt to write the remainder of this review without drawing too many comparisons between the two movies.

True Grit, like all great tragedies, begins with a murder.  Tom Chaney (Josh Brolin), a drifter turned farmhand, murders the Ross family patriarch.  This event sets fourteen-year-old Mattie Ross (Hailee Steinfeld – an actual fourteen-year-old at the time of shooting) on a quest for justice.  With Chaney hiding in Indian Territory, Mattie commissions U.S. Marshall Rooster Cogburn (Jeff Bridges), a hard living, hard drinking, hard farting over-weight cyclops with a reputation for bringing suspects to justice on his own terms, to help hunt down Chaney.  A Texas Ranger called LaBoeuf aka Mister La Beef (Matt Damon), charged with bringing Chaney to justice for the murder of a Senator, rounds out the unlikely posse.

It seems to me that revenge as a motif does interesting things to the nature of the hero’s quest.  Righteousness becomes a matter of perspective when the end of the journey leads to a cold-blooded killing.  Granted, Mattie wants to have Chaney brought to justice before a judge, but the net result is the same; the antagonist will die through the direct actions of the protagonist.  This is a risky sort of story as its very premise could serve to alienate the sensibilities of the audience.  How then do you keep people sympathetic toward a fast talking teenager with a penchant for vengeance?  The Cohen brothers’ solution is laughter.

The movie establishes a clear tone with its first words “Nothing is free except the grace of god.”  Is there a better way to set up a story about the thin line between vengeance and justice?  Mattie might bring Chaney to justice, but revenge is rarely limited to the parties at hand.  Ten minutes later, the mood shifts as Mattie Ross plies fast wit, adroit sophistry and a little extortion to turn one hundred dollars into three hundred dollars.  Is this a case of cinematic schizophrenia?   I don’t think so.  I’d wager we’re dealing with a clever way to reinforce the overall motif through the occasional piece of comedic subversion.  The point seems even more salient when considering the movie’s graphic depictions of violence.  Unlike the spaghetti western, none of True Grit’s gunfights or fistfights are drawn out action sequences; they are simply mean, fast and bloody.  Without laughter, the movie would alternate between drawn out scenes that are rife with tension and short spurts of violence.  More than mere catharsis, the laughter keeps the audience off guard.  We’re put through the same range of emotions as the characters where the tension never fully abates, but we can occasionally put it in the back of our conscious thoughts.  This balancing is positively remarkable.

While we are on the subject of things remarkable, let’s talk about the Cohen brothers’ depiction of the American West.  I’m happy to report that nothing stood out as particularly inaccurate to a story set during the post-Civil War twilight of the American West.  That being said, I want to mention a few things that other Westerns can learn from True Grit.  Horses don’t ride forever; eventually you have to feed, water and let a horse rest lest it collapse from exhaustion.  You have to crank the hammer back all the way with a single-action revolver.  Until about seventy years ago people had terrible teeth, I mean they were just awful; the farther back in time you go, the worse the teeth.  Up until about a century ago, amputation was the best way to deal with infection and serious injury.  Is adherence to these facts necessary in a great Western?  Not really.  But the more often I see an extra with bright shiny teeth, the more it drags me out of my blissful state of suspended disbelief (oh suspended disbelief, I wish I could move in with you and have one of those relationships where we are together but don’t bother getting married because it is too commercial).  The Cohen brothers’ attention to detail combined with some brilliant pacing kept me absolutely riveted to the screen.

While gorgeous landscape shots and abominations of dental hygine kept me entrenched in a vision of the American West, this movie would be nothing were it not for some brilliant acting by the principle cast.  Funny, I don’t often bring up acting unless it is accompanied by the dependent clause, “out of a paper bag”, then I can’t say enough.  As Rooster Cogburn, Jeff Bridges is fantastic.  Any grumbling I might have had about his work in Tron: Lebowski Legacy is hereby and henceforth, forgiven.  In fact, I’m going to give Bridges a free pass on any future stinker that he signs on for as a paycheque gig.  And I know, The Duke won an Oscar for his portrayal of Rooster Cogburn.  Some people will inevitably argue that Jeff Bridges’ performance was nothing more than a John Wayne impression.  However, that argument won’t change the fact that he is a better Rooster Cogburn than The Duke.  There I said it, commence the hate mail bombardment.  Similarly, Hailee Steinfeld is a sensational Mattie Ross.  She managed to balance innocence and outrage while holding her own with actors two to three times her age.  As for Matt Damon, I don’t know why he gets so much shit from people.  The man is a good actor.  I can think of nothing wrong with his performance and still I heard people doing this as I walked out of the theatre.

As hilarious as Team America was it’s been seven years, can we move on?

Overall, True Grit is a fantastic movie.  While I’ve come to expect excellence from the Cohen brothers, True Grit is clearly a high watermark in their body of work.  Notwithstanding some rambling between Bridges and Damon on the Civil War, there is neither a wasted word or scene in this picture.  If there is any justice in the world this movie will take its rightful place with the likes of Unforgiven.