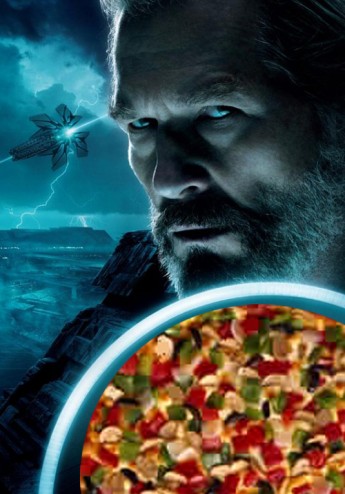 The more I listen to Daft Punk’s awesome Tron Legacy soundtrack, the more I find myself thinking about how I could drive a Recognizer through some of the movie’s plot holes.  For brevity’s sake, I didn’t bother to mention these plot holes in my initial review.  Also, I’m not sure how much of this evaluation is tainted by fanboy outrage.  Nevertheless, I have assembled eight significant problems with Tron Legacy.

*Serious and unrepentant spoilers ahead*

The original Tron movie showed us that there is a spiritual relationship between users and their programs.  The old man who founded Encom stated that a user’s spirit is imbued within their programs.  The nature of this relationship is demonstrated as we see the original CLU looking like young Kevin Flynn (Jeff Bridges), Tron bearing a striking resemblance to Alan Bradley (Bruce Boxleitner) and Yori as a digital doppelganger for Lori Baines (Cindy Morgan).  Hell even Sark, the MCP’s bad-ass digital Smithers, seems to be created in the image of Ed Dillinger (David Warner  – that’s right David Warner, I remember you were in Tron.  Just like I remember Christopher Plummer as a Klingon in Star Trek 6).  Tron: Legacy shows the same thing in that new CLU is a digital copy of young Kevin Flynn.  This seems fine and dandy until Flynn states that CLU can’t make new programs, only repurpose existing ones.  Flynn also tells us that nobody else knew about The Grid.  Thus, there is no way that all the other programs on The Grid are anything other than Kevin Flynn creations.   So why the hell don’t all of the programs look like Flynn?  For a moment, let’s suppose Flynn has ability to create any sort of program that he wants, as well as the artistic ability to build millions of unique human forms.  That brings me to my next point.

During Flynn’s first foray into the digital world he demonstrated some impressive “user magic”.  Flynn seemingly uses the force to rebuild a Recognizer and even turns his body into a conduit between two beams of energy.  If Flynn could do that in the Encom mainframe and if Flynn is godlike enough to create millions of programs outside of his own image, then why the hell can’t he fire lighting out of his fingers Emperor Palpatine style?  Too dramatic?  Let’s try something a little more down to Earth; why can’t Flynn hack the system from the inside?  Or why can’t Flynn write an army of kill-bot programs to overthrow CLU and his goons?

Let’s assume for a moment that food on The Grid is an avatar for electrical energy.  If that is the case, Grid food is subject to the laws of energy conservation.  That means that the food can’t simply grow, it has to come from somewhere.  You’d think that a dictator like CLU would have some way of tracking stray resources within his “perfect system”.  Also, if we consider that Flynn said one minute in The Grid was an hour in the real world (If you do the math that means one day in The Grid is sixty days in the real world and thus making Flynn about 1200 years old) he could have been up there for centuries leeching system resources without CLU noticing.

We all know that the nightclubs are driven by overpriced drinks and sexual energy.  The same holds true in The Grid.  Within the walls of the End of Line club, we see CLU’s security programs distracted by sexy vixen programs.  But if programs can’t make other programs then what the hell is the point of a program having a sex drive let alone sex organs?

Lightcycles won’t work off the game grid even though Lightjets will and they both seem to come from the same stick that one wears on their upper thigh.  Don’t even get me started on how CLU couldn’t track Sam and Quorra back to the mountains but they somehow could trace the path that Sam took into the city on Flynn’s retro Lightcycle.

Tron is supposed to be the most righteously awesome security program in cyberspace.  He’s so awesome that Flynn brings him over from the Encom mainframe to The Grid.  Because Tron is a program you can do fun things to him in the real world, like copy him or create a back-up version.  Why wouldn’t Flynn copy him ten thousand times to create the most loyal police force ever imagined.  Or if we don’t want to turn Tron into Agent Smith, why not keep a back-up or “legacy” copy of Tron stored somewhere, just in case of an emergency.  But no, we don’t do that.  We have Tron get ganked by a few of CLU’s goons in a crappy greyscale-as-to-save-budget scene so that Bruce Boxleitner’s role in the movie is minimized to a bit part, despite portraying the eponymous character.   Okay, this one is not so much a plot hole as a script revision.

What the hell is with Tron/Rinzler’s identity crisis.  At the most convenient plot point possible, Rinzler remembers that he is in fact Tron and not the mindless growling enforcer Rinzler.  One contrived backstab of CLU later, Rinzler plummets to his death like a good self-sacrificing hero.  As he sinks to the bottom of the Sea of Simulations he shifts colour from red to blue.  Aww, isn’t it nice when the hero is so very obviously redeemed?  Sure, except for when it doesn’t make even an ounce of fucking sense.  If a file is corrupted, it is corrupted.  It can’t magically un-corrupt itself and go back to normal.  You have to delete corrupted files and start over again.

“But, Adam,” some nerd whines from the peanut gallery.  “When Rinzler saw Flynn it triggered his memories and he rebooted himself.”

Okay, I might be able to buy that weak sauce excuse if Flynn had got his hands on Rinzler’s disc and reprogrammed him like he did when Quorra’s arm got lopped off.  Any other alternative explanations necessarily involve some sort of Jedi mind trick against Tron/Rinzler and given Flynn’s otherwise absent “user magic”, I’m not going to buy it.

Why, Disney?  Why couldn’t you just let me like the movie?  Why did you have to make me use my brain despite my best efforts to enjoy the ride?