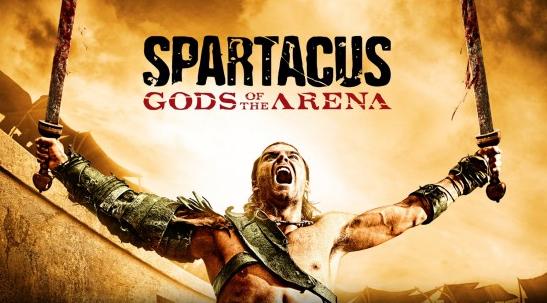 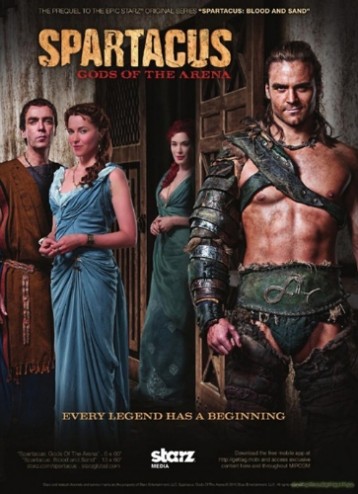 I haven’t decided what to think about the first episode of Spartacus: Gods of the Arena.  It goes without saying that show feels utterly inchoate without Andy Whitfield as the eponymous character.  At the same time, the immediacy of full frontal nudity combined with John Hannah’s continued penchant for cursing Jupiter’s genitals is as welcoming as mom’s home cooking.  That’s not weird, is it?  Despite the guts, gore, airbrushed age lines, hair dye, creative expletives and abundance of erect nipples, I have a few concerns.

In Blood and Sand, Spartacus was arguably the lone figure of justice, even if the definition therein fluctuated as his character developed.  Although he began as a man rebelling against the tyranny of an ambitious general, Spartacus transformed into a symbol around which the other slaves rejected the inequities of Roman social order.  While I could empathize with the tribulations of Batiatus (John Hannah), arguably because his avarice, ambition and sense of persecution at the hands of the gods are the embodiment of middle-class malaise, he remains a conniving political animal.  Without Spartacus as a protagonist, the show is a motley collection of anti-heroes, some more offensive than the rest.  Although a cast of characters who span the greyscale of morality has the potential to be quite interesting, they can easily make for a dull palette.  Similarly, inserting a new character as a stand in for a soon to be character seems tacky and unimaginative.  Are viewers going to care about Diona’s masturbations machinations (Jessica Grace Smith) when Ilithyia’s (Viva Bianca) deadly seductions are just over the horizon?

Just as Spartacus’ absence removes a variable from the equation that is the ensemble cast, so too does the lack of Spartacus dissolve a layer of intrigue.  Blood and Sand paired the politics of the villa with growing dissident whispers in the ludus.  Spartacus became the hand of fate as he and the gladiators stormed the villa, delivering a well-deserved comeuppance to Capua’s hubristic elite.  As a prequel, the audience knows that the miniseries will not conclude in comeuppance or any other suitable catharsis.  Given their respective stations at the start of Blood and Sand, there’s no way that Crixus (Manu Bennett) or Oenomaus (Peter Mensah) will act as a balancing force.  Indeed, whatever politics see Oenomaus rise to the position of “Doctore” will no doubt mirror the scheming of the villa, rather than having their own distinct flavour.  Crixus need only survive long enough to have Gannicus die the death of a swaggering fool to become champion of Capua.  That being said, I expect mini-series to have its intrigues, simply less nuanced intrigues.

These points shouldn’t suggest that the first episode was particularly bad.  The writers maintain their uncanny ability to produce the most brilliant similes that mortal man has ever dared to utter.  For example, “Words fall from his mouth like shit from ass.”  Awesome.  Just awesome.  I continue to approve of the show’s vision of ancient Capua.  While Roman historians, who were primarily of the well moneyed senatorial class, would have us remember their empire as one of filled with “conservative” people who were mindful of tradition and piety, it had its seedy underbelly.  Much like Blood and Sand, Gods of the Arena applies a generous dose of hyperbole to its vision of the past.  However, that vision is probably closer to the truth of Rome than some “conservatives” of today would care to admit.  I’d even go so far as to say that Gods of the Arena deals with the commoditization of the individual in a more astute way than its predecessor.  We need only see Oenomaus’ reward of an extra conjugal visit his wife to understand the line between owner and property.  Of course, the writers also saw fit to partner opiate induced lesbian sex with a gang beating in their simultaneous appeal to titillation and bloodlust.

Therein is the crux of my concerns.  I almost gave up on Blood and Sand because its first four episodes were a ménage of thrusting, in and out of the arena, exposed skin and expressions that defy translation into Latin (Yes, I tried.  No, I don’t have too much time on my hands, Mom.)  Were it not for the little Roman inside of me who thrives on such excesses, I wouldn’t have kept coming back for more.  With only six episodes, Gods of the Arena seems a little devoid of potential intrigue and a little heavy on the vice.  Considering that Gods of the Arena was designed to give Andy Whitfield time to recover from Lymphoma, perhaps it is okay that the miniseries lean more toward erotic/violent fluff.  I’d just hate to see Blood and Sand’s phenomenal season one ending tarnished by a “just okay” miniseries, clumsily peddling a needless back story.

Overall Score: +1.5, for now.  If Gods of the Arena manages to build a story that is as compelling as the first season, I’ll move it up to at least a 3.0 if not a little higher.

NB: Upon researching this review, I discovered that Blood and Sand season two will happen sans Andy Whitfield.  Get better soon, buddy.  The show won’t be the same without you. Click here for season two’s press release.