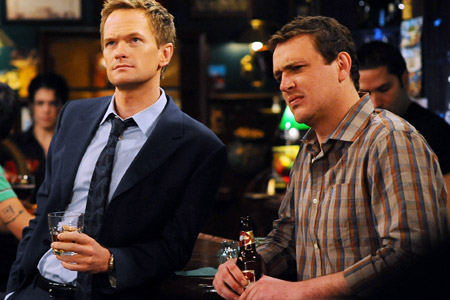 On Monday, the CBS sitcom How I Met Your Mother got real with its audience by killing the father of a main character.  After spending the episode exploring one famous sitcom trope, infertility, the series’ writers decided to go for a double-whammy: the dead dad trope.  To the show’s credit, we’ve seen Marshall’s (Jason Segel) parents in a few episodes, so at least this wasn’t a completely contrived scenario.  Sad as it was, it got me wondering if the sitcom, as a genre, is capable of working with emotions of loss in a more meaningful way than the occasional bit of catharsis.

Although How I Met Your Mother is significantly more sophisticated than your average 22 minutes of “laugh track in C minor”, it’s still a sitcom.  Therefore, it must follow the prime directive of sitcoms wherein the plots are picayune as to remain accessible to as wide of an audience as possible.  Some might argue that a show featuring university educated people flailing about in the post-boomer job market wholly sidesteps the sitcom prime directive, but that is a post for another day.  Returning to the point at hand, it seems that the only reason a sitcom kills a character is to insert a little sadness into something that is otherwise a dependable laugh.  To be fair, Jason Segel and Alyson Hannigan did a great job carrying the above scene.  What better way to capture the initial shock that comes with the death of a loved one than Segel’s line “I’m not ready for this”.  But, for all this scene offered will it become something more meaningful?

Consider the below clip from Scrubs.

If How I Met Your Mother follows the Scrubs formula, then probably not.  Scrubs routinely killed off characters; but it never had the courage to kill off anybody who rated more than a bit part.  While watching John C. McGinley chew on the scenery is a joy in and of itself, this particular moment of television is merely catharsis for the audience.  Even though McGinley’s character hit the sauce in the following episode, by its end the trauma was resolved and life returned to normal at Sacred Heart Hospital.

So what’s the point of killing off characters that the audience doesn’t really care about?  From a narrative point of view, it’s necessary to give the audience something bad every once in a while lest they grow to resent the characters for having perfect lives.  Still, that seems pretty pointless.  Isn’t there a better way to pair comedy with death?  Could sitcom writers take a page from drama writers, cultivating characters for long plot arcs only to kill them?  If not, could a whole season be built around watching a character deal with their emotional loss while the comedy of daily life unfolded around them?  Certainly people find time to laugh while grieving in the real world.  With five successful seasons already under its belt, what does How I Met Your Mother have to lose by bucking established conventions and making death something more than a gimmick that gives the audience a dose of sadness for the sake of sadness?

As sitcom death catharsis goes, Monday’s How I Met Your Mother earned a solid 4.0 on the Shaftoe scale.  For my time, I would love to see it go outside of the box and defy the established convention of killing redshirts distant or seldom heard from relations for a few minutes of artificial sadness.