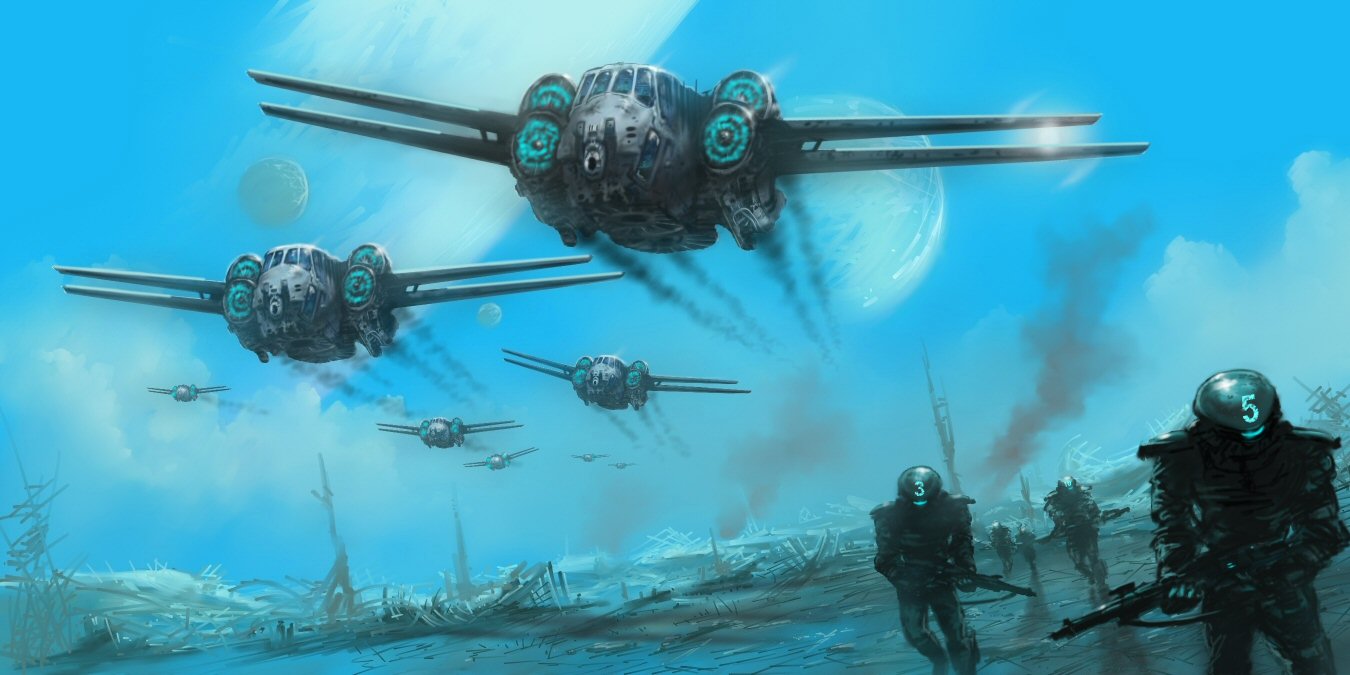 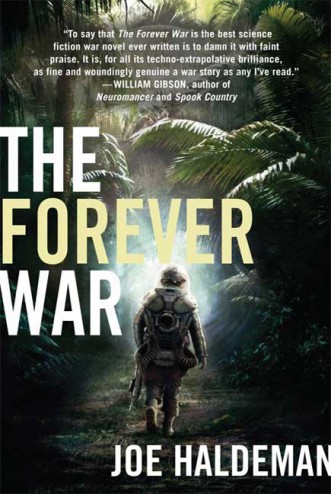 I’m not arrogant enough to think that I can contribute something new to the ongoing discussion of Joe Haldeman’s The Forever War. I expect that critics and scholars have had those dialogues for the better part of the last thirty-five years.  So why am I talking about this book at this particular time?  Good question.  It is a little embarrassing to admit that The Forever War only came on my radar about six months ago.  I was at a BBQ during the summer and a friend of mine told a story about how he met Joe Haldeman at Worldcon.  The story goes that Haldeman had no idea Ridley Scott was attached to direct a screen adaptation of The Forever War until my friend Ken told him so.  I was apt to call bullshit but a picture of Ken, replete with a well-earned “aren’t I awesome” grin, posing with Haldeman lent a certain amount of credence to the story.  He also got a picture with Eddie Olmos and Jonathan Frakes, the lucky bastard.

Anyway, my tendency to fixate on one author before moving on to another meant that I hadn’t made my way to anything by Haldeman.  Last week I rectified that problem during an afternoon with The Forever War. Rather than offer up a lauding review that will undoubtedly go where others have gone before, I want to discuss some of the themes that spoke loudest to this reader.

Given our current understanding of physics, The Forever War illustrates the biggest difficulty that will come with interstellar travel.  While the book details superluminal travel through wormholes, accessing these shortcuts through space in a timely fashion requires a starship’s acceleration to relativistic speeds.  William Mandella, the story’s protagonist, finds himself father and father removed from the world he is defending as his tour of duty stretches onward.  Because of time dilation, William ends his military career five years older but more than a millennia after he was born.

Notwithstanding the discovery of warp drive or some other engine that enables movement without acceleration, humanity will have to deal with this problem.  A starship travelling at .96C to Proxima Centauri, Earth’s nearest stellar neighbour, would arrive in roughly five years – assuming you could find a way to keep the crew alive through the acceleration.  However, the laws of physics would have us believe that relative to the rest of the universe, more than five years would pass on that trip.  I don’t know the exact math, ask a physicist if you want accurate numbers or a better explanation.

Planetary overpopulation is a persistent theme within The Forever War.  When William returns from his first mission with the United Nations Exploratory Force, he finds the world’s population far denser then when he left.  This population growth led to food wars which prompted the United Nations, acting as the sole world government, to abolish an economy of currency and replace it with an economy of calories.  Here I thought Paolo Bacigalupi was first to the table with that idea.  NB:  Subsequent research has revealed that various editions of the book explain the caloric economy in slightly different ways.  I read the most recent edition of The Forever War so I apologize if my reading seems askance.

Odd as a caloric economy may seem, it might not be that far off.  What happens when a critical mass of people in the privileged parts of the world start spending all of their money on food?  Would modern consumer commerce die of a sudden stroke as paycheques become nothing more than chits to be exchanged for the most basic survival needs?  Perhaps the idea will become more relevant if China’s crops fail and they drive up the price of everything by purchasing all the world’s grain supply.

Within Haldeman’s novel, the state supports same sex pairings as a form of birth control.  While this is introduced to William in the early twenty-first century as a lifestyle choice, time spent at relativistic speeds returns William to a homo-normative world.  Upon promotion to Major, his troops, all of them homosexual, refer to hetero William as the “Old Queer”.

There’s no doubt that playing with sexually identities was Haldeman’s way of alienating his character from the world for which he fought.  We can also view this as Haldeman inserting an allusion to the experience of Vietnam veterans as they returned to an America that was radically different than the one they left.  Alienation aside, I don’t know if this particular point in the book makes sense.  Characters within The Forever War regularly grouse about the commoditization of the individual, solider and civilian like, as war material.  Bearing that in mind, wouldn’t it be easier to force vasectomies upon the world than reprogram gender and sexual identities?  At any rate, a discussion about government and sexuality seems just as relevant today as it did in 1974.  Wait one, sexuality and government?  Somebody get a copy of this book to Glenn Beck.  The ensuing rant would give Jon Stewart material for a month.

Sufficed to say, there are many other ideas and motifs within the novel that merit discussion: military conscription, big government, social decay, second amendment rights, inevitable comparisons to Robert Heinlein’s Starship Troopers. Were I to start a science fiction book club, The Forever War would be the first book on my list.  Here’s hoping the soon-to-be movie stays honest to the source material.