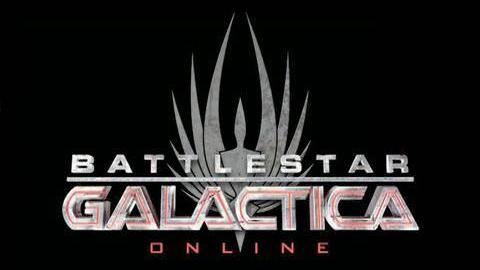 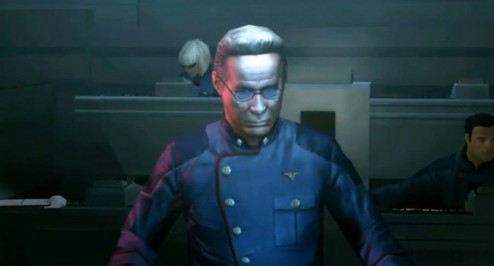 Summary Judgement:  This is a soulless, godless, indecent cash grab of an MMO in the worst tradition of Farmville and its bastard offspring.  The bigger tragedy is that I really want to like this game.

Upon its February 8th release, I spent a good nine hours with BSG Online. Despite the best graphics I have ever seen in a browser based game, I find myself so far from impressed that it almost defies explanation.  After going through a rather simple character creation system, I was thrown into the cockpit of my Viper.  There, a badly drawn rendering of Katee Sackhoff tossed a few text bubble insults my way before, surprise surprise, the Cylons interrupted my training mission.  One close encounter with a (sigh) alien McGuffin later and both the Cylon and Colonial fleets are FTL’d beyond the redline and into parts unknown.

Despite the weak character creation and not very accurate renderings of Bill Adama, Lee Adama, Kara Thrace and Galen Tyrol, the game’s early motions seemed decentt.  It’s set in my favourite BSG timeline: post Admiral Cain but prior to New Caprica.  Also, there is nothing more awesome than shooting up Cylon raiders while listening to Bear McCreary’s killer BSG soundtrack.  As an EVE Online veteran, I found the game’s controls quite intuitive.  But unlike in EVE, BSG Online gives players manual control over their ships;  I could actually fly my Viper.  With that in mind, combat in this game is at least as satisfying as what I found in Star Trek Online and almost as pretty. Of course, that’s where the fun kills itself like so many Colonials when the fleet landed on the thirteenth colony.

My biggest complaint about the game is its bullshit free to play structure.  BSG Online is likely worse than CityVille as an insult to gaming. In the “finest” fashion of Zynga games, BSG Online has two distinct units of currency: Tylium and Cubits.  Tylium is the basic currency for buying ammunition, ship upgrades, ship fuel and non-premium starships.  Since everything in the game is powered by Tylium, it is pretty easy to find.  Cubits are the game’s premium currency and can be purchased with real world coinage.  I could live with two-tier economics if it was just a matter of using Cubits to buy exotic weapons and starships.  Cheap bastards, like yours truly, can still get their hands on the fun stuff as killing NPCs and completing missions yields a few Cubits.  Of course, the developers don’t mention that it would necessitate playing sixteen hours a day for a few years to get enough money to buy a capital ship through NPC hunting.

The real travesty is that BSG Online lets players buy experience points with Cubits.  What the frak is the point of having a levelling system if some dork, armed with his mom’s credit card, can buy a few million Cubits, level up over night and then use the leftover money to buy a ship that can shoot a hole in space-time?  Said power player could even get around the time delayed skill development tree by buying buffs that speed up the wait time on learning new abilities.  It is as if NBC Universal, Bigpoint and Art Plant are saying, “If you want a fair gaming experience, go play one of those subscription games like Star Trek Online or EVE. We’re the game you want to play if you have an addictive personality, three major credit cards and enjoy being a douche while lording your wealth over those poorer than yourself.”  Who makes a game that is so disgustingly overt about its unfairness?  I don’t know if it is the inherent injustice that makes me angry, or the fact that they are taking the second best space opera of the last twenty years and using it to push a shitty product.

On a side note, players can’t upgrade the Mark II Viper to the oh-so-sexy Mark VII, even with premium content.  As a Viper pilot I upgrade to a Raptor or some ugly non-canon ships.  How the hell is the fraking school bus an upgrade from a Viper?  It’s like trading Mad Max’s V8 Interceptor for a Ford Windstar.

Some words on game play: the designers might be plugging BSG Online as a “strategic battle for resources and territory between Human and Cylon players”, but I just call it a sadomasochistic spanking. Without wanting to belabour the point, I don’t see how you can have interesting PvP combat when players with the most real world money will do the best in PvP.  Levelling doesn’t mean jack when offensive and defensive power are tethered almost wholly to the ship you are flying.  The PvE combat is similarly uninspired and boring. Each day, an NPC who looks a little like Jamie Bamber offers up a laundry list of quests.   Such quests include “blow up five sensor drones”, “patrol three systems”, “mine 1500 units of Tylium”.  The game doesn’t even bother to dress up its “farm or grind” dynamic with the trappings of a story.  At least WoW gussied up its pointless farming and grinding with some creative exposition.  While Apollo will reward your work with a pittance of ammunition, Tylium and Cubits, once the day’s missions are done, there’s nothing for you to do except farming and grinding on your own.  I’m sure it won’t take long for the dev’s to build in a feature where you can spend Cubits for access “black ops” missions vis-a-vis buying more energy in FarmVille.

The only other option for structured play is to visit digital Admiral Adama for story line missions.  I managed to play through three of these assignments before the Admiral told me I didn’t have enough experience to help.  I know the game is still in beta, but this questing system is so utterly devoid of imagination that it kills my desire to play the game.  My pessimism is reinforced when attempts at farming in a seemingly safe sector are met by a half dozen Cylon players in VERY big ships.  They might as well give me a self destruct button because in a situation like that there’s no way that I’m going to last the sixty seconds it takes for my FTL drive to spin up.

Much as I’ve enjoyed tearing this game to shreds, it really does pain me to do so.  I wanted so much for this to be a fun game.  Even as I write these words, I want to jump back into the cockpit of my Viper and blow up some Cylons.  But the joke of free and egalitarian gaming ruins any potential for long term fun.  I’m not opposed to paying for a product, but doing so shouldn’t prejudice the game in favour of the big spenders.  My philosophy is that you charge everybody the same and give everybody the same chance for success.  MMOs work because they are libertarian spaces; players have equal chances for success so long as they keep their wits about them.  When intelligence fails, there is always a marathon grinding session.  Compulsive as they may be, you have to respect the dedication of a person who gives up all other forms of social contact to grind in an MMO.  With its venal trade system BSG Online is so much like our world that it makes me long for the lesser injustices of office politics.

You can find the second part of this review here