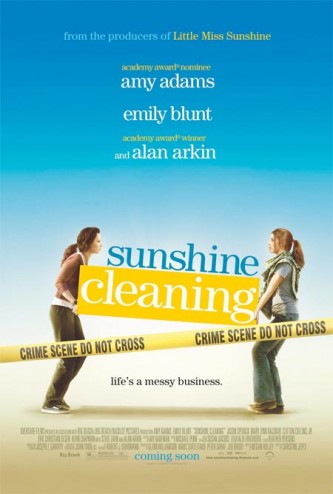 Summary Judgement:  The movie is touted as  “…a quirky and well-acted dramadie…”.  For my time, it is none of those things.

Sunshine Cleaning stands as an example of a story where an absence of awful material fails to propel the story into the realm of being good.  Its branding as a “dramadie” speaks more to the movie’s inadequacies as either a comedy or a drama rather than some fantastic fusion of the genres.  Truly, it took seventy-five minutes before Sunshine Cleaning managed to get a single laugh out of me.  At the same time, the dramatic elements came with all the depth and predictability of Happy Gilmore.

Amy Adams plays Rose, a single mom and maid with a heart of gold (my kingdom for a movie where the maid is a Machiavellian plotter).  Rose is sleeping with Mac (Steve Zahn) a married police detective and her former high school sweetheart.  Mac tips Rose off to the fact that she could raise the money she needs to send her seven-year-old son, Oscar (Jason Spevack), to private school by cleaning up crime scenes.  To help with the would-be business, Rose enlists her feckless and jobless sister Norah (Emily Blunt).  If only to answer “Who’s looking after Oscar?” Alan Arkin reprises his Little Miss Sunshine role as the outspoken grandfather, sans that character’s charming affinity for porno.  And that is the movie; Rose and Norah clean crime scenes while Grandpa babysits.

The whole production comes off as a bunch of separate plot threads that never really come together to form something meaningful.  While Rose tries to balance being a mistress, entrepreneur and mother, Norah “bonds” with the dead people, so much so that it creates a wholly wasted sub-plot.  Like so many other things in this movie, a potentially interesting relationship between Norah and the daughter of their first client, both of whom rank fairly high on the damaged people meter, is cast aside for no apparent reason.  Even Rose’s tawdry relationship with Mac seems to embody the spirit of this film as their trysts feel awkward and clumsy.

Part of the problem with this movie might have to do with the fact that Norah and Rose have all the nuance and complexity of teenagers on a mediocre sitcom.  Even though the characters talk endlessly about dealing with the dead, the emotional realities of cleaning up after murders and suicides never quite seem to hit home.  Wiping up blood and guts comes off as “icky” rather than macabre.  I think we’re supposed to find the comedy in those parts of the movie.  When the story manically tacks to the dramatic, the emotional infusion comes with all the subtlety of a poorly executed colonic.  Combine this with the duo’s sophomoric fixations and foibles and the plot of Sunshine Cleaning could easily be transplanted into a latter season episode of Full House. Even a veteran actor like Alan Arkin can’t escape the black hole of wasted potential that is Sunshine Cleaning.  Arkin’s character, having lost his wife to suicide and raised the girls on his own, should be a broken and world-weary allusion to Willy Loman.  Instead, he and his get rich quick schemes come off with all the elan of Klinger trying to get a section eight.

After spending ninety minutes almost absent tension or laughter, Sunshine Cleaning left me feeling nothing more than an hour and a half older.  The movie isn’t bad, so much as it is safe.  On occasion, Sunshine Cleaning tentatively creeps toward being outside of the box, only to beat a hasty retreat back into the box.  Hell, this movie takes the box and turns it upside down before crawling under it and proclaiming to all who pass by that the box is now a spaceship.  Much like watching an eight-year-old indulging their imagination, Sunshine Cleaning’s charm lasts for about five minutes before becoming an exercise in boredom.