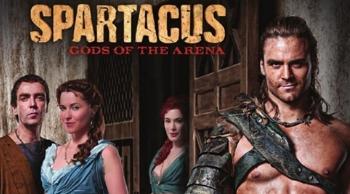 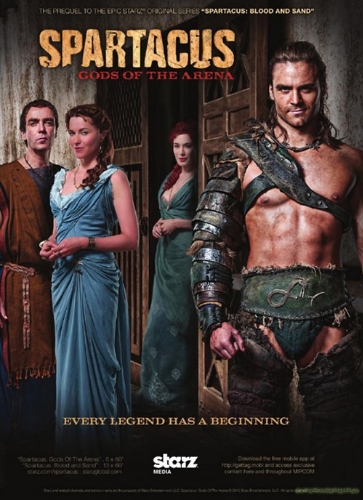 Normally, I’m not one to write ongoing commentary about a television program.  I like to bookend my TV reviews with initial thoughts and then a wrap up review where I’m either eating crow or gloating.  However, this week’s episode of Gods of the Arena is so particularly tedious that it moves me to put thoughts to action.  I’m not quite sure if that last sentence makes sense, but it fits contextually with the show’s dialogue so I’m going to run with it.

Let’s start with the wine splashing breast licking threesome that inaugurated this particular episode.  Now the gods know that I’m not a prude, but even I’m approaching a saturation point with respect to the show’s sex scenes.  It’s akin to having a standing invitation to Caligula’s house; you know it’s probably going to be a good time but there’s the lingering fear that somebody will shove a pineapple up your ass just for the sake of novelty.  Case in point: last week we saw a slave rape another slave for the autoerotic amusement of a houseguest.  This week, the patriarch of the Batiati walked in on his son amid an orgy that would make Hugh Hefner blush.  So how do you up the ante for next week?  Perhaps Barca will take a furlough from the ludus to make love to a centaur at the foot of Mount Vesuvius?  Sufficed to say, I can no longer defend the show’s sex as a subversive reading of Roman history.  It’s just titillation to draw as wide an audience as possible.  Beware the ides of March, Starz.  The Romans knew all too well that the loyaty of the mob hinges upon their painfully short attention span.

Then there’s Crixus.  Crixus may be new to the life of a gladiator, but he hardly seems to possess the mettle of a future champion.  Manu Bennett, perhaps under directorial direction, spends most of the episode walking around slack jawed and wide eyed.  Where’s the savage Gallic fire?  Where’s the swaggering posturing arrogance?  Notwithstanding some awful montage sequence, how is this character supposed to evolve into a living legend, let alone a god among mere mortals.

Heaping insult upon injury is this episode’s awful camera work.  It could be that there was one pint too many of Russian Imperial Stout coursing through my post-Superbowl veins, but half the episode seemed to have been shot in slow motion.  Much to my surprise, Michael Bay is not attached to this episode as director.  Michael Hurst aka Iolaus in Hercules: The Legendary Journeys is to blame for this overuse of slow motion blood splatters, boobie jiggles and sword thrusts.  While I’m on the subject of thrusting, what’s the rationale behind having the two gay gladiators suddenly turn into expert warriors with the spear?  You’d have to be both blind and stupid not to recognize the immature phallic metaphor in action.   Why not just skip the bullshit and fire off a man-on-man sex scene?  Given the show’s target demographic, I don’t think it would hurt the ratings.

With only three episodes remaining in the miniseries, what little glimmer of intrigue that the show offered over the last two weeks has been summary tossed in the laundry like so many of Batiatus’ soiled bed linens.  Instead, we are left with an utterly predictable story arc.  I imagine episode six will end with some permutation of Quintus Batiatus killing his old man, Onamaeus learning how to crack his whip, Onamaeus throwing his wife off the precipice of the ludus and Crixus killing Gannicus in the arena.  While it kills the fifteen-year-old version of myself that still resides within the dark corners of my mind to say so, this show has turned painfully stupid.  I hope the second season is already filmed because if I were a network executive I’d have some serious doubts about this show’s future.  Perhaps some consistency in the writing and directing might help get things moving in the right direction.  Then again sex sells and TV is all about ratings.