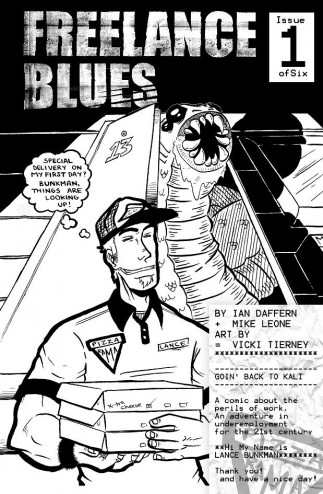 Summary Judgement:  Freelance Blues offers a hilarious concept that pairs the banalities of modern under employment with the slaying of evil monsters.

Before I get to the review, I should address a couple housekeeping issues.  For those keeping score at home, this review is post #100 on the Page of Reviews.  Regular readers will know that I’ve been dragging my feet on putting this post together.  There are two reasons for the delay.  One part is that I’ve only now pulled myself out of the mental quicksand that is marking undergraduate papers and exams.  The other reason is that I’ve been trying to come up with a subject befitting a centennial post.

I know 100 posts is nothing special when it comes to writing for the internet.  Still, I wanted to do something to mark the occasion.  By about ten this morning, I decided that come hell or high water I would write something today, even if it amounted to a review of the first episode of the new Doctor Who season.  It turns out that the mail gods had something different in mind for me.  You see, a few weeks ago I dropped my name in a raffle box at the Ad Astra Science Fiction Convention.  For my time, I won a free issue of Freelance Blues and a stylin’ t-shirt.  Never one to argue with providence I decided to dedicate post #100 to this clever indie comic.

Be forewarned that while I love reviewing books, I’m not the best judge of art, Art or “art” so kindly forgive any rookie mistakes when I get to talking about the comic’s visual aesthetic.

Freelance Blues is the story of Lance Bunkman.  On the surface, Lance seems like a bit of an aimless drifter.  He goes from one job to the next, never able to “make it work”.  Of course, this isn’t necessarily Lance’s fault.  Could you stay at a job for very long if it turned out that your boss was the physical manifestation of the Hindu god of destruction?  For Lance, fighting evil goes beyond the thankless self-sacrifice that burdens the poverty-stricken niche of super heroes.  Every defeated monster on Lance’s resume represents another session of pounding the pavement to find a new job.

There’s something immediately cathartic about Freelance Blues. It’s obvious that writers Ian Daffern and Mike Leone have worked some right terrible jobs in their lives.  However, there’s really nothing in the issue that would constitute whinging about work.  Despite the soul sucking nature of Lance’s jobs, I couldn’t find a single panel in the first issue where he is complaining about his lot in life.  In his more reflective moments, Lance desires to understand why he is the only person that ever rises to the occasion when senior partners start eating their clients.  As I imagine that most people have had a day where they feel that they are the only person who cares about their work, the sympathy that Lance’s character generates nicely compliments the outlandish nature of the overall concept.

The story’s balance between pathos and parody is further accentuated through Vicki Tierney’s excellent artwork.  Black and white images contrast the sterility of the modern workplace against the destruction of its tedium through monster attacks.  The monsters themselves are doubly clever as caricatures of the places where they have installed themselves.  Case in point: I certainly felt like a drone within a hive mind when I worked at a call centre.  I’ll say no more on that note lest I spoil the gag.  The consistency of the small details within the book are also worth mentioning.  From the motivational posters on the walls of the break room to the grain of the laminate floor in Lance’s house, every panel seems to get the same level of attention as the one that came before it.  While I may not be a comic expert, I’ve read a few where the artist cuts corners on the more mundane elements of a page.  Kudos to Vicki Teirney for keeping the bar set high.

At $4 an issue, Freelance Blues seems priced on the mark for a well drawn and well written 24 page comic book.  While the concept initially struck me as a bit out of left field, its execution on paper is outstanding.  Freelance Blues is smart, allegorical and quite in tune with the fact that too few of us get paid for plying our natural talents, even if that skill set extends to killing monsters.

You can read the first issue of Freelance Blues for free at www.freelanceblues.com