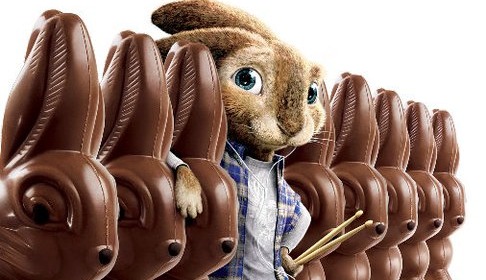 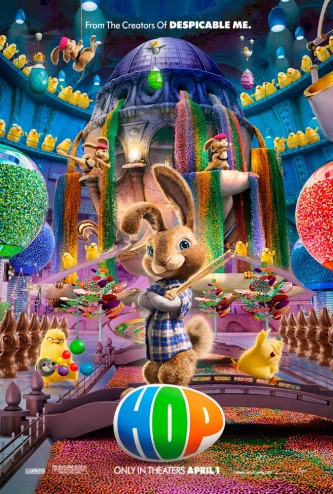 Summary Judgment: Hollywood’s presentation of Easter will likely net some hefty profits without having to deliver much more than rabbits shitting jellybeans.

Easter is the one holiday that rarely receives Hollywood’s attention.  This may have something to do with a fear of retribution for shaming Christianity’s most sacred holiday.  Perhaps another explanation is found in the “Bunny’s” quiet lore.  In recent memory, only two movies of note have explored the Easter theme: Mel Gibson’s exercise in sadomasochism, The Passion of the Christ, and now, Hop.

My wife, sister-in-law and I decided to take my two nephews, aged five and three, to see Hop on its opening weekend.  I’ve used them as a barometer for “the children’s perspective.”  Bearing that in mind, their reactions seem to suggest that this movie is at best a mild diversion. When questioning the eldest of the two on if he liked the show, he responded with an unemotional “yeah” and “I dunno” before changing the topic to Transformers and Bakugan.  My sister-in-law coerced the youngest into admitting that his favorite part was the “dancing part at the end.”  Somehow, I suspect that the Winnie the Pooh preview had him more captivated than the rest of the movie.

Set amid the upper classes of Hollywood, Hop brings us the unlikely tale of E.B. (Voiced by Russell Brand) and Fred (James Marsden).  Both characters can be viewed as slackers: daunted by the responsibility of adult life while still believing that they are destined for greatness.  Fate sees the two come together; the joke being that Fred’s social life is turned upside down by E.B. in a style often found in Ben Stiller films. Punctuating a litany of family friendly clichés, the characters offer a duet of “I Want Candy”, attend a drum audition with David Hasselhoff, and, in true Hollywood fashion, they both end up as unlikely saviors who accept their adult responsibilities.  That about sums up the movie.

Where Shrek, Toy Story, Despicable Me, and How to Train Your Dragon stand as great examples of films that the whole family can enjoy, Hop fails to create a children’s story that also recognizes that there are adults in the audience.  Instead, the movie uses watered down tropes to try to genuinely appeal to everybody.  Rather than embarking upon the delicate balancing act of entertaining both child and adult audiences, the writers should have kept to the tried and true method of catering to children while winking at the adult audience.

Criticisms aside, I didn’t hate the movie.  There were a couple of chuckle moments, though almost all of the laughs are seen in commercials.  If viewed as a series of comedic vignettes, it is even possible to enjoy the movie.  Furthermore, the animation was genuinely well done.  The “Pink Beret” bunnies were adorable.  James Marsden’s on screen interactions with E.B. went as smooth as anything I have ever seen that involved humans and animated characters.  I’ll even say that I didn’t mind the movie’s punchy soundtrack.

Once it arrives on DVD, Hop will probably be a good movie to arouse naptime for children under five and those under the influence of controlled substances.  I think that a different name for the film would have been appropriate, but perhaps that’s all part of the marketing.  Still, it’s hard to look at this movie and see anything other than Hollywood making money from niche exploitation.

Overall Score: -1, but at least it kept the kids quiet