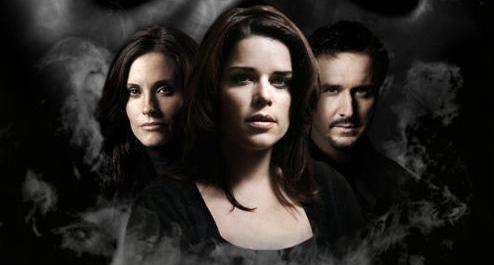 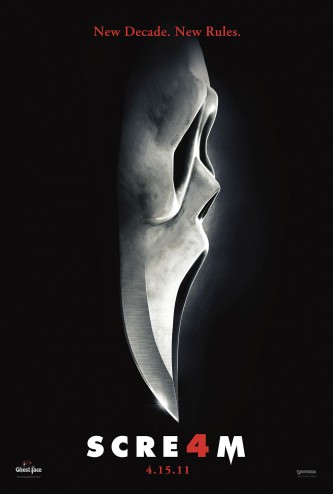 Summary Judgement: Wes Craven’s history of pointed remarks on reboots, remakes, and sequels made me giddy to see if he could produce an intelligent offering therein.  With its tried and true formula the movie’s gentle twists and turns left me quite satisfied.

People who talk about this movie are apt to remind us that it’s been ten years since the last entry of Wes Craven’s Scream franchise. Often, the underlying implication to those observations is that there’s not much left to offer in Woodsboro. The residents are no longer interesting or relevant, just tired clichés of themselves. More importantly, the concept may no longer be scary. All those other reviewers are missing the depth that Scream 4 offers viewers.

It is an injustice to label Scream exclusively a horror/slasher flick. Scream has always married satire/social commentary to the genre.  Ten years on the shelf has given this sequel lots of material to work with. Sure, the formula is still the same: the killer speaks through Roger L. Jackson’s voice, people get chased by Ghostface and die, “rules” are established and the list of suspects whittle down to the main cast. However, that’s not where one finds the genius of Scream.

In it’s meta-textual style of “life imitates art imitating life,” Scream 4 begins as a sequel within sequel within sequel. In a span of fifteen minutes, the audience is bombarded with as much subtext as Orwell’s Nineteen Eighty-four. The alt-reality Stab franchise, in it’s 7th sequel, is an open commentary on what Scream would have been had it followed the path of Halloween, Nightmare on Elm Street, Saw and every other longwinded horror movie franchise. At the same time, on-screen characters speak to Hollywood’s need to appear current as they speculate that a Facebook killer is improbable because the need to be cutting edge would demand a Twitter killer. Characters even suggest that Sidney Prescott had a franchise misplacement and that she belongs in the Final Destination movies because of the body count that follows her. What Scream 4 does best is to use those first fifteen minutes to drown us with horror that is laced with subtle parody and commentary.

Another of Scream 4’s strengths is its ability to play with the “artistic” validity of sequels and reboots.  The cast reflects the original in a mockery that, from a plot point, suggests that history will repeat itself.  Yet, it doesn’t pull any punches or offer up any apologies for this blatant archetype plodding.  For example Jill (Emma Roberts), could easily be Sidney’s (Neve Campbell) look alike cousin. Deputy Judy (Marley Shelton) is in all manners a female Dewey (David Arquette). Gail (Courtney Cox) even suggests the only thing missing between Dewey and Judy is the mustache. Trevor (Nico Tortorella), the creepy ex-boyfriend, obviously channels Billy Loomis (Skeet Ulrich). So is Wes Craven following in the footsteps of Star Trek and recycling the same crap with a younger cast?  Or could he be having a little fun at the expense of Hollywood’s creative void?

Although the movie exists within its self-established formula, there is still room for some new twists and turns therein. In fact, familiarity works against the audience.  Once the movie put all the pieces on the board, I found myself lulled into a false sense of prescience.  Things got exciting when the movie seemed to go off the rails with people flouting the rules.  It kindles the same feelings I had in an exciting game of Diplomacy I once played with Shaftoe, despite the fact he is a backstabbing bastard.

To its credit, Scream 4 offers the biggest number of strong and reasonably nuanced female roles, per capita, of any film that I have seen. Gail is being eaten alive by her perceived inadequacies as a writer who has tasted success. While onscreen, she asserts herself utilizing her latent investigative journalist skill-set demanding that Dewey take her seriously. Sidney is strengthened by past experiences and dives headlong into the terror when no one else can, providing mentorship to the new cast with boldness and a strong heart.  Even the new characters deliver for their part in the movie.

Scream 4 is the product of experience.  Through its writing, acting and directing that experience comments on society, social trends, the politics and production of movies and how those producers view the current generation. Perhaps Scream 4’s trouble is that too much of it’s content is too subtle for a viewer desensitized by a decade of gore-fest horror movies. So does it really matter if Scream 4 a reboot or a sequel? I think not.  All that matters is that Scream 4 offers value for money and time. Also, in the words of the movie, Scream 4 works because it “didn’t fuck with the original.”