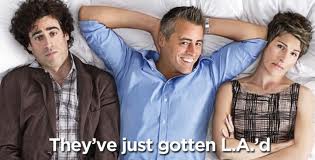 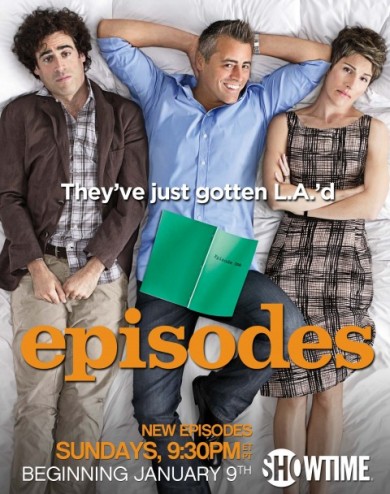 Summary Judgement:  Highbrow British comedy collides with the banalities of Hollywood to produce a hell of a funny sitcom.

Showtime’s Episodes is the sort of show that makes me think that television might not be doomed to the mindlessness of “reality” television or tedious sitcoms that are as eager to show off their laugh tracks as a stripper is to parade her new boob job.  Indeed, I wish that I would have discovered Episodes about two months ago when my undergraduate students were grappling with the idea that a comedy can offer more depth than a tragedy.  Showing absolutely no mercy to Hollywood, or at least the popular perception of Hollywood, Episodes mercilessly skewers network television, actors and the entitlement of the entertainment industry.

The show focuses on the married writing team of Shawn and Beverly Lincoln (Stephen Mangan and Tamsin Greig).  Shawn and Beverly have a BAFTA award winning UK television series called Lyman’s Boys.  Their show, which we never get to see in the series, is about an erudite headmaster at an elite boys’ boarding school and his unrequited love for the school’s lesbian librarian.  Lyman’s Boys is so successful in the UK that an American network executive, eager to develop a U.S. version of the show, all but throws himself at Shawn and Beverly as they celebrate their second BAFTA win.  Shawn loves the idea; Beverly has her reservations, knowing full well the American tendency toward unsophisticated boorishness.  Despite her initial reservations, the duo relocate to Los Angles only to witness their show’s degradation into a pandering sitcom featuring Matt LeBlanc as “Coach” Lyman.

From the outset, Episodes revels in its subversion.  Network executives are portrayed as either vapid tarts or narcissistic capitalists, utterly removed from the product that they peddle.  Playing a send-up of himself, Matt LeBlac embodies the vanity, privilege and superiority that fuels the rhetoric of those who would burn Hollywood to the ground.  This leaves Shawn and Beverly as strangers in a strange land, seemingly the only people who care about the fact that television can be a medium for art or at least something that isn’t wholly pedestrian.  They also embody that small shred of elitism that comes through being associated with British television. You know what I’m talking about; you’re at a party and somebody mentions a BBC documentary or a BBC television series and they are just a little smug about it.  There’s something to this person’s tone that suggests that there’s something wrong with you for not knowing about the program in question.  For this reason, more than anything else, viewers are likely to either be hot or cold in their feelings toward Episodes. In making fun of the American sitcom, the show is also saying something very pointed about the people who drive the market for such tedious entertainment.  Then again, you might be an unrepentant Anglophile with a graduate degree and an occasional penchant for the bawdy.  In that case,  Episodes will have you in stitches.

While Shawn and Beverly’s righteous incredulity may not appeal to all audiences, there is something to be said for their nature as “smart” television characters.  Granted, Beverly is regularly condescending of almost everything in America.  However, her attitude seems more like a defence mechanism against a world that is perpetually at odds with her very sensible creative vision.  On top of that, Beverly is forced to evaluate her life and her relationship when it is immersed in a world where everything is artificial, much like any other thoughtful person caught in the wake of our shallow popular culture.  Of course, this soul searching and utter dismantling of the Anglo-American special relationship is punctuated with crass sex jokes and physical comedy that blends American and British takes on humour.  Yet, Episodes isn’t just dick and fart jokes with a British accent.  The show marries the wit and depth of British writing with the comedic timing of an American sitcom all of which comes to a magnificent culmination in the first season’s final episode – I won’t spoil it, but that episode is the stuff of legends.

Then there’s Matt LeBlanc.  He’s not quite Neil Patrick Harris playing Neil Patrick Harris a la Harold and Kumar, but he’s pretty damn close.  Despite the egocentric vanity of the LeBlanc character, he regularly surprises the audience with occasional moments of depth.  In these moments, viewers are left to question if the character is just acting as a means to further his own selfish desires.  Moreover, do the glimmers of humanity that we see in Matt LeBlanc leave the realm of subversive satire and move into something more metatextual?  The fact that the real Matt LeBlanc is playing a character who plays an actor who played Joey and is possibly working on the Lincoln’s show as an act of contrition is much more depth than I ever thought possible from Matt LeBlanc – especially after that monkey baseball movie.  While I’m usually keen to award kudos to writers in moments like this, I have to offer some respect to LeBlanc for pulling the whole thing off.  I never thought I would say something like this, but Matt LeBlanc as Matt LeBlanc is one of the things that kept me coming back to Episodes.

It is my supreme hope that the rumours about a second season for Episodes are true.  The world needs more comedy that is so hilariously self-aware about the fact that it is using television to subvert television.  Let’s just hope that Episodes hasn’t burned its bridges for being so poignant about its medium.