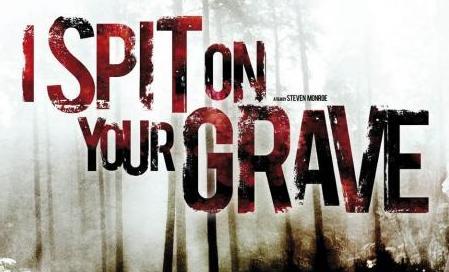 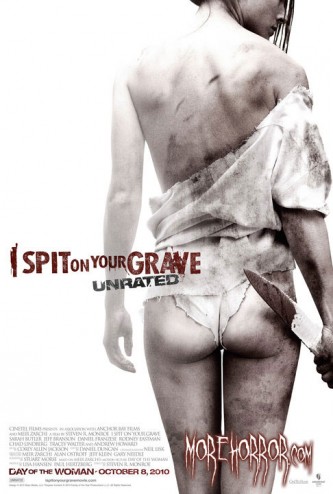 Summary Judgement:  If executed with more restraint and an ounce more psychological insight this film could have amounted to more than a story of rape-voyeurism and shallow revenge.

As a follow-up to my Scream 4 review, I figured I would look over something from the “gore-fest” genre that I mentioned in my last post.  I Spit on Your Grave is a reboot of 1978 film of the same name directed by Meir Zarchi. I haven’t seen the original.  However, I imagine it must have been better than the 2010 release based on the unoriginality of the latter’s script and the probability that its acting couldn’t really be any worse.

The story centers around Jennifer (Sarah Butler), a successful young writer who is raped, beaten and left for dead while on a writing retreat in the woods.  Rising from the ashes of shame and abuse Jenny proceeds to dispense some Old Testament style justice. To me, this seems like a good recipe for a revenge film. Movies like Double Jeopardy, The Brave One, The Glass House and Kill Bill have readily demonstrated that female revenge/empowerment makes for a great movie. Though cathartic in its premise, I Spit on Your Grave isn’t nearly as successful in its implementation.

From my perspective, rape is a topic not to take lightly. A story that decides to centralize rape as its theme walks a tightrope between respect for the gravity of its subject material and how graphic to make the details therein.  Where a good storyteller understands that much can be shown on screen without showing much at all, Stephen Monroe seems to have put it all out there in an attempt to seem edgy.  His decision to give a large chunk of screen time to Jenny’s rape may have at least one toe over the line to biastophilia.

Not only is I Spit on Your Grave voyeuristic, it is unapologetic therein.  One of the rapists carries a camera to film everything that goes on around him.  This perverse cinema verite also becomes a suspense builder for later in the film.  Of course, no rape movie would be complete without excuses for scantily clad scenes of the intended rape victim. Viewers are bequeathed with scenes of Jenny going for a run in a workout outfit that isn’t much more than a sports bra and boy-shorts.  There’s also a moment where she is doing the dishes in her underwear.  It’s enough to make me wonder if Mr. Monroe isn’t saying something about female attire and sexual assault.

I Spit on Your Grave’s only redeeming qualities involve the means that bring about Jenny’s revenge. Without giving too much away, they are spiritual cousins of the infernal devices in the Saw franchise. It’s with a with a mix of anticipation and horror that viewers are exposed to Jenny’s twisted engineering. Still, I had a problem with the maniacal looks that darted from Jenny within the revenge scenes.  The writing loses some credibility for framing Jenny’s actions within the realm of insanity.