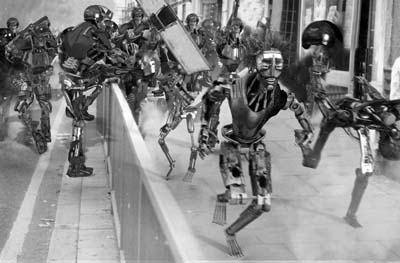 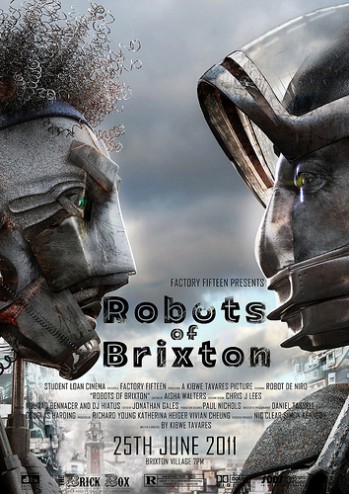 Summary Judgement:  Robot allegory does not get any better than this.

Written and Directed by: Kibwe Tavares

It’s hard to say where Robots of Brixton shines the brightest.  To call the movie’s visual quality striking is to tread deeply into the waters of understatement.  The power of the story’s allegory is so strong that even viewers who have never heard of the south London neighbourhood of Brixton will likely find themselves moved.  Perhaps the true strength of this work is that it conveys its grand message in a mere six minutes.

The short film offers an interpretation of the 1981 Brixton riots from the perspective of a lone robot.  This re-imagined version of Brixton is filled with detailed CG images of indigent robots amid a hodgepodge skyline that has risen to accommodate their numbers.  Scenes of a growing commercial centre, designed to cater to the vanity of the few robots and humans who can afford the luxuries of life, contrast against police shakedowns, public drunkenness, drug use and robot housing that looks to be made of garbage.  While I claim no expertise on the Brixton riots, the images within the movie seem to reflect some elements of reality; Brixton was a neighbourhood plagued with higher than normal unemployment, specifically among Black immigrants, abysmal housing, drug abuse and rising crime rates.

Recasting the Brixton rioters as robots invites some interesting analysis.  Better writers than me have written at length on fiction that reduces the individual to the level of the automaton with an urban environment.  Still, I’m fascinated by the fact that Robots of Brixton replaces not only Brixton’s citizenry with robots but also the metropolitan police force (Actually, Adam, official vocab guidelines say that were supposed to call it the police service as force as too many negative connotations).  I suppose the racial tensions that drove the actual Brixton riots put me in a place where I was expecting people to show up and disperse the robot rioters.  How then are we to read this robot on robot violence?

For the purposes of this film and its take on the Brixton riots, I suspect the message is that modern racial politics and identities are never as simple as humans versus robots.  The very nature of the police and rioters as synthetic beings accentuates the artificial differences that society imposes between the haves and the have-nots, between the forces of control and those who are controlled.  Case in point: as police robots tussle with the rioters, one robot becomes indistinguishable from another.  It is only when the police stand as one that they are identifiable as something separate from the masses.  I also find myself wanting to know how London’s police service broke down along racial lines in the early 80s.  Is it possible that this movie says something about black on black violence within the Brixton riots?

Robots of Brixton does require some suspension of disbelief.  It’s hard to imagine a free market economy that would allow the creation of so many sentient robots as to create widespread unemployment and precipitate a need for robot police.  However, details such as those must be kept within the lens of the enduring metaphors that drive this story.  Anybody not inclined to engage their mind with the film’s subtext should at least be able to enjoy an aesthetic quality will inflame the imagination if not a sense of political outrage.

Feel free to stick around for a screening of Robots of Brixton or head over Kibwe Tavares’ blog to check out more of his work.

Robots of Brixton from Kibwe Tavares on Vimeo.