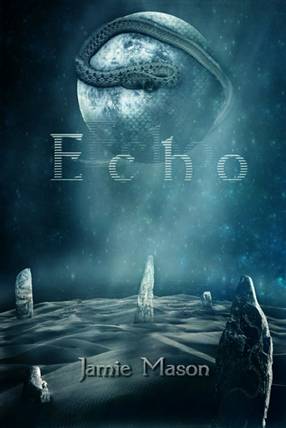 Summary Judgement:  This young adult novel offers a sophisticated and thoughtful piece of storytelling fit for any audience.

Before I get into the review, let me say something about my relationship with young adult fiction: I don’t really have one.  During my teenage years, influential English teachers saw fit to steer me to Isaac Asimov, Arthur C. Clarke and Upton Sinclair.  I think Sinclair got tossed into the mix when my sixteen-year-old self discovered Robert Heinlein and became a little too enamoured with libertarianism.  In truth, the only thing I’ve read that comes close to YA fiction is the Harry Potter series.  Keeping this rather limited experience in mind, I’ve attempted to approach Jamie Mason’s Echo from two perspectives: that of my current self and that of my teenage self who unsuccessfully ran for student government on a TANSTAAFL campaign.  Given that Echo pairs a traditional hero’s quest with an exploration of religion as a tool for social control, I’m happy to say that Jamie Mason’s debut novel holds up remarkably well under both lenses of scrutiny.

The story begins after the crew of the starship Echo abandon their vessel in orbit of a planet called Hegemony.  On the surface of Hegemony, the evacuees establish a primitive agrarian village.  To ensure that their descendents maintain a connection to their past life, the crew develops a series of nursery rhymes about their history, Echo’s location in Hegemony’s sky and rudimentary shipboard operations.  Within three generations, these nursery rhymes evolve into the stuff of mythology as the rigors of survival surpass all other concerns, including universal literacy.

Enter Sarai the Snake Girl and Petra the Tale Keeper, the respective protagonist and antagonist within the story.  Raised by a blind village exile, Sarai is a teenage snake hunter and outsider to society.  Petra, as Tale Keeper, is responsible for passing along the stories created by Echo’s original crew.  Where Sarai is an independent spirit, curious of the world around her, Petra is Machiavellian and intent on shaping the world to suit her own ends.  Recognizing that she alone can rewrite the oral history of the village, Petra transforms “The Tales” from a component of childhood education into a brutal dogma fit for the whole of society.  Subsequent murder and historical revision drives Sarai from the village wherein her character embarks on the archetypical hero’s quest.

Initially, history and religious appropriation didn’t seem like the most natural way to target the young adult audience.  However, Petra’s intrigues and Sarai’s quest tap into a myriad of tones that seem universal to the transition into adulthood.  Most obvious is Sarai’s nature as the outsider.  I suppose it goes without saying that an exile protagonist taps directly into the teenage zeitgeist.  Petra’s campaign of religious subversion, however, is a much more interesting plot device.  Part of the strength therein is the message that religion can be used as a tool for social engineering.  Mason presents his readers with a number of chilling scenes in which Petra’s religion of “The Traveller” strips people of individual agency, discards conventional notions of paternal rights, and heeds no regard for basic human dignity.  This particular plot device connects to the constant incredulity and tendency toward polemic discourses that I remember so fondly from high school.  Where my sixteen-year-old self would hold Echo above his head and cry, “This is what religion does to people, all people, everywhere,” I know just as many of my fellow teens would have folded their arms refusing to acknowledge the possibility that a handful of people can enslave others through lies and misdirection.

While adult readers will no doubt recognize the various historical allegories that Mason weaves into Echo, allegories which might move a youthful reader to learn more about humanity’s tragic attempts at social engineering, the book’s appeal to mature readers only begins at that point.  In a style that is noticeably not Rowlingesque, Echo empowers children and young people in the negative sense.  My mind instantly travelled to images of child soldiers in Rwanda when one of Petra’s chosen enforcers, a nine-year-old girl named Kyat, orders one villager beaten and herself flogs another villager to death.  There’s an unapologetic brutality in Mason’s writing that recognizes that young people have a capacity for cruelty that matches anything found in an adult.  With images such as this peppering the story, there is little time for scenes of maudlin angst, raging hormones or misdirected lust that would otherwise alienate an adult reader.

On a more general note, no review of Echo would be complete without mentioning the sophisticated nature of the prose.  At no point did I detect a passage that seemed condescending or patronizing.  Echo may be a young adult novel in title, but there is little doubt in my mind that sixteen-year-old Adam would approach this book as something that spoke to him as an adult. This is no small feat considering sixteen-year-old Adam’s giant and insufferable ego led him to believe that the only reason adults spoke was to patronize.

In trying to balance my critical perspectives, I did entertain the notion that some of Echo’s characters, including Petra, were a bit too shallow.  There’s nothing more to Petra’s power grab than a desire for power.  The “power for the sake of power” antagonist often strikes me as a bit flimsy.  Ultimately, though, I decided that it worked within Echo for two reasons.  The first is that teenage Adam’s favourite literary villain was Iago from Shakespeare’s Othello.  Some might call Iago evil, but I’ve always felt he was an individual who rejected the moral trappings of his society.  Petra, just like Iago, can’t come up with a reason why she shouldn’t manipulate others to get what she wants.  In that sense, what’s good for William Shakespeare is good for Jamie Mason.  I’m also inclined to dismiss suggestions of shallow characters on the grounds that this story follows the heroic cycle in a very traditional sense.  Sarai like Theseus, Perseus or even Achilles, is the only character whose background is important.  In this fashion, non-hero characters serve their purpose by providing depth to the hero and catalyzing their quest.

The only part of Echo that I found troubling was the occasional, and I do mean occasional, sections of parenthetical text.  As this book uses a third person omniscient narrator, I can’t see a need for bracketing certain parts of the text as direct asides to the reader.  Placing the occasional bit of exposition in parenthesises feels redundant and serves to break up the flow of an otherwise excellent paragraph.  However, the fact that this is the only actual criticism I have been able to muster speaks to Echo’s overall excellent quality.

At 200 pages, Echo is a short but pithy read.  Jamie Mason has done a wonderful job in constructing a novel that will connect with a youth audience while maintaining a disquieting tone that will appeal to any adult reader.

Echo is currently available as an ebook.  Click here to buy yourself a copy.