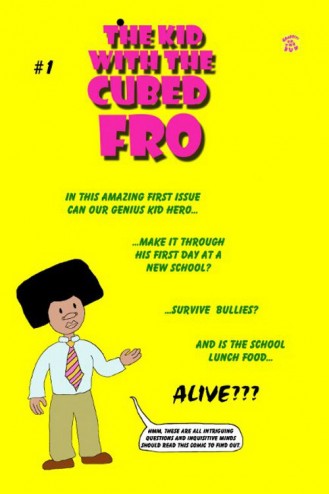 Summary Judgement:  I suppose the best word to describe this comic book is sloppy.  Very sloppy.

Story and art by: Martin Jackson

NB: Issue #1 of The Kid With The Cubed Fro was submitted to me for review earlier this month.

I’ve done a lot of hand wringing while trying to decide what I do with this review.  On the one hand, Mr. Jackson was kind enough to send me something to review.  At the same time, there are severe, almost crippling, problems with his comic book.  I don’t think it’s unfair to say that this issue reads more like a first draft than a print edition.  Much as I loathe slagging off the creative work of an individual, I think criticism is an essential part of helping to improve art.  Therefore, I decided to go ahead with this review with the hope that Mr. Jackson would take these words as genuine feedback, rather than an attack against his artistic vision.

The Kid With The Cubed Fro offers an interesting if absurd concept in its first issue.  The Kid, whose name we never discover, transfers to a new school.  Therein he runs afoul of a bully named “Ralp” and meets a girl named Zenubia.  Ralp is your run of the mill ass-hat.  Zenubia is a bit of a tomboy.  The Kid, himself, is a mystery save for the fact that he is written as a character who is too smart for school.  As The Kid bemoans the school cafeteria’s lunch, semi-sentient globs of meatloaf start to fly through the air.  Naturally, these meat cells form a giant meat monster.  Zenubia and The Kid take it upon themselves to defeat the meat monster through the construction of their very own vegetable patty golem.  The first issue ends with the monsters brawling in the cafeteria as aliens land in the school playground but only after the meat monster eats and shits out Ralp.

I’ve always found that a good comic review should ask two questions: how is the art and how is the story?  In examining The Kid With The Cubed Fro’s story, I’ve come to the conclusion that there isn’t one.  Its cliffhanger ending aside, the issue is vacuous.  There’s no conflict other than the aforementioned monsters’ brawl.  The characters themselves seem bereft of depth, in the literal and artistic sense of the word.  Even the dialogue doesn’t really work. In one instance, The Kid speaks at a level that seems befitting a PhD candidate, but a page later he’s as articulate as an Alaska governor.  Any temptation that I have to forgive these problems is summarily quashed by a litany of spelling mistakes, misplaced apostrophises, missing words and the various grammatical liberties that are taken throughout the issue.  Even the issue’s preamble, which serves to eulogize the late Gerald Lawson, a prominent African-American video game designer, is bloated with typos.  Perhaps the whole production is just too Dada for me to understand.

Then there’s the art.  I wanted to perceive the comic’s unique visual style as a nod to minimalism.  Unfortunately, it becomes very obvious very quickly that the style is, well, sophomoric if we are going to be polite about things.  The backgrounds look like crude sketches rather than proper environments.  In one instance the perspective within a panel is so bad that The Kid’s finger is drawn as long as his head.  This sort of inattention to detail is so blatant that it leaves me wondering about what sort of standards Mr. Jackson sets for himself as an artist.

The entire issue presents itself with a vibe of something that wasn’t quite ready to be seen by the world.  Although one very funny joke about school lunches and Jamie Oliver proves that Mr. Jackson can turn a phrase, this lone noteworthy panel is lost amid questionable writing, constant exposition and inconsistent art.  I suppose a younger audience might laugh at the issue’s singular poop joke.  However, I suspect even a middle-school aged person would turn their nose up at the typos and unremarkable drawings.  While I wish Mr. Jackson success in his artistic endeavours, The Kid With The Cubed Fro is as far from being viable as a comic can get.