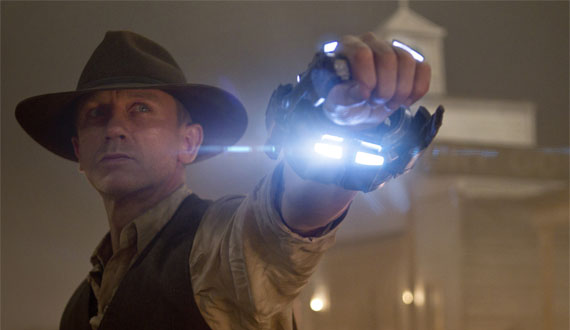 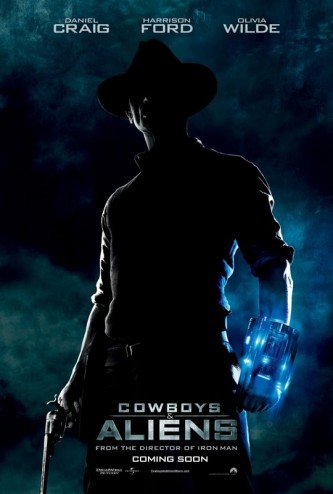 Alien exploitation of Earth’s natural resources as a metaphor for the white conquest of Native American cultures. A blending of the American Western and Science Fiction themes of utopian visions, including the sacrifices needed to achieve them. An eye-popping cinematic blend of science fiction’s wondrous visuals and the sweeping vistas of a Western.

Cowboys & Aliens is none of these things.

What is it is? A fun romp. Just don’t think too much about it.

If you’ve seen the trailers, you know the story. Jake Lonergan (Daniel Craig) wakes up in the desert with no memory and a mysterious bracelet on his wrist. Making his way to a small town, he gets in trouble with the law and the local cattle baron Woodrow Dolarhyde (Harrison Ford). Aliens attack, stealing people by lassoing them into their flying ships. Able to track a downed pilot, the town’s people set off to get back their loved ones. Along the way we learn Jake’s past and what the aliens want. (And, of course, how they’re intermixed.) There’s a big fight, the good guys win (but not without sacrifice), and Jake is able to resolve his conflicts with Dolarhyde and the law.

Jon Favreau handles direction very well, presenting a large cast of characters we can easily keep track of, injecting humour without forcing it, and presenting big, fun action scenes. Daniel Craig is solid as Jake, carrying off an American accent, but is basically James Bond as an Old West outlaw. Harrison Ford, though, turns what could have been a one-dimensional foil for Jake into a flawed, complex character. First presented as a ruthless Civil War officer turned ruthless cattle baron, through Ford we see a man scarred by war, who detests violence but understands its need, and is driven by distrust and racism borne from experience, not an evil heart. In this way, Craig and Ford do for Cowboys & Aliens what Christian Bale and Matthew McConaughey did for Reign of Fire — turn a straight-to-DVD movie into something better.

But that something better is a sci-fi / western mash-up romp. If you give the story too much thought, it falls apart.

First is the writing team: Roberto Orci, Alex Kurtzman, Damon Lindelof, Mark Fergus, Hawk Ostby and Steve Oedekerk. Too many hands on a script ruins it. While as a team Fergus & Otsby have credits for Children of Men, seeing Orci, Kurtzman and Lindelof—who brought us Star Trek, Transformers and Lost—had me thinking “Hmm, questionable science and promises of a larger mythology that will never be paid off.”

The science is abysmal. The aliens are large, fast brutes with pointed talons for fingers. They roar and growl, eager to engage in hand-to-talon combat where they spear or bite their enemies. Only a few use the energy weapon we see Jake using. We learn the aliens view humans like insects and underestimate them. I might swat one fly, but I’ll turn on the bug zapper for a swarm.  Wholesale swatting hardly seems befitting of beings that could construct a craft capable of interstellar travel.

And while Jake can’t miss with his weapon, the aliens never come close to hitting Jake. Not to mention how could a human operate a device with some kind of biological interface that’s designed for a biology from another planet?

Then there’s a unique physical trait the alien’s have that makes no evolutionary sense, especially the vulnerability it exposes them to.

Finally, the aliens’ ship takes off and (we have to assume) lands vertically, propelled by solid or liquid fuel. Not anti-grav propulsion or some mysterious blue, glowing engines—red and yellow flame. The space shuttle, a relatively light weight craft for its size, requires considerable external fuel tanks to launch into orbit. There’s no way the ship we see in Cowboys & Aliens could travel interstellar distances and land and take off from a planetary gravity well.

OK, let’s leave the science behind. What about plot?

Why do the aliens abduct people? We don’t know. Something about studying our weaknesses. But a few specimens would do the trick. No need for dozens. I didn’t get this.

So why do the aliens blow up the town as we see in the trailer? Um… no idea.

Why are the aliens on Earth? To take our gold, which is as valuable to them as it is to us. I’m willing to buy that. But there’s something about these aliens being scouts. Unless they are destroyed, we learn, more aliens will arrive and wipe out the Earth. You know, I would think that scouts NOT returning would attract more attention.

Something we don’t see in the trailers is a great visual hearkening back to Close Encounters of the Third Kind. But it’s never revisited or even explained. It might not have been the aliens at all. Maybe in the DVD extras?

Not to mention some plot annoyances. Like Jake riding off just before the final battle to search for the remains of his gang (even saying how hard it was to find them) and convince them to join the fight. All in the time it takes to have a conversation back at the aliens’ ship. Guess the Great Plains aren’t that great.

Or a tender moment as a character dies in the midst of the big battle. As the two characters say their good-byes, we don’t hear any explosions or see rampaging aliens, making me think the chaotic battle was over. Nope. A moment later, we cut back to the battle still in progress.

In the end, Cowboys & Aliens is not awful, but not great. In 6 months, you’ll forget about it.

Unfortunately for series creator Scott Mitchell Rosenberg, unlike Sin City, The Walking Dead or Kick-Ass, this movie doesn’t make me interested in the comic book from which it came.

Many thanks to Ken Berndt and The Comic Book Shoppe for the free pass.

Want to see more from Matt Moore?  Make sure to check out his Aurora Award Nominated short story, Touch the Sky, They Say.