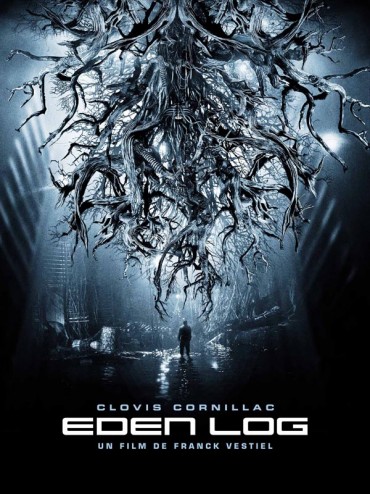 Summary Judgement: Buried amid its disjointed plot and bad dubbing there is something endearing to this sci-fi/horror mishmash.

During a conversation with a friend who teaches film studies I described Eden Log as a movie that makes absolutely no sense but it looks amazing for its effort.  His response to my observation was a rather direct, “Ah, so it’s pretty much like every French genre movie.”  I can’t quite decide if I should be afraid or encouraged by his generalization.  Either way, I’m of two minds when it comes to Eden Log.  On the one hand it is highly symbolic and genuinely original.  The downside is that I’d need a forensics team to go over the original French language version of the film before I’d be content to say I understand the story.

My first thought was that Eden Log was some sort of post-apocalyptic narrative; it turns out that I was totally wrong, but more on that later.  The story begins with a man, covered in mud, clawing his way out of the dark.  Drawn toward a flashing beacon, the unnamed protagonist enters a ruined facility that is populated with cobwebs and plants that look to have overgrown most of the machinery.  The man’s intrusion into the facility triggers a projection system wherein images of women speaking various languages offer a few precious bits of exposition.  Words like “citizenship, sacrifice, and paradise” stand out from the convoluted diatribe.  The plot begins in earnest when our amnesiac protagonist stumbles upon a man grafted into a plant.  This poor chap suggests that suicide is the only escape from a fate worse than death.

Even in these opening movements Eden Log is nothing short of gorgeous.  Its images are harsh yet seductive.  The inescapable grotesquery of seeing a man grafted into a plant offers a powerful promise of narrative depth.  What sort of civilization creates biogenetic technology that lets a person merge with a plant?  And while I was drawn to the story in the same way that the protagonist is drawn to anything that might offer some clue as to who he is and why he is in the Eden Log facility, problems with the movie are evident very early on.

Language is really at the crux of Eden Log’s troubles.  More specifically, the version I watched, the official North American release, has English dubbed in over the native French.  This frustrates me to no end.  Beyond the fact that dubbing opens the door to dubious translations for the sake of convenient lip synching, dubbing always strips away the tonal quality of the acting and replaces it with somebody else’s impression of the actor in question.  When the man grafted into the plant flies into a fit of histrionics his face shows a world-weary torment while his voice comes off as merely angry.  It’s a distraction that comes at the cost of nuances in the acting and stands as evidence that the fine details of the film may be getting lost in translation.

The only thing that saves Eden Log from being a total train wreck is the strength of its visual quality.  Indeed, I think it is fair to say that the movie is at its best when the actors aren’t speaking.  The filming style itself seems to be an extended metaphor that follows the protagonist as he works his way toward the surface of the Eden Log facility.  When the protagonist is covered in mud the camera work is rough and jarring, mirroring the character’s state of mind and movements.  Sets are similarly constricting and claustrophobic as he tries to reconcile his amnesia.  His ascent through the facility sees wider camera angles, bigger sets and a gradual shedding of the initial mud as he learns more about the corpses, mindless brutes and lone botanist that populate the subterranean world.  Upon his return to the surface our protagonist rediscovers his name and finds himself dressed in a sharp military uniform.  Only then, when he is at his most civil outward appearance, do we come to understand why he is more hideous there then when he was covered in mud a la Swamp Thing.   Where the dialogue fails to deliver, the essential themes of the movie are evident through director Franck Vestiel’s cinematic style.

It is only in Eden Log’s penultimate scene that things get particularly messy on all fronts.  The scene, which is mostly exposition and proves that the movie is not a post-apocalyptic tale, shifts gears into the realm of corporate dystopia.  The relationship between Eden Log’s technology and the plants that seem to have overrun everything in the facility is explained but not in any way that should suggest clarity or closure – see previous paragraph on linguistic barriers.  In the end, we are left with a story seems to be about immigration, exploitation of labour and distrust of authority – how very French.  It’s not bad, per se, but it’s about as intuitive as single variable calculus.

Should you watch Eden Log? Maybe.  The concept is unique enough, so far as contemporary movies go, that it merits some attention.  If you secure a subtitled French language version of Eden Log then you might stand a chance of actually understanding all of the story.  While tracing the trajectory of the plot requires a compass and sextant, the visuals convey enough of the movie’s essence as to make the overall experience a positive one.  Although Eden Log comes nowhere close to offering universal appeal, fans of genre media might find this an interesting diversion from summer blockbusters.