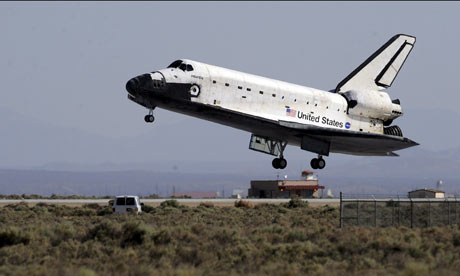 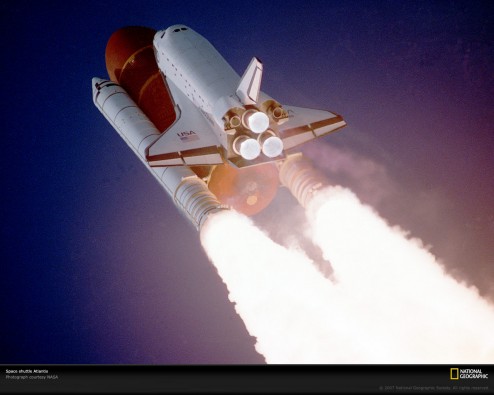 The Short Version: Is anybody else afraid that the sun has set on humanity’s ventures into space?

The Long Version:  Sometime between my passing out while reading a Jack Aubrey novel and my cat deciding that his need for breakfast far outweighed my desire for slumber, humanity ended a significant chapter in space exploration.  This morning at 5:57AM ET the space shuttle Atlantis touched down in Florida to a crowd of 2,000 supportive on-lookers.  I read this news and couldn’t help but feel a profound sense of loss.

The space shuttle program is only slightly older than I am. As such, shuttle missions have been a ubiquitous part of my life. Now America’s future in space – and Canada’s because let’s face it, when it comes to space exploration we’re a nation of hitchhikers, hangers-on and skilled adjuncts – lay in Soyuz modules, yet to be built American rockets that make me think we should just rebuild the Saturn V series, and free market space entrepreneurs.  In Richard Branson we trust? How very disheartening.

With the American government on the verge of defaulting on its fourteen trillion dollar debt, I can’t find it within me to get excited about NASA’s plans for building an experimental craft that might take us back to the moon.  Cuts to NASA’s budget, just like the space shuttle, have been a constant in my life.  Even in Clinton’s post-Lewinsky years, a time I like to call the “Big Willy’s bulletproof bonanza”, I can’t recall any public rallies that saw massive increases in NASA’s budget.  Hell, NASA is the venerable poster child for doing more with less.  Considering the world in which we live, I find myself hard pressed to put any stock in the timely execution of an exploration program that will require the construction of new launch facilities as well as the crafts themselves.  Too bad space exploration isn’t “good” for the economy.

Oh sure, back in the 50s and 60s, space exploration was great for the economy.  Smarter people than I have already charted the relationship between early space exploration and the birth of consumer electronics.  In the intervening years, however, consumer electronics grew up and moved out of its parents’ basement, so to speak.  Now the processing power that I use to run a game of Starcraft or record a podcast could power ten space shuttles in simultaneous orbit.  Barring the discovery of Helium-3 a la Duncan Jones’ Moon, where’s the fiscal argument that is going to drive the next wave of space exploration?

That lack of immediate and tangible benefit fuels a public malaise about space exploration and the space shuttle mission that vexes me more than anything else.  The refrain always begins with, “Why should I care about space when…”  It started one March Break when lil’ Shaftoe and family were in Florida and he got to watch an actual shuttle launch. When I returned to school and bragged about how I was going to become an astronaut, one of my classmates, a born-again Christian named Kathleena, snarked that people had no business in space because there were too many problems on Earth.  Ever since that day, it’s been the same tired line.

The best answer I can come up with is that space exploration is as much about exploring the Earth as it is exploring that which lies beyond.  Modern climatology, geography, oceanography and countless other fields couldn’t exist as they do without the capacity to look down upon our planet.  These are the sciences that will be essential in helping humanity deal with the fact that we will soon find ourselves living on a planet populated by ten billion people.  Bad as are problems are now, they would be worse without space exploration.  In retiring the space shuttles, I fear that North America is losing a vital tool in its ability to examine itself, its role in the world and how we might be better stewards of this planet.

I recognize the challenges of creating space vehicles for a world where innovations in computing, nanotechnology and human biology are ever present.  The shuttle fleet were analog devices that survived the digital era to sail into aerospace Valhalla on the cusp of the quantum era.  That is no small achievement.  Still, the question remains, does the completion of the space shuttle mission move America into the company of the Greeks, Romans, Byzantines, Spanish and British?  Is America a nation whose reach has finally exceeded its grasp?  If the epoch of American space exploration is indeed at its end then I can only hope for a timely and suitable successor.  The Earth can ill afford humanity turning inward upon itself.

Arrivederci, Atlantis.  Let’s hope we don’t go the way of your namesake.