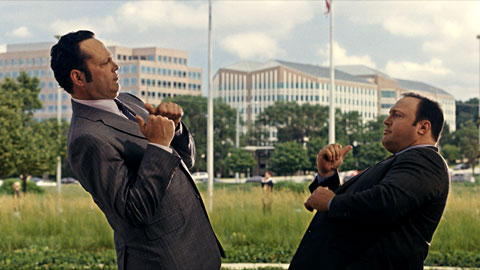 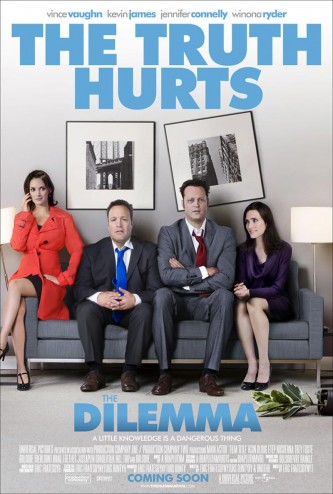 Summary Judgement: A unique if not entirely successful attempt to deviate from the usual clichés of the romantic comedy sub-genre.

Directed by: Ron Howard.  Wait, THE Ron Howard?  Oscar award winning director Ron Howard?  The same guy who did Frost/Nixon and Apollo 13? Seriously? Okay, if you say so.

Yeah, I know, it’s not a genre movie.  I was at a friend’s house drinking wine with a group of people and we ended up watching the The Dilemma. The movie surprised me enough that I thought it just to offer some words in its praise.  While I wouldn’t go so far as to say that The Dilemma is a good movie, it is different enough to merit some discussion.

The premise is fairly simple: Ronny (Vince Vaughn) catches Geneva (Winona Ryder), the wife of his best friend Nick (Kevin James), making out with Zip (Channing Tatum) in a botanical garden.  Ronny then spends a week trying to figure out when, how, and if he should tell his best friend about his wife’s infidelities.  Attempts to resolve the dilemma only draw Ronny deeper into the quagmire that is Nick and Geneva’s dysfunctional marriage as well as creating a subsequent comedy of errors that orbits Ronny’s life.  The net result is a rather unsettling, but authentic, look into the decay of one particular union.

Though ensconced in the trappings of conventional comedy, the air of honesty about The Dilemma’s plot is one of the few things that endeared the movie to this reviewer.  Though the characters have their redeeming qualities, they are all damaged people in one way or another: Ronny is a recovering gambling addict, Geneva pairs her fidelity problems with a vindictive streak straight out of Shakespeare, and Nick hides in his work for days at a time.  The only character who actually comes across as reasonably well adjusted is Ronny’s girlfriend, Beth (Jennifer Connelly).  Of course, being the most normal character earned Beth the least amount of screen time among the primary cast – quite the loss actually, as Connelly’s acting chops put those of the others to shame.  I don’t care if Winona Ryder was in Girl, Interrupted; Connelly was in Requiem for a Dream and that movie still haunts my nightmares ten years later.

Yet for all of The Dilemma’s attempts to turn the rom-com on its ear, the story is bound to the seemingly immutable laws comedic script writing.  Nearly every comedy I have seen in the last twenty years starts with a loveable scoundrel who faces a seemingly impossible challenge. The hero rises to half the occasion before falling to a point that is worse than before he or she started the quest.  After a pep talk/revelation/moment of clarity, the hero rallies and wins the day at the end of the third act.  Even a comedy as layered as Dodgeball follows this plot path.  In this sense, The Dilemma, is no different than any other witless comedy of the last quarter century.

Thus, while the comedy is dark, at times bordering on black, it’s also quite predictable.  It is, however, worth noting that a few unexpected outcomes allow the movie to sidestep some of the pratfalls that so often accompany the comedy genre.  Still, moments of black comedy always come nicely bracketed between time-tested guffaws and Vince Vaughn’s sophomoric shenanigans.  What’s worse is that about 65% of the jokes in this picture never rise above the level of slapstick.  Even when Vince Vaughn channels Jason Segel’s “give it back” speech from I Love You, Man, it comes off as nothing more than a tedious nod to some pedantic expectation of comedy ought to be.  The two approaches seem perpetually at odds with each other within the narrative.  It’s enough to make me think that there must have been some creative conflict within the movie’s production.  Somebody wanted to subvert the rom-com vis-a-vis Tropic Thunder and this Jekyll and Hyde of a movie is the result.

Then there’s the soundtrack.  It’s been my experience that most comedies are content to pillage from the Top 40 of the day in producing their musical accompaniment. The only piece of pop music I recognized within The Dilemma was The Fratellis’ Chelsea Dagger – which is fine because I can listen to that song for hours on end.  Hans Zimmer composed the rest of the movie’s music.  That’s right, the same Hans Zimmer who gave us the Inception “Brawwgnnnggghhhhh” and the Gladiator soundtrack scored a Vince Vaughn comedy.  With Hans Zimmer in the background, otherwise throwaway scenes feel of the utmost importance.  There was tension, genuine fucking tension, when Ronny’s exploration of Geneva’s infidelity leads him to investigate Nick’s loyalty to the marriage.  Any other movie would have tapped the Spy Hunter theme and I would have gone to refill my vino.

It’s tough to put a bottom line on this movie.  Perhaps it is trying too hard to be avant-garde while still mucking about in the safe harbour of Hollywood comedy. Still, there’s enough that is surprising and unexpected within the movie as to make up for a few painfully awkward scenes and product placement that would make Michael Bay blush.  It’s certainly not great, and it might not even be good.  Yet, it is different, and different is good enough for me when it comes to Hollywood comedy.