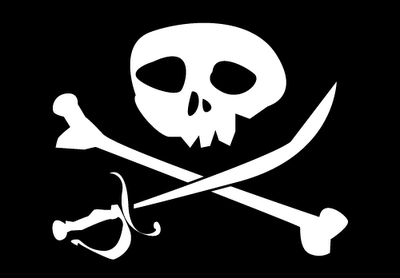 Air, Water, and Road was not what I was expecting.  Hell it wasn’t even what I wanted to review this week.  In celebration of the Space Pirates and Zombies launch, I wanted to dedicate this week’s Fiction Friday to a space pirate story.  After hours of googling I couldn’t find anything that wasn’t anime fan fiction (so much Captain Harlock fan-fiction) or pure unadulterated crap.  When I came across Air, Water, and Road and saw “They’re bus pirates. You don’t mess with bus pirates” in the caption, I knew I had found a winner.

Although the plot is straight forward, the way in which it unfolds and the mythology that it builds is nuanced and layered.  Air, Wind, and Road tells the story of a young woman named Asia.  One day Asia and her friend Jaz are walking to their mutual friend Dave’s house, when a pirate bus – that is to say an open air bus made to look like a sail boat – passes them on the street.  Jaz wants to get away from the bus.  A primal and inexplicable attraction draws Asia toward the vehicle.  When the bus stops in front of her, Asia allows herself to be brought on board.  Despite a living figurehead bound to the front of the bus like the stuff of a fetishist’s wet dream and the unsavoury state of the crew, Asia refuses to leave.  Therein, the bus’ captain begins grooming Asia for a command of her own.

To the author’s credit, Air, Water, and Road makes fantastic use of the first person-present tense narrative.  In fact, the agency conveyed through that style of writing nicely juxtaposes the themes of submission and dominance that run rampant through the story.  The rigging on the sail of the pirate bus is described as being dipped in latex.  People within the pirate’s home port are clad in “…in silks and leather, latex and lace, feathers and fur…” And did I mention the bound and gagged living pirate bus figureheads?  I did?  Ah, well then.  The message, I think, is pretty clear; piracy within this story isn’t just sexy, it’s about control.  The nature of that control, however, is a bit more nebulous.

In its strictest sense, piracy is about taking wealth while rejecting the laws of civilized nations.  Though subtle, the piracy within this story has more of a Mad Max feeling; the roaming gangs of bus pirates read like a response to urban/national decay rather than a desire to make a fortune off the backs of honest mercantilism.  Yet the piracy itself is nothing so simple as controlling through bullying.  Connected to the chthonic mythos that is woven into the story is a distinct tone of submission.  When Asia takes up the mantle of piracy she is submitting herself to something greater, a history that goes beyond the limited borders of her world.  It’s nothing short of fantastic to see a paradigm shift within the piracy narrative accompanying the creation of a mythology.

Though the story is thought provoking, it is a potentially challenging piece to read.  There is a subtle quality about the writing that took full advantage of this reader’s preconceptions.  Where I expected metaphors, the story was being literal and that caused me to miss the crux of Asia’s voyage until it was hanging plain in my face.  It’s quite the clever trick, actually.  However, it is one that led me to read the story again to be sure I had a handle on things. Smart readers will heed the bus captain’s advice and, “…just let her talk to you.”

At first, I was inclined to think of this story as a coming of age piece.  When the main character is drawn into a world that bombards her with dangerous and risqué sexuality, it seemed a logical connection to make. But upon further consideration I think that is an oversimplification of something that is much more complex.  The story provides enough hints to make a clear case for Asia as a fairly self-realized person before she gets on to the bus.  While the experience on the bus is transformative, I don’t think it necessarily “grows her up”.  Again, the theme that permeates this story is one of control.  At the end of the story, Asia is in control of a pirate bus but is also enthralled to something greater.  Who is dominant between Asia and that force is certainly grounds for debate.

I only took issue with one thing in this story.  Within its first few paragraphs the prose feels jarring.  I’m certain the choice of words and lack of indefinite articles is done intentionally so that the text, in its structure, reflects the nature of the pirate bus.  In fairness, I doubt this nod to stylistic writing will scare anybody off, but it did stand out in both of my readings.

Through it seems that Aynjel Kaye has dropped off the writing scene, Air, Water, and Road remains an excellent piece of story telling.

You can read Air, Water, and Road at Strange Horizons Magazine.