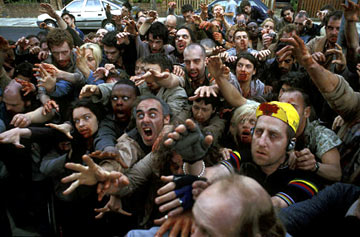 Summary Judgement:  A fantastic piece of flash fiction that subverts the tropes of the zombie apocalypse while exploring a disquieting vision of a post-human future.

What to say about Ascension? I suppose I could come out and say that it is the best piece of horror fiction that I’ve ever read.  Although, I’ve been told that a good reviewer is never supposed to be so direct in their praise as it may come off as being too obsequious.  But when a story works as well as this one does, there’s really no need to be circuitous with the praise.

Ascension beings amid an outbreak of zombification.  The nameless narrator introduces readers to a description of chaos in the form of shambling bodies, panicked onlookers and feasting un-dead.  In that sense, it is everything that I would expect from a thoughtful piece of zombie fiction.  Mr. Moore, having thoroughly convinced me that I was sailing in familiar waters, then fired a broadside wherein the narrator, who I assumed to be a survivor, was actually in the midst of transforming into a zombie.  That is where the fun begins.

While zombie-like in their desire to feast upon the flesh of others, Matt Moore’s zombies retain aspects of their individual self.  Moreover, a shared consciousness emerges among the zombies.  It’s the sort of idea that would have Carl Jung wetting himself as he ran for the safety of the Swiss Alps.

Save for the flesh eating, Moore’s creations seem more like a “bio-Borg” than traditional Romero zombies.  Moore’s creatures are living dead rather than simple walking dead.  On that note the story forces me to consider questions of zombie sociology, perhaps even zombie religion.  The question begs to be asked, has Matt Moore created something that is genuinely new?  I’m too much of a horror neophyte to say that it has never been done before, but it certainly hasn’t been seen within the last twenty-five years of popular culture.  Even when depicted in Max Brooks’ World War Z, a novel that I consider a high water mark for horror, zombies are things to be killed, not studied and certainly not treated as something post-human.  The very notion of zombification as evolution is utterly creepy, but I can’t help but want to know more.

The title of the story is also quietly subversive.  As the narrator feeds upon bits of scalp that he – or she as Moore deliberately plays with gender pronouns within the story – tore from the head of a frantic teenager, he/she states that, “Only my body desires this flesh. To feed. To spread this special death so we can change, leave, ascend.”  As a metaphysical event within genre fiction/literature, ascension stirs images of transformation into an energy based life form a la Stargate SG-1’s Dr. Daniel Jackson.  The notion of becoming something grander through violence and cannibalism is an absolute anathema to the spiritual purity that is commonly associated with rising to a higher plane of existence.  Again, Moore offers a contrasting idea that is simultaneously grotesque while wholly seductive from a literary perspective: where the Borg would augment an individual into their collective, Moore’s bio-Borg literally consume vessels of life essence to transform it into something new.

From that perspective, Ascension is very much a story about surrendering one’s individual agency.  In comparison to the conventional zombie story which is all about the survival of self and self-identity, Ascension is explores the struggle to abandon one’s ego.  What I find particularly interesting therein is the story’s urban setting and the narrator’s reference to other cities around the world.  I can’t help but wonder if this is some sort of enduring metaphor relating to questions of autonomy and community within urban spaces.  Consider that cities are their own sort of collective where people augment themselves to suit the environment.  In dense urban areas it is normal for humans to live on top of, next to and below other people.  Add a global computer network to that claustrophobic isolation and perhaps we can, in the words of the narrator, “…see everything through everyone’s eyes.”  In an era of addictions to social media, online multiplayer games and cybersex, the desire to “ascend” is closer than we might think.

Matt Moore has proven his masterful talent in using flash fiction to create a rich and thoughtful world.  Ascension emphasises the living in “living dead” to create a unique demarcation from the established forms of zombie/horror fiction.  Now will somebody please give Mr. Moore a bucket of scotch, an empty room and a blank cheque so he can write a novel of this calibre.

The full text of Ascension can be found on AE: The Canadian Science Fiction Review.

You might also want to check out Matt Moore’s Aurora Award nominated short story, Touch the Sky, They Say, also found the Canadian Science Fiction Review.  Make sure to check out Matt’s blog for details on how you can vote for his story in the Auroras.