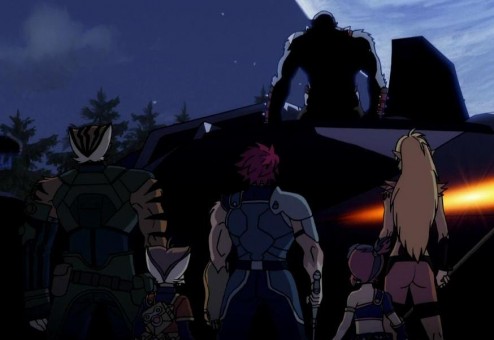 Summary Judgement: Not the best episode to date.  The very existential build-up is spoiled with simple optimism and a grand Deus ex Thundercat.

“Song of the Petalars” isn’t the worst twenty-two minutes of television that I have seen.  While it stands out as the weakest of the four episodes to date, it’s still a decent attempt at story telling.  It’s also the most existential piece of North American animation that I have seen in quite some time.

The plot picks up with General Slithe and the lizard army in pursuit of the Thundercats.  Only a day behind the cats, Slithe orders his troops to triple their pace.  Meanwhile on planet “lets break the tension from the previous scene” WilyKat dares WilyKit to kiss some sort of giant frog thing.  The scene is annoying, obnoxious and I can’t imagine it appealing to anybody who has a mental capacity greater than that of a parsnip.  Away from the noise of the cubs, Lion-O is pensive bordering on nihilistic as he ponders his next move.  Shetara, in a supportive and potentially romantic gesture, lays her hand upon Lion-O’s reminding him that he has her support and that all the Thundercats have hope for a better tomorrow because of him.  Thus do we learn the theme for this week: hope.

Before anything else can transpire, Snarf, like some sort of insane Pokemon, alerts Lion-O to the approaching lizard army.  Rather than fight a suicidal battle, Lion-O orders a retreat.  Tigra does not like this idea.  Indeed, Tigra reminds Lion-O that “Thundercats never retreat” and that hope is born of action.  Defiant Lion-O then rebukes his brother by pointing out that their father took action and he died for his trouble.

Escaping into a dome-like bramble patch, the cats come upon the Petalars – a race of pint size bipedal plant creatures.  Unaware that the Thundercats are watching them, the Petalars have gathered to witness the birth of a new seedling while one of their elders withers and dies.  Turning to the seedling, the elder plant says that, “Life is a precious gift, and not one you can keep forever.”  Then she dies.  How very apropos.

Remember the 80s, when nobody ever died in cartoons?  I’ll give Thundercats top marks for not holding back on the realities of life.

Using the Sword of Omens as a machete, Lion-O carves a door into the Petalars encampment.  Although the tiny plant creatures are terrified at first, one of their youngest, Emmerich, is overwhelmed with curiosity.  Through Emmerich, the Thundercats learn that the Petalars are not native to the brambles.  A great wind fell upon their native “garden”, casting the entire Petalar civilization adrift.  Having spent generations living in the Briar Woods, the Petalars are searching for the legendary Cliff of Winds so that they might find a way back to their garden.  Thinking that the cliff might offer a way out of the Briar Woods and away from the lizards, the Thundercats join with the Petalars.

Emmerich quickly takes to emulating Lion-O, wanting to be both a great leader and a warrior.  Though a little cliché, Lion-O encourages the boy to enjoy his childhood, stating that he will miss it when it’s over.  Shortly into a lesson in sword play, Emmerich and Lion-O are attacked by some sort of hybrid toucan/pterodactyl thing.  Grabbing Emmerich, the beast flies off into the distance.  Lion-O makes chase as the boy falls to the ground.  When Emmerich emerges from the brambles, he meets Lion-O not as a boy, but as a teenager.

A confused Lion-O turns to Shetara, who then drops a philosophical bomb on the audience.  She quotes Mr. Spock an anonymous Thundercat philosopher: “Time is relative.” The Petalars live out their entire life in the course of a single day.  As the march to the Cliff of Winds continues, the camera pans through the growth of new seeds and the withering death of elderly plants.  It’s all very circle of life, but in a much more forthright way than one would expect from a “children’s” cartoon.

Meanwhile, General Slithe and his army have tracked the cats to the Briar Woods.  Despite clear cutting through Third Earth’s forests with mech’ mounted rotary saws, Slithe’s forces are unable to slice through the Briar’s thick vines.  Impatient for his victory, the General dispatches a team of lizards into the Briar to try and flush out the cats.

Pondering the Petalars short lifespan, Lion-O muses on how anybody can ever make a difference in the world with kingdoms and empires constantly rising and falling.  A slightly older Emmerich offers his wisdom to Lion-O, stating that life offers many chances for a person to make their mark in the world.  It’s a bit of a cheap answer to an age old philosophical question.  Despite the cop-out, Lion-O seems stirred by the words.

As the troupe of plants and cats approach what Emmerich believes to be the entrance to the Cliff of Winds, Slithe’s recon squad strikes.  The bushwacking lizards quickly overwhelm the cats.  Calling upon his fellow Petalars, Emmerich rallies his people to the cats’ aid.  Armed with pollen power, the Petalars blind the lizards, allowing for a truly epic moment that sees Lion-O backhand a lizard with the Sword of Omens’ pommel. A few more lizards get the piss knocked out of them before anything cold blooded is left to rot as the cats continue onward.

When Slithe’s team does not return with the cats in tow, the General deems his lost troopers expendable and orders the Briar Woods burned to the ground.  What a dick.

Inside the woods, the cats and plants continue through the brambles. Having followed an ancient Petalar map to the supposed location of the Cliff of Winds, they find yet another dead end.  Enter Lion-O’s pessimism.  “Maybe there is no Cliff of Winds.  Maybe the map is a lie.  But why?”

When Emmerich suggests that the map was created to give his people hope, Lion-O rebuts with another hard question, “Is that all hope is, an illusion?”  Good question, Lion-O.  Unfortunately, there’s no time to explore that idea with the flames from Slithe’s arsonists closing in. However, the fire produces an unexpected result; its updraft creates a wind that is strong enough for the Petalars to take flight.

As one might expect, when it is Emmerich’s turn to take to the sky Lion-O finds him transformed into a withered old husk.  Saddened, Lion-O apologies for not being able to get Emmerich home.  With his final words – so many final words in this episode – the old plant tells Lion-O that life is about the journey, not the destination.   And then he dies surrounded by tearful Thundercats.  Upon witnessing the death of his friend while the remainder of the Petalars take flight for their voyage home, Lion-O reverses his previous policy of tactical withdrawal and orders a very suicidal attack on the Lizard army.

How the hell does, “Life is about the journey” translate to “go ahead and get all your subjects killed.”  Was the Book of Omens replaced with the Zapp Brannigan book of leadership when I wasn’t looking?

““Thundercats don’t retreat”, Lion-O proudly proclaims before an obligatory thunder, thunder, thunder, Thundercats HO!  Yes, they don’t retreat, except for when they do.  The change in mood is all a little too convenient.  While Emmerich’s life and death have all the emotional gusto of a Russell T. Davies’ written episode of Doctor Who, the existentialism went away far too quickly.  At least in last week’s episode Lion-O was able to see a clear line between a good leader and a pathological one.  This week felt too convenient.

Anyway, the cats proceed to mix it up with the lizards.  They’re holding their own until the ‘mechs open up on them with energy weapons.  Huddled together, Tigra and Shetara offer a cursory pre-death salute to Lion-O’s courage.  Right, courage, that’s what constitutes leading one’s team to their death.

Seriously, why did the two of them think this battle was a good idea? What about the Book of Omens and Jaga’s last orders?

Just as the lizards are about to make their kill, one of the ‘mechs explodes, then another and then a third.  A silhouetted vehicle, which is obviously the Thunder Tank, devastates the lizard army.  The mystery vehicle comes to a stop in front of the cats.  Concealed in shadow, the driver stands alone.  One last very stupid lizard jumps on to the side of the vehicle before attacking the driver.  Without flinching, the driver nunchucks the lizard right in the face.

““Who are you,” asks a nonplussed Lion-O.

So on the positive side Pathro’s back.  On the downside, the episode could be looked at as a bit of a throwaway that resolved itself with a Deus ex Thundercat in the 11th hour.  How would I have done it differently?  All the elements of a solid story were there.  The writers simply needed to change the order around so Panthro saves the day at the start of the episode and Lion-O is left exploring hope in the complex way that he first approached the subject.