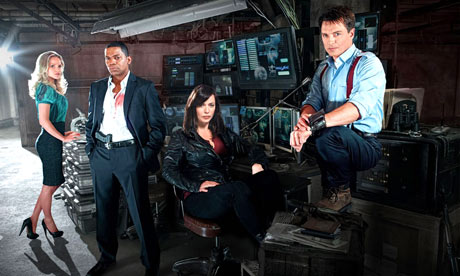 Question of the Day: Is Torchwood still Torchwood?  You tell me.

I’ve never made a secret of the fact that I am a huge Doctor Who/Torchwood fan.  Like most Torchwood fans, I was excited when rumours started to circulate that Russell T. Davies and Julie Gardner had a fourth series in the works.  Then I found out that it was going to be set in America and co-produced with Starz.  Sufficed to say I had a bit of “Oh god they’re going to screw up my show” anxiety in the lead up to Miracle Day.

While pacing is a consistent problem within Torchwood’s new iteration, especially when compared to the break-neck pace of Children of Earth, I found the most recent episode to be a bit of a watershed moment.  For the first time, Torchwood really feels like itself again.  Furthermore, episode five, The Categories of Life, felt consistently thoughtful from start to finish.  Gone are my fears that the plot arc has been stupefied to suit a broad international audience.

Being the internet geek that I am, I tweeted my Torchwood thoughts on Monday.  Surprisingly enough, somebody was listening.  @somecanuckchick told me that she thought the show was “watered down and tepid compared to the Tochwoods that came before”.  In this fashion we traded a few tweets with each other.  While I respectfully disagree with her sentiments, a couple very valid questions came out of the discussion.

1 – Is Torchwood still really Torchwood?  In the clip below, Rex offers a snarky comment that could be construed as a meta-criticism of the show.

2 – Does Torchwood carry an attitude of homophobia despite what @somecanuckchick called ‘a few scenes of Barrowman love’?

Personally, I don’t think it does.  I won’t deny that Jack’s sexuality was toned down for the first few episodes.  However, I think that was for the benefit of the new American audience.  Within a country that has refused, at the national level, to recognize equal civil rights for non-heterosexuals, there’s probably a need to warm up the audience to an openly pansexual character.  At the same time, I can certainly understand how Rex’s attitude toward Jack can be construed as a homophobic undertone – see the clip below.

My take on it is that the audience is meant to recognize that Rex’s homophobia is a retrograde outlook on the world.

I’m curious to know what everybody else thinks, though.  Why not take a minute to answer my poll or leave a comment on the post.