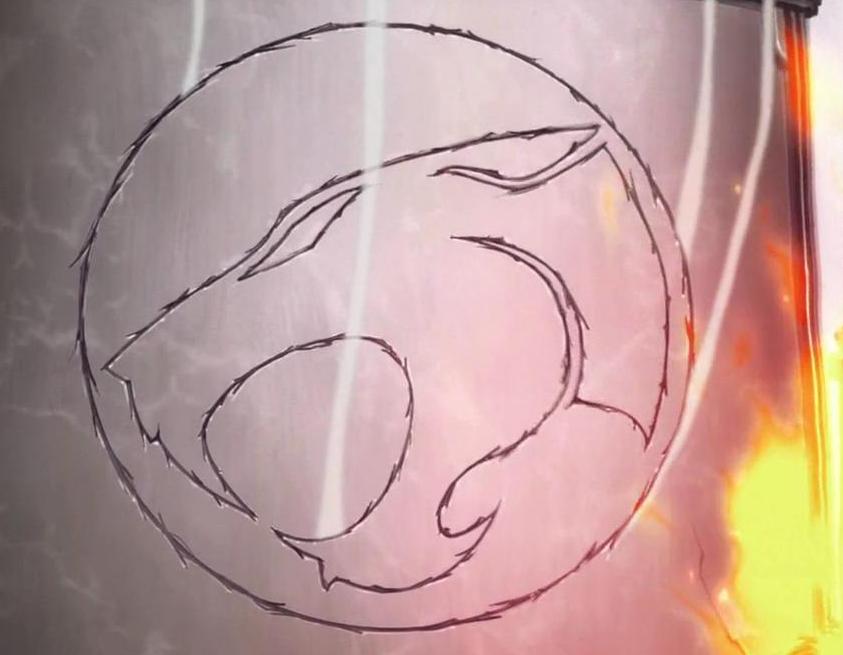 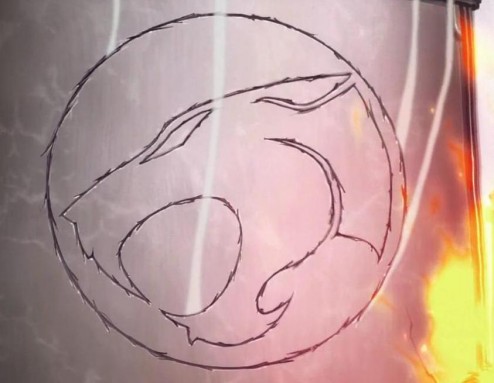 After its rousing premier, I feared that this week’s Thundercats would take a very sudden and decidedly kid-friendly nose dive.  To my infinite delight, this was not the case.

The story begins with a camera pan over the ruins of Thundara.  Lizards are looting the city for its valuables while WilyKit plays a sad little song on her ocarina.  With quiet reverence Shetara, Tigra and Snarf preside over the funeral pyre of the fallen King Claudus while Lion-O carves the Thundercat crest into a wall as a memorial.  Although Jaga’s final words to Lion-O were to seek out the Book of Omens, the newly minted lord of the Thundercats hungers only for revenge against the traitor General Grune and Mumm-Ra.  Rather than follow instructions, Lion-O orders an expedition across the Sand Sea to Mumm-Ra’s lair.

Fans of the original series will remember when Lion-O’s inexperience as a leader led to quiet chiding from the other Thundercats followed by a good laugh then a lesson in fire safety.  Now, when Tigra questions Lion-O’s judgement stating that he is obviously angry, Lion-O snaps back with a rage fuelled “I should hope I’m not the only one.”  The new king is desperate to prove himself worthy of his father’s legacy, a father who Lion-O envisions would have already dealt with Mumm-Ra were it Lion-O or Tigra on the funeral pyre.

Meanwhile, WilyKit and WilyKat are busy stealing Thundercat plunder back from the lizards and scavenging through the battle damaged remains of Grune’s army.  When the cubs stumble upon Lion-O and company, they serve their only useful purpose within the episode: stating for Thundercat and audience knowledge alike that they hadn’t seen any other cats alive in Thundara.  Methinks that there will be an upcoming episode with cats pilloried for the delight of lizards.

Naturally, the duo is desperate to join their sovereign.  While Tigra and Shetara are willing to shelter the cubs, Lion-O refuses, insisting that babysitting must take a back seat to the mission.  Of course, the cubs follow the cats despite Lion-O’s objections.   I’m pretty surprised with the range of emotions that are coming off Lion-O in this episode.  Overnight the young prince has replaced his compassion with a sense of pragmatism befitting an absolute monarch.

Exhausted, low on supplies and having lost the lizards’ trail, the Thundercats arrive at the shore of the Sand Sea.  Once again, Shetara and Tigra recommend giving up the chase and focusing on the Book of Omens.  Lion-O insists that they press on, despite obvious fatigue and oncoming starvation.  Soon after, the cats discover a bounty of food sitting suspiciously atop the Sand Sea. In a fashion befitting Han, Luke and Chewie on Endor, the cats’ meal is interrupted and they are snared aboard the airship of Captain Cornelius Tuna.  Seriously, does everybody on Third Earth have post-industrial technology except the Thundercats?  How the hell did the Thundercat empire last as long as it did when even pirates have energy weapons?  It would be like the Romans trying to maintain their empire in contemporary Europe.  Swords and bravado don’t count for much when the Germans have cruise missiles and tanks.  I know, probably best not to ask such questions.

Moving on.  Tuna and his crew of bipedal Fishmen plan to make a meal of the Thundercats until the Ramlak attacks Tuna’s ship.  The Ramlak for all intents and purposes is the white whale Moby Dick.  This monster, that looks like a cross between a squid and a punk rock Ficus tree, consumed the oasis that Tuna and his crew called home as well as turning Tuna into a bitter old peg-leg bent on revenge.  During this encounter with the Ramlak, the Thundercats prove their worth in battle and are adopted into the crew.  Therein, Lion-O finds a new father figure in Captain Tuna.  I know, Captain Tuna sounds like a discount seafood brand but bear with me, the character isn’t as awful as his name.

Oh and while all this is happening, one of the Fishmen is trying to fatten up the cubs so he can eat them, despite the captain’s orders otherwise.  The cubs are oblivious to his ill intent and foil him without trying.  Fortunately this scene only lasts for about a minute.

Like Lion-O, Captain Ahab Tuna is driven by revenge.  Despite the singular nature of his quest, he manages to teach Lion-O a thing or two about being a leader: namely that everything a leader does must be for his crew, despite the fact that the crew will never appreciate the leader for his efforts.  A surprisingly realpolitik summary of the burden of command.  Tuna forgets this lesson when the Ramlak strikes again.  With his ship split in half and most of his crew overboard, Tuna is unwilling to give up the fight.  Lion-O refuses to leave the crew to a sandy grave, instead reminding the captain of his lesson: leaders have a duty to their crew.  Alone, the captain takes up his harpoon gun and utters the immortal phrase, “For hate’s sake I spit my last breath at thee”.  Battered, the Ramlak retreats from battle dragging the captain along with him.

Now aware that a quest for revenge leads only to death, Lion-O tends to the crew that Tuna was willing to abandon.  Just when all seems well, the Ramlak returns for a dessert of Lion-O a la mode.  Sea monster or no, the Ramlak is more plant than whale.  Lion-O and the Sword of Omens have little difficulty pruning a gaping hole through the beast.  In addition to killing the Ramlak, this action also spills the water from the Fishmen’s oasis, restoring their home to its previous glory.

With Tuna and the Ramlak dead, Lion-O sets aside his anger and orders that the Thundercats seek out the Book of Omens.

The episode’s final scene takes place within the pinnacle of Mumm-Ra’s pyramid.  Therein we find out that Jaga survived the battle at Thundara.  He has spent the intervening time being tortured by Mumm-Ra, who also wants to know the location of the Book of Omens.  Recognizing that Jaga will never willingly submit the book’s location, Mumm-Ra encases the old cat’s spirit within a cursed lantern that will point will point the way to the fabled tome’s resting place.

For twenty-two minutes of animation, it was not a bad piece of storytelling.  Shetara and Tigra felt a little too much like scowling scenery as Lion-O went about his mad quest.  However, he is their king, so, really, what else are they going to do but obey?  For my time, the thundercubs remain the most annoying part of the show.  When the central plot is a nod to Moby Dick, I suppose there has to be something that will appeal to the children watching the show.  Yet that doesn’t change the fact that their voice actors are dreadful.  Hopefully next week will see a bit more conflict between the lizards and the Thundercats, if only to get more of Clancy Brown’s voice in the show.  Also, when the hell is Panthro coming back?  Grune said he was dead, but I keep seeing promotional material featuring the wizened old soldier.  Thundercats without Panthro would be like Transformers without Ratchet or He-Man without Man at Arms.