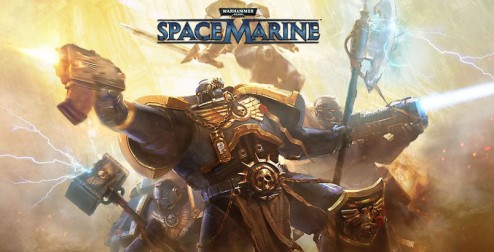 Summary Judgement: It looks, sounds, and feels like what I would expect from a Warhammer 40K third person shooter.

Review based on PC Demo

Though I never played Warhammer 40,000 as a table top game, mostly due to my tragic ineptitude with a paint brush, I’ve been eternally grateful for the steady supply of WH40K computer games that forgive my lackluster artistic talent. Beginning with Space Hulk, I think I’ve played every WH40K video game that has come along, including the mostly unremarkable Fire Warrior. While nothing will replace the joy that I felt at finally being able to command the Imperial Guard in the original Dawn of War, Space Marine by THQ and Relic Entertainment seems positioned to set a new gold standard for WH40K video games.

Like most entries into the WH40K universe, jumping in without prior knowledge of the game’s history is easy enough. The back story goes like this: under the rule of a psychic, prescient and immortal emperor, Humanity expanded across the universe where it met no end of evil aliens and demonic forces. Among these aliens are the Orks, which are just like the Orcs of high fantasy save for the fact that these ones have guns and space travel. As the central antagonists of Space Marine the Orks are out to loot the secrets of an Imperial Forge World. The only thing standing between this horde and their goals are the Adeptus Astartes, better known as the Imperial Space Marines.

The combat system within this demo is almost perfect. Switching between melee and ranged weapons is as easy as clicking the left mouse button to shoot and the right to brawl. This natural back and forth is absolutely necessary as Space Marine pulls no punches with its brutality. I think I was five minutes into the first of the demo’s two missions before a gaggle of Orks overran my position and pummeled me to death. There’s nothing worse than dying to a chorus of Orks chanting, “Kill tha humies” with their cockney accents – yeah in the future, most things have English accents. Of course, I got my revenge during the demo’s second mission when I got to strap on an assault marine’s jet pack.

While I didn’t see any heavy weapons or terminator armour within the demo, there was an impressive array of bolters, grenade launchers and the trademark Space Marine chain sword. Ammunition drops are sparse enough to keep skirmishes suitably tense and thus encourage melee combat. It is worth noting, however, that I did have a bit of frustration with the grenade launcher.  For the life of me I could not figure out how to detonate the projectiles once loosed from the launcher. On more than one occasion I stuck an Ork with an explosive round, Halo style, only to have it detonate in my face after one of my battle brothers shot it. A small addendum to the explanation of the game’s controls would fix this problem.

Then there’s the health system. Space Marines recover health by stunning a foe and then “executing” him. These executions happen in slow motion and accentuate the guts and gore that would naturally occur when bisecting an alien with a sword that houses a monomolecular chainsaw. Though cool to watch, timing an execution so that it doesn’t leave a player vulnerable to abuse from other Orks is a bit of a challenge. At first, I didn’t care much for this system. However, within fifteen minutes I grew to appreciate the fact that without a means to slow the game down I defaulted into a berserker fury, killing everything in my sight until I died from it.

Space Marine also captures the scope that should come with a WH40K title. One of my biggest complaints about Dawn of War II was that the scale seemed askance. A squad of four tactical marines should laugh in the face of an equal number of Orks, not jump for cover and engage them as if they are equals. Similarly, the maps in DoW II never seemed as rich as the sprawling environments they were meant to be depicting. Space Marine addresses both of these concerns. Since the Orks never appear in less than double digit numbers, the Space Marines finally have license to be bad-ass walking weapons of mass destruction. What’s even more gratifying is that my mid-range PC (Intel Core 2 2.66 GHz, 2 gigs ram, Radeon 3870 512 vRam) experienced no frame-rate or performance degradation when twenty or thirty Orks appeared on screen at the same time.

Amid the carnage, I still noticed the attention to detail that went into creating the sprawling streets and cramped buildings of the Imperial Forge World. Colour pallettes are muted. Everything looks battle scarred and run down. Where previous WH40K games seemed content to slap a few double-headed eagles and other sundry Imperial iconography on generic locations, Space Marine has an aesthetic of over the top grandeur amid constant decay.

Impressive as Space Marine is as a one-hour demo, its success or failure is going to depend entirely on the story that it tells. Without a strong narrative, the giddy thrills that come with beating the ever-loving piss out of an Ork will quickly devolve into tedious button mashing. Though the demo offers a few hints at the overall plot arc, the details remain somewhat elusive beyond the Space Marine litany of “purge the xenos”. I also expect that multi-player co-op is going to be a big selling point for this game. However, Kotaku recently reported that co-op play wouldn’t be available at launch. Further to that, it seems that co-op play will only extend to a few stand alone missions rather than the game’s campaign. A disappointment to be sure but one I can live with if Space Marine offers a strong single player experience.

Overall Score: Based on what I saw, a solid +3.