Summary Judgement:  Finally, Thundercats gets to telling a story that matters.

Week five begins with the Thundercats searching for the Tower of Omens, the mythological resting place of the Book of Omens.  Just to change things up, I’m going to take the pro/con approach to this recap – which I know is a wee bit late.

Pro: With the quest to find the Tower of Omens stalled, Panthro takes the piss out of Lion-O as he fails to gain sight beyond sight from the Sword of Omens.

Pro: Shetara lays some guilt on Tigra for joining Panthro in the Lion-O bashing.

Huge Pro: An awesome flash back from Mumm-Ra offers back-story that isn’t obvious from the previous episodes.  Not only were the Thundercats once a space faring race – a fact in-line with the show’s original canon – but they were also Mumm-Ra’s hired muscle.  Moreover, the Thundercats stole the Eye of Thundara from another race at Mumm-Ra’s bidding.

Pro: Mumm-Ra jumps into his chin sarcophagus, which turns into a high octane dune buggy.  Time for the boss to take care of business on his own.

Pro: Shetara tells Lion-O to open his mind and “relax” so that he can master sight beyond sight.  I wager 300 Quatloos that Shetara is going to have an end-season brush with death after admitting her feelings to Lion-O.

Pro: Lion-O saying, “We weren’t kissing, I was just trying to get my sword to work.”  Everybody say it on the count of three, “That’s what she said!”

Con: Shetara’s subsequent info dump “The Book of Omens was hidden so that it might never be found.”  Why go to all the trouble of writing a book if you are just going to abandon it in a tower and let everybody who built said tower take the secret of its location to their graves?

Con: Tigra bitching and moaning. “We have to just get lucky and hope that we stumble on to it?”  I wouldn’t normally have a problem with Tigra being a naysayer except for the fact that Snarf stumbles upon the entrance to the Tower approximately eight and a half seconds later.

Pro: Before getting to the resting place of the Holy Grail tower, the cats must endure a series of ordeals that would haunt Indiana Jones’ nightmares.

Con: Once again Lion-O uses “whiskers” as a curse.  That’s like me saying “beard” as a swear.

Pro: The Thundercubs actually do something useful when they pick a lock that saves the cats from plummeting to their doom.

Pro: Only the penitent cat shall pass. 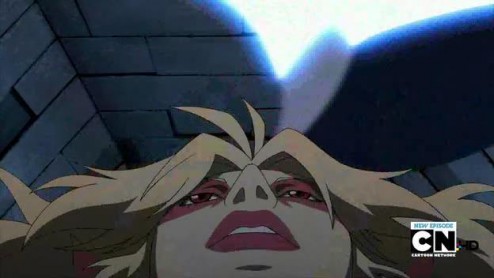 Con: Upon entering the next ordeal room, the Thundercubs screw things up and almost drown Panthro in the process.

Pro: The writers created some decent tension by threatening to kill off one of the core members of the team.

Pro: Panthro’s inability to swim leads to his saving the day, despite the cubs reverting to their past state of uselessness.

Con: The cats fourth challenge is by far the episode’s most blatant lift from Indiana Jones and The Last Crusade.

Pro: Lion-O finally figures out sight beyond sight after a little more hand holding from Shetara.  The Tower of Omens reveals itself and the cats pile on in.  While the cats are busy patting Lion-O on the back for his brilliant leadership skills, Mumm-Ra walks in and sets the stage for an epic battle.

Pro: Mumm-Ra calls Jaga, “Nothing but a vapour in a jar.”

Pro: Panthro kicks Mumm-Ra in the face before talking about himself in the third person.  “This old bag of bones is no match for Panthro.”

Pro: Mumm-Ra does the “Ancient spirits of evil” speech.  Upon transforming he shoots lasers out of his mouth and knocks Panthro into a wall.  Also a pro, bad-ass Mumm-Ra looks like something out of H.P. Lovecraft’s nightmares.  It’s now a race to see who will get to the pinnacle of the tower first and claim the book. 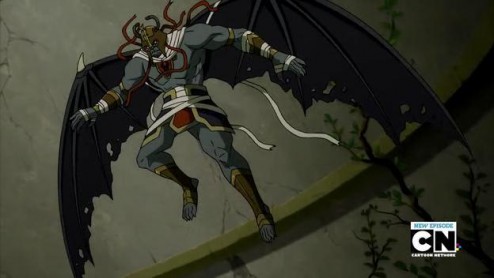 Pro: Mumm-Ra is not quite the wiener that I remember from the 80s.  He easily dispatches both Shetara and Lion-O during a battle at the top of the tower.  The old bag of bones also gets a great piece of dialogue.

Lion-O: What do you know of my father?

Con:  In a move that screams “Oh, no.  We wrote ourselves into a corner” Jaga, still inside the cursed lantern, makes like the Matrix of Leadership and lights the Thundercats’ darkest hour.  Jaga’s supernova act somehow drives Mumm-Ra away.

Pro: Shetara cradles the shattered ruins of the lantern.  Apparently, saving Lion-O came at the cost of Jaga’s soul – I suspect he will be back later in Obi-Wan Kenobi form.  Still, he’s dead for now so add one more corpse to the show’s impressive body count.

Pro: Lion-O opens the Hitchhikers’ Guide to the Galaxy Book of Omens to reveal…nothing.  There’s nothing written in the book.  Promise of things to come next week? I think so. 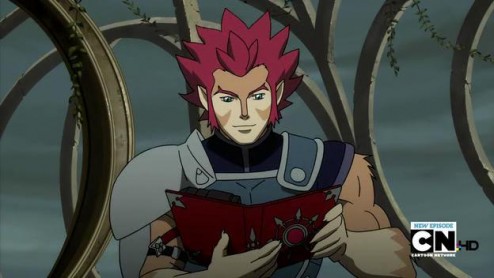 Overall this was a great episode.  After two back-to-back episodes that seemed to aimlessly unfold, this one had a real sense of purpose about it.   If I weren’t a week late writing this recap, I’d say that Thundercats has finally left me with a “can’t wait for next week” feeling.