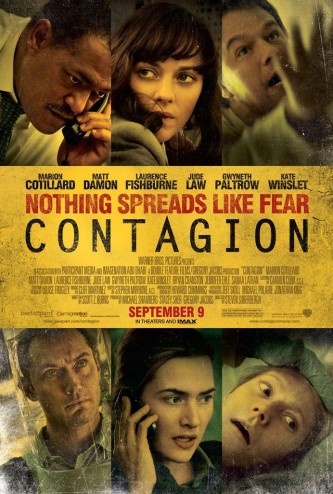 Summary Judgement: Contagion is not only smart enough to expect an intelligent audience, but it is potentially one of the smartest Hollywood Horror movies that I have ever seen.

Here’s the rub with Contagion: if you’re the kind of person who watches a movie expecting passive entertainment, then it is not for you.  And that’s okay.  Because contrary to Hollywood’s current zeitgeist, everything doesn’t have to appeal to everybody.  That said, Contagion is the sort of movie that puts a premium on pushing its audience well out of their comfort zone.  It dares its audience to think about the entirety of their world, and then revels in just how much it has disquieted their sense of security therein.

The premise behind the story is fairly self-evident from the trailers; there are no big twists, turns, or surprises that a reasonably intelligent person wouldn’t pick up on their own.  A virus for which we have no vaccinations kills Gwyneth Paltrow.  Thus begins the story of an epidemic and the world’s response to it.  Though primarily set in America, the story shifts between four plot threads that explore the virus through the lenses of a widower father and his daughter (Matt Damon and Anna Jacoby-Heron), an obscure blogger (Jude Law), the government/CDC (Laurence Fishburn, Kate Winslet, Bryan Cranston, Elliot Gould, Sanaa Lathan, Jennifer Ehle and Demetri Martin) and the Chinese government’s response team (Marion Cotillard, Chin Han).

For the sake of brevity, I’m going to concede that the acting, pacing, writing and camera work are all excellent.  With so many Oscar and Emmy winners/nominees in the cast there’s really no way to make an intelligent argument against the acting.  The camera work offers ample opportunity to examine the underlying story (if you’re into that sort of thing) through various shots that play with visual motifs of confinement, separation, isolation and the prevalence of artificial barriers.  I even found myself taken aback by the fact that the script dealt with the virus in a scientific manner.  My girlfriend, who studied useful sciences in university while I laughed my way through astronomy 100, assured me that the few scenes of science talk featuring molecular biology were not completely divorced from the reality of epidemiology.

Yet, assembling a thorough evaluation of Contagion requires diving headlong into the nature of its story.

Contagion drags its audience, kicking and screaming, on an exploration of disease hysteria, anxieties orbiting “big pharma”, distrust of the relationship between government and science, and the more recent argument between conventional medicine and homeopathy.  In doing so it forces the audience to recognize the fragility of the world in which we live.  Almost overnight the world of Contagion, our world, breaks down as bus drivers, firemen, police officers and nurses all stay home from work for fear of the virus.  Civil society collapses without the benefit of familiar tropes such as post-peak oil frenzy, space invaders, or zombies.  All of those avenues for disaster require some suspension of disbelief thus generating a level of cognitive dissonance; wherein, the audience can disassociate itself from the world portrayed on screen.  By grounding itself in reality, Contagion offers no such escape hatch.

The other noteworthy issue within the movie is its recognition that a virus isn’t the only thing that is viral during an outbreak.  I refer, of course, to the flow of information.  History is littered with examples of epidemics where knowledge about the virus/curse from on high (how to treat it, how to avoid it, where it comes from) becomes an in-demand commodity second only to alleged palliatives and cures. Recent events have demonstrated the ability for social media to communicate ideas through revolutions and political upheavals. In such situations twitter and the like are generally seen as a productive and enabling force.  We are yet to see an example of how our heightened information age will deal with a genuine pandemic on the order of Spanish Flu.  Would social media help to keep people aware of safety protocols, or would it go off the rails in facilitating widespread fear and panic?

Bearing that in mind, I turn to the question of genre.  I do so not to pigeonhole the movie, but as a means of exploring it through an unconventional filter.  According to IMDB, Contagion is a “Drama/Sci-Fi/Thriller”.  I would also venture so far as to say that it is a Horror movie.  Aurora Award nominated author Matt Moore once told me that Horror is a reflective genre.  That is, Horror challenges those who engage with it to explore why they find certain images and words disturbing.

Consider as well the words of Horror Writers Assocation co-founder Robert McCammon, “Horror fiction upsets apple carts, burns old buildings, and stampedes the horses; it questions and yearns for answers, and it takes nothing for granted. It’s not safe, and it probably rots your teeth, too.”  Both sets of ideas resonated with me when my girlfriend asked if there is a market for a movie that so closely mirrors the world’s recent experiences with Swine Flu and Avian Flu.

Contagion is the sort of movie that leaves its audience asking, “What would you do?  How would you react?” when an issue evicts us from the familiar and throws us into a world where the planet has turned against us in the most natural way possible. Our fears and discomforts toward the subject are amplified by the fact that it strikes not within the realm of possibility but as an inevitability.  Since the core question to epidemiology is not “could it happen?” but rather “how bad will it be when it happens?” there is an unmistakable instinct to dismiss the premise, and thus the movie as a whole, for a safer vision of reality.  I may not be an expert on Horror, but if a story has the capacity to make people bury their head in the sand then it must be doing something to “upset the apple cart.”.  I dare say there is indeed a strong market for writing that can alienate without being either offensive or grotesque.

Within a mainstream movie market that, by and large, adheres to Jack Donaghy’s vision of “the good movie” – that is a movie that makes money before even starting production – Contagion dares to look behind the wizard’s curtain.  In doing so, the movie reminds its audience that for all their luxury condos, imported cars and identity theft countermeasures, they are not safe.  If that’s not a horrifying idea, I don’t know what is.