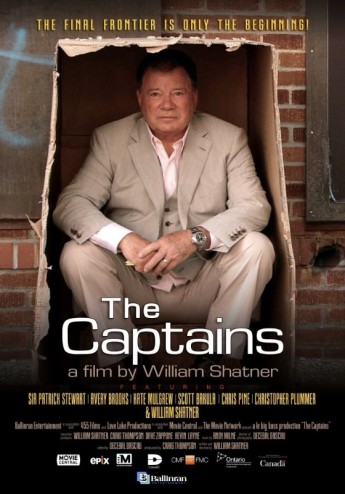 Summary Judgement:  William Shatner’s feature length documentary offers an unexpected and heartfelt window into the lives of the actors who have portrayed Starfleet’s captains.

Produced and Directed by: William Shatner

Every time I see a new movie about Star Trek, rather than a new Star Trek movie, I get really antsy.  The problem is that behind the scenes docs about Star Trek usually end up as self-congratulatory love-ins from the cast and crew in question.  That isn’t to suggest that those people don’t deserve their accolades.  Rather, I think that the professional Trek community can be a bit too quick to pat itself on the back in light of the recent setbacks that the franchise has faced.

On the other side of the coin, I tend to shy away from any sort of large scale production that explores Trek fandom.  With very few exceptions, most fan focused documentaries make us look like self-delusional freaks rather than people who have embraced a mythology.  This reticence almost precluded my watching The Captains. I didn’t want to hear the usual actor prattle about how much fun they had, how Star Fleet uniforms ride up one’s ass, and other such familiar stomping grounds.  Nor did I want to watch William Shatner reducing the people who made him famous into the familiar clichés of dorks who wear burgundy and black pyjamas to jury duty.  The Captains, however, is neither of these things.  Indeed, if there was one thing I didn’t expect from this documentary, it was that it would be genuinely touching.

The doc sees Shatner having candid and extremely personal conversations with some of Starfleet’s finest, as well as Christopher Plummer.  While Star Trek is the thread that ties all these people together, the discussions are anything but genre focused.  In fact if I had to sum it up in a few words, I’d say that this documentary is more about the personal toll that working in genre television has taken on Shatner, Stewart, Brooks, Mulgrew, and Bakula.  Pine and Plummer serve to bookend things and offer up a few narratives that don’t end in divorce or children refusing to speak to their parents.  Save for Brooks’ marginally incomprehensible diatribes, to quote Shatner “Avery is a bit out there”, the entire thing is not only tasteful, but at times heart wrenching and the polar opposite of what I have heard these actors say in past interviews with the media proper.

Out of a desire to avoid spoilers, I’ll spare the specific details of the chats and speak more generally on Shatner as an interviewer.  I’ve never watched William Shatner’s Raw Nerve, but I’ve often witnessed Joel McHale eviscerate it on The Soup. Having watched The Captains, I can see why Shatner ends up as fodder for McHale’s snark.  There’s no other way to say it than Shatner is Shatneresque in his approach to interviewing.  He injects his own, seemingly incongruous, narratives into the discussions but uses them to cut through the fluff so often associated with celebrity speak.  It’s a clever disarming tool that put Patrick Stewart so at ease with Shatner that the former seemed on the verge of an emotional break when asked about his two failed marriages.  Aside from Barbara Walters, I can’t imagine many other people who would have the ardroit cojones to put Patrick Stewart in a place where asking about his emotional dysfunctions is a natural transition in the conversation.

Although the Shatner approach to discourse has its strengths, it’s also important to remember that he’s an old man and as such is subject to asking old man questions.  One segment of his chat with Kate Mulgrew was particularly disappointing.  Although the discussion eventually transitioned into a poignant look at the challenges of being a single mother working in L.A. – challenges that include having your children grow-up to resent you and the work you did for seven years – the opening movements of Shatner’s talk with Trek’s first female captain had all the sophistication of this:

Old man weirdness aside, it’s the honesty that runs through this documentary that really sets it apart from other Trek doc ephemera.  Most of the captains are at a point in their careers where they can be honest about their Trek experiences without fear of reprisals.  Stewart’s a knight so he can say whatever he wants whenever he wants without worrying about a PR disaster.  Brooks is a tenured professor at Rutgers.  Mulgrew is almost absent in television due to her career as a fixture in New York’s theatre scene.  Plummer is Plummer and as such fears no flak.  Only Pine, as the youngest of the captains, seemed to speak in terms of acceptable interview jargon.  Though I’ve heard no end of stories about actor meltdowns and the “pressures” of the job, this documentary is the first thing to succeed in creating an emotional connection between myself, as a cynical audience member/critical evaluator, and the actors as people struggling to convey their art.  At the same time, the discussion never devolves to a pity party.  It’s simply an honest look into the places fans aren’t supposed to see.  That honesty can be a little uncomfortable, but it also serves to make the actors seem like actual people – except for Avery Brooks who I’m now convinced is a wormhole alien from DS9.

The documentary ends with a disquieting retrospective from Shatner.  There’s not a drop of irony or acting when he admits that making this documentary has put him at ease with the fact that he will largely be remembered as James Tiberius Kirk.  The levity and odd bit of physical comedy that Shatner employed during the documentary is utterly absent as he walks the grounds at Ontario’s Stratford Theatre, speaking in such a way as to almost eulogize himself.  “Go ahead and beam me up Scotty, but just not quite yet.”  The words are equal parts inspirational and haunting when coming from a man who is so often ridiculed in popular culture for being a stereotype of himself.

The Captains appeal should extend beyond Star Trek fans to anybody interested hearing actors speak about their lives without a network or studio executive coaching them from off camera.  Though emotional, it is far from maudlin.  Furthermore, it offers a layer of depth into the lives of Star Trek actors, especially Stewart and Shatner, that even this die hard Trek fan found surprising.  If ever there was a Trek documentary to watch, this is the one.