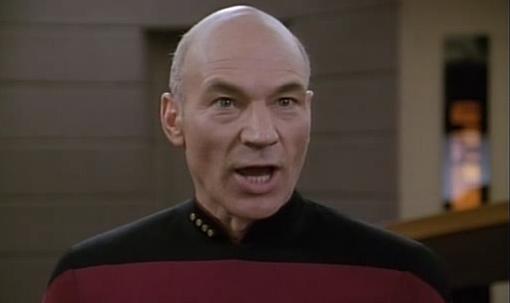 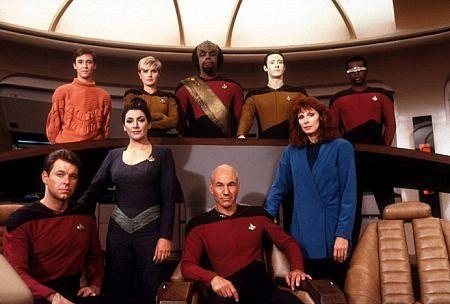 The Short Version: Based on my current methods of evaluating television, I think I would have written off Star Trek: TNG as a bad idea.

The Long Version: Of everything that I review, genre television can be the most problematic.  It’s not that it is particularly difficult.  Nor is it particularly time consuming.  In fact, as labour intensive projects go, book reviews and podcasts take up the most time and appeal to the smallest subset of my audience. The issue with television is gauging just how much of a show to watch before putting pen to paper.

There’s an obvious temptation to write in the aftermath of a series’ pilot episode.  For a small website like mine, writing in the immediacy of a premiere places my words right at the forefront of the blogosphere.  Granted it’s impossible for me to compete with the big boys, but even the trickledown represents a noticeable volume of traffic.

From a purely critical perspective, it’s best to wait for an entire season to conclude before writing something.  A restaurant reviewer doesn’t write a review based solely upon the starters so why should a television critic do anything different?  The downside is that by the time the season is done, so many things have already been said that it is challenging to come up with something new to offer.  Not to mention the fact that in delaying an evaluation I lose the “I need somebody to tell me if I should watch this” demographic.

To that end, I came up with the “three episode rule”.  A new series gets three episodes to prove its chops before I put pen to paper.  No system, however, is perfect.  Consider my review of Spartacus: Blood and Sand. It got the customary three episodes and I wrote it off as fetish realization in togas.  I’m not sure what primitive part of my psyche kept me watching Spartacus, perhaps the part that moves me to watch True Blood if only so I can rag on its abject stupidity.  Fortunately my desire for titillation carried me to the point where Spartacus got better.  Before I knew it, I was writing a mea culpa review.

After watching two out of three obligatory episodes of Terra Nova, I find myself examining the three episode rule.  In the case of TN, I don’t fear that writing this show off will prove to be a mistake.  It might not be frame for frame plagiarism of Outcasts, but it’s pretty damn close.  More on that next week though.

Still, the utter shite that is Terra Nova got me thinking about how a “successful” genre series would stand up to my critical approach.  That’s when I realized that I probably would have written off Star Trek: The Next Generation as a great idea gone horribly wrong.

Consider the summary judgments of the first four TNG stories.

Ep 1&2 “Encounter at Farpoint”:  Encounter at Farpoint introduced the eighties to a new Enterprise with a new crew and a very familiar villain.  Being the cynical prick that I am, I would have looked at Q (John de Lancie) and probably said something snarky like, “Hey is this Trelane’s older uncle?”  Granted, Q turned out to be a fantastic character, if only for introducing the Federation to the Borg, but that didn’t happen until season 2.  Otherwise all we get from this episode is that Geordi is blind, Data can’t whistle, Troi and Riker used to have a thing, Troi looks good in a miniskirt and Picard is both French, despite an English accent, and a bit of a grouch.  The only genuinely interesting thing to come of this episode is the courtroom of the post-atomic horror.  Too bad the late twenty-first century never really comes up again within televised Trek.

Ep 3 “The Naked Now”:  Hey look everybody, it’s that episode of Star Trek TOS where everybody acts like they are drunk; now featuring damaged blondes having sex with androids.  Also, those of you conscious of things race related will notice that a certain sword fighting Dumas quoting Asian character has been replaced by a drooling moron who likes to play “toss the isolinear chips”.  Great work with the race relations there writers John D. F. Black  and J. Michael Bingham.

Ep 4 “Code of Honour”:  A planet of black people use Thunderdome to settle disputes in their multi-partner marriages.  Christ and Hunter, do I have to draw a picture on why this episode blows goats?  So much for Star Trek as a morality play.

Of course TNG had the benefit of the Trek franchise backing it, and that isn’t something that is easily dismissed.  Though it would take a particularly die hard TNG fan to defend these episodes, indeed TNG’s first season, as a high watermark of genre writing.  More to the point, my current practice of evaluating television would have seen Star Trek TNG tossed in the same bin that I plan on putting Terra Nova. In retrospect, season two of TNG and subsequent episodes in future seasons more than made up for the questionable writing and recycled plots of the show’s first season.  Say it all together now, “There are four lights.”

Thus we return to the point at hand.  Genre television is an oddly biological medium.   Sometimes things that seem destined for extinction undergo a spontaneous mutation, becoming something new and exciting.  In other instances, things that ought to be titans among the genre, gifted with every conceivable tool for success, stumble.  By the time they recover their footing, they find themselves surrounded by an army of smaller predators.  They die not with a roar, but to the whimper and online outrage of the fans.