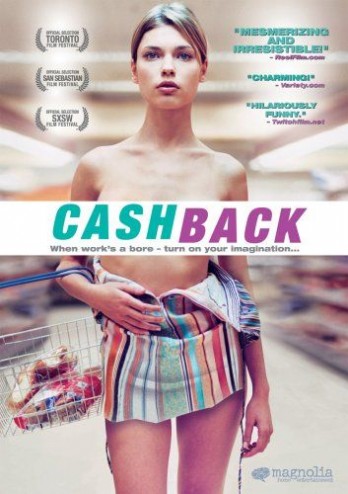 Written and Directed by: Sean Ellis

Cashback is a movie that I likely never would have watched were it not for NetFlix’s horrible recommendation algorithm classifying it as science fiction. It’s not.  In fact, Cashback is about as far from sci-fi as a movie can get. In one moment it’s an angst addled university melodrama. Wait a few minutes and it turns into a retrospective on the central character’s sexual awakening. Later, it’s a Marxist screed against the banality of the service sector. Peppered throughout these various themes is a question that explores the relationship between artist and subject.  Oh and it’s also a bit of a comedy as well.  What’s that old maxim about attempting to appeal to everybody?

For its efforts, Cashback, and the short film upon which this feature is based, collected no shortage of awards and critical acclaim. It’s also managed to score an equally impressive number of negative reviews. I’ve put nearly two weeks worth of thought into this review. I’ve tried to explore it from every angle, going so far as to even call upon a colleague in the art community for his thoughts. I recognize that some might call me a philistine for daring to dismiss what is ostensibly an indie art film, but Cashback is a bad movie.

The premise is common at best, cliché at worst.  Ben Willis (Sean Biggerstaff) is an impoverished student at an art college. Therein his girlfriend Suzy (Michelle Ryan) breaks up with him. Slow motion camera work paired with opera in the background of the scene that witnesses this breakup gave me hope that the movie would rise above a vision of angst and whining that I foresaw in a flash of prescience; it never did. The kind of maudlin drama that goes with being twenty-one years old accompanies everything that happens in this story. To the movie’s credit, it’s perfect in its portrayal of overwrought university romances. Unfortunately, I lived through enough of those relationships when I was a student , and I don’t care to spend my free time watching them now in cinematic form. However, I suppose that anybody whose lifeclock hasn’t gone black might look at Ben’s plight and go, “That’s so me.”

What counts for the main plot sees Ben getting a job, meeting a new girl, potentially losing that new girl, but keeping her in the end. Snore.

It’s the tangents that Cashback takes to get to the end that merit discussion. As a result of his breakup with Suzy, Ben develops a case of insomnia. Using his newfound extra time he addresses the perpetual problem of student poverty and gets a job working at a grocery store. This is when the movie flirts with Marxism before retreating back into the comfortable bosom of pratfalls and angst. The take away message is that working in the service sector isn’t “work” per se, it’s an exchange of personal time for a pittance of money.  The setup is there to probe deeper into this relationship, but it never happens as the movie needs to spend about twenty minutes making Ben not look like a pervert.

You see, as a means of coping with workplace boredom, Ben discovers that he can (maybe) freeze time. The actual nature of Ben’s “power” is the conceptual question mark of the movie.  Is Ben actually freezing time or is he just an artist who’s gone a bit off his nut?  It’s an interesting enough question. Too bad the movie wastes yet another piece of its potential in making the answer to this question a null value. How does that happen?  In his (maybe) time frozen world, Ben takes to posing and sometimes stripping the women who come into the store for the purpose of drawing them. This fixation with the female form is justified through the aforementioned twenty minute long jaunt through Ben’s sexual awakening.  Distilled down to its component parts that metamorphosis goes like this: eight year old Ben likes boobies. Twelve year old Ben sees a Hustler magazine and thinks it’s a little icky. Twenty year old Ben gets pretentious about the beauty of the female form.

Though the nudity is at all times tasteful, Ben views the frozen women with all the respect an artist gives over to his subject, the premise is just a little too questionable for me. The movie itself is what set me on this line of thought.  In the third or fourth scene, Ben is in class where a very flatulent fat man is posing nude for the group.  Ben, however, is sketching his ex from across the room. The professor then informs Ben that Mr. Naked Man has given his time to the group.

That’s what put me off the most with this movie.  None of the people in Ben’s frozen world are giving themselves up to be subjects.  Ben is just taking advantage of their vulnerability while “frozen”.  Even though he is creating works of art, it still seems like a morally questionable act, perhaps even treading into the realm of a violation.  Granted he’s not raping these women, but there’s still a question of agency at hand.  I’ll admit that I found myself a bit out of my depth on this issue so I put the question to real world artist Timothy Clinton.  Is it kosher for artists to capture a subject without said subject’s consent?  Tim answered with, “No, not so much.”

I suppose there might be some who argue that the intrinsic value of good art trumps considerations of individual agency, or more plainly that the ends justify the means.  However, I’m not sure we can look at art, or an art movie, and call it successful if the driving force behind said creation is morally dubious, to say the least.  Combine that ambiguity with no shortage of teenage angst, a weak main plot, pacing that pushes a viewer’s attention to the point of breaking and it’s hard not to look at Cashback as anything other than a trite piece of fetish realization.

For my time, Cashback, is a study in wasted potential. If Cashback curtailed the endless dick and fart jokes and instead engaged with the questions it implicitly asks about artists and their subjects, then it might have been a more naturally thoughtful piece. Instead it revels in its sophomoric ways and sees the protagonist fêted for his achievements. Despite opening the door to thoughtful inquiry, Cashback answers its own question with all the simplicity of an eight year old that refuses to justify their position beyond selfish gratification.

-1.5 for essentially celebrating what I see as a violation of individual agency

-1.0 for shallow engagement with interesting issues

-1.0 for excessive angst and melodrama