Ever since NBC announced that it was benching its critically acclaimed but low rated sitcom, Community, various “Save Community” groups have popped up on the internet. I’ve signed three online petitions to date.  Within the extensive critical praise there’s one word that critics and fans keep repeating over and over again: meta.  It’s a word not often heard within discussions of sitcoms.  However, if a person were to fill a room with Community fans, there would be no escaping a discussion on how Dan Harmon revels in going meta.  The question then becomes, what does it mean to go meta?  And more importantly, why is it a strength for the show?

Is it being applied as a prefix to the word fiction? Certainly Community could be measured under William H. Gass’ definition of metafiction as found in his essay “Philosophy and the Form of Fiction”.  It’s regular shtick to see characters in Community, usually aspiring director Abed or even the show itself, making references to other works of fiction and the devices that they use to tell their stories, as seen in the clip below.

More specifically, Community revels in reminding its audience that they are interacting with a fictional environment.  In season three’s Hugo Award worthy episode, “Remedial Chaos Theory”, a roll of a die turns into a voyage through the multiverse.  This variation on conventional script writing allows seven different narratives to emerge within one twenty-two minute plot.  In watching this episode the audience engages not only with Abed’s recognition of his own potential parallel existence, but with the tenuous nature of their own reality.  Is life, like in the episode, one outcome among millions?  Claims to fictional self-seriousness are impossible within such a unique environment for storytelling.  The effect is almost Brechtian in its ability to take the audience from their comfortable expectations and expose them to something unsettling through unconventional means.

Other interpretations of Community can blend together meta as a prefix and meta as an adjective wherein something’s meta qualities are seen in its self-referential nature.  In that sense, Community is often television on television, a production on production.  The comedic pay off therein is not simply a look at life on the other side of the camera lens, but in Community’s tendency to turn its attention to meta-acting: an actor, playing a character who has to play a second character while remaining tethered to the expectations of the first character.  Stand out examples of this trend include Danny Pudi as Abed as Christian Bale as Batman, or Joel McHale as Jeff Winger as Dean Pelton.  Though my favourite instance of this blends the production on production motif with meta-acting.

It’s obvious that writing which allows for intertextual discussions might not appeal to all.  However, the show couches its meta repertoire in countless pop culture references, as seen in the Breakfast Club sequence in the previous clip, as well as the “Pierce Factor”.  Chevy Chase as Pierce Hawthorne brings more than just the odd dick and fart joke to the screen.  The carefree privilege of his character opens the door to humour that takes aim at racial intolerance, hyper-wealth, gender and sexuality.  It’s comedic in the classic Greek form where the divisive issues of the day are subject to farce thus allowing reason to prevail.

To recap, the show is relevant without becoming preachy, clever yet humble, and somehow manages to resonate with the audience no matter what they bring to the table.  This is no small feat.  Therefore, in the finest fashion of Star Trek, Jericho and countless other series that were threatened with cancellation, I propose fans of Community inundate NBC with evil felt beards as seen in the end of “Advanced Chaos Theory”.  If sacks of peanuts could buy Jericho one last season then perhaps evil Spock can get Troy and Abed their six seasons and a movie. 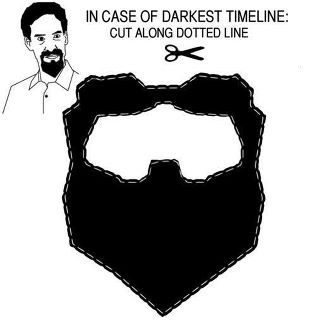