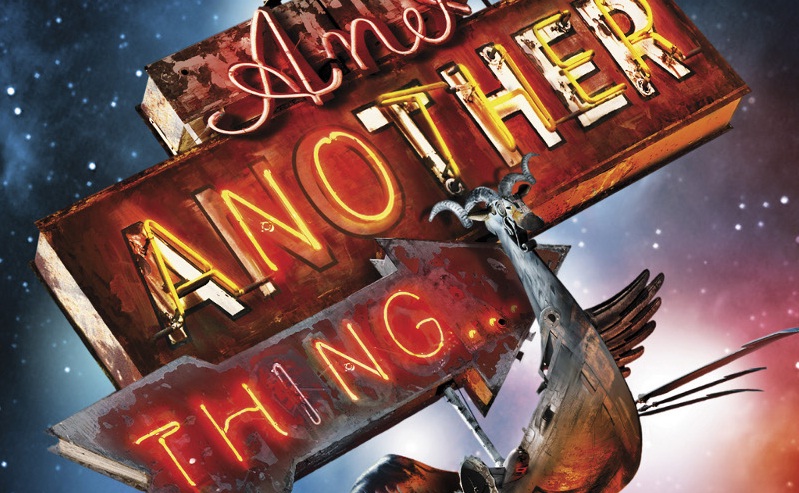 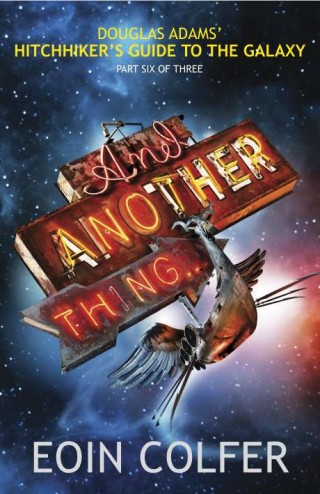 Summary Judgement: Sometimes we need to let intellectual properties rest in peace with their creators.

“ The storm had now definitely abated, and what thunder there was now grumbled over more distant hills, like a man saying “AND ANOTHER THING” twenty minutes after admitting he’s lost the argument.”  – Douglas Adams

It is so apropos to find the above quote on the back jacket of And Another Thing. In a way, I found Eoin Colfer’s extension of the late Adams’ franchise the very antithesis of what the series strives for. I’m not saying Colfer is a terrible writer; I’m saying he is out of his league. I did get a couple of chuckles from this Hitchhiker’s sequal.  But with a universe as rich as the one that Adams’ created, I’m surprised that the author would opt for a direct continuation from the last book without really introducing any new material.

The writing style of the original Guide is somewhat intact, but in a way that makes the text feel formulaic. Earth blows up, again. Zaphod does some stupid stuff that is followed by more stupid stuff. Improbability saves the day in more improbable ways. Anything that Adams wrote as a punchline is pulled to the forefront and explored in boring detail. No chapter seems to go by without a reference to Eccentrica Gallumbits, Gargle Blasters, Pormwrangling or Zarking exclamations; all of which were memorable in the first five books because they were mentioned in passing. Now, almost every guide note feels pretentious and is followed by further readings that dislodge the text from the pace of whatever is going on.

The whole of And Another Thing reads like a self-indulgent one-upance to the entire Hitchhiker’s Guide series. Take the Pan Galactic Gargle Blaster; the universe now has a better drink: The Dragon Slammer. If you found Ford’s original entry in the guide about Earth amusing, rely on him to now make an even more concise entry on another topic. Did you like how Adams’ poked at Asgard? Then let’s take a trip there and somehow weave Thor into the story for some reason. Oh, and another thing… Vogons are still utter bastards! Well, with a small exception.

All of the characters have been used with extreme creative liberties and thus they feel unfamiliar. Ford has become an extension of Zaphod, while Zaphod and Arthur have adopted some of Marvin’s traits, leaving the android completely out of the story. Trillian’s character comes full circle and ends where she began in Hitchhiker due to impulses that wouldn’t become a “brilliant astrophysicist”. I guess Random is still a maudlin teen, but we were just getting to know her anyway. The human colonists in this story feel like a reinvention of the Golgafrincham plot. On the other hand, that may be the best thing going for And Another Thing, creatively.

Douglas Adam’s previous tales tried to take reason and turn it on its head in an effort to look at our society and the absurdity therein. He left bread crumbs in our imagination which then sank into our collective unconscious. The only intentions I can detect from Eoin Colfer is a tendency to roll as many cheesy puns as possible into the novel. We don’t come to any epiphany about the universe or ourselves, and 42 no longer stalks the back of our minds. Gone is the subtext of Douglas Adams’ storytelling. Lost is the notion that the greatest stories are about imagination,  hopes for the future, or observations about the absurdity of everyday life. Where Adams coaxed his audience into a little introspection, Colfer defaults to pandering to the banality of our base emotions.

I’ll admit to being harsh on this work, but as much as we all want more of what we like sometimes we need to let intellectual properties rest in peace with their creators.  This is also applies to certain other writers who have been taking severe liberties with one of my favourite series for the last decade. Oh, and another thing…

Reasons to read And Another Thing

+0.5 if you were Jonesing for more Hitchhiker’s

+1 for Thor being awesome and conflicted outside the Marvel Universe.

+1 for a couple of genuine chuckles

Reasons to leave your babel fish in it’s bowl:

-1 for getting the characters all wrong

-2 for overusing Gargle Blasters and Eccentrica Gallumbits among other things

-0.5 for being an unnecessary addition to a great series