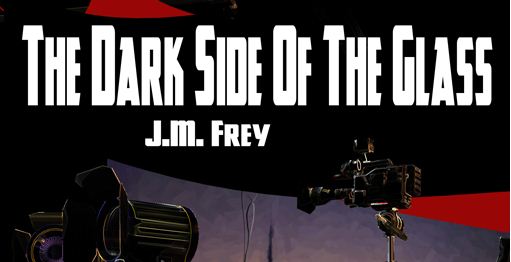 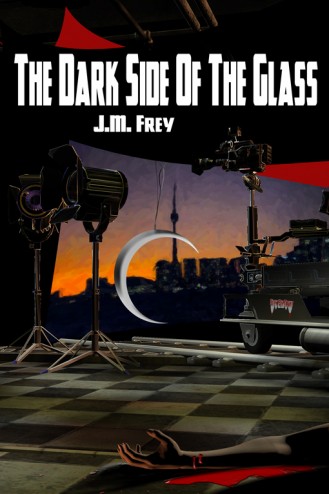 In a Page of Reviews exclusive, Canadian sci-fi author J.M. Frey took some time to talk to me about her upcoming novel The Dark Side of the Glass. Frey’s previous novel, Triptych, has gathered no end of critical acclaim as a poignant study of sociology and sexuality that simultaneously turns the “alien invasion” sub genre on its ear. Her latest entry, due to be released in June of this year from Double Dragon Publishing, offers a satirical but loving look at vampire-detective drama, fan culture, and the Toronto film industry at large.

I asked J.M. if there was anything particular to her experience as a member and scholar of fan communities that went into the production of this novel. Here’s what she had to say.

I wouldn’t have written the book at all had I not been a member of fan communities. This story comes from the deeply seated love that fans have for their chosen fandoms, and the way that love spills out as fancrafts – cosplay, art, games, fanfiction etc.  I share this love with them; I’ve been going to cons, participating in Cosplay masquerades, and writing fanfiction since I was a tween.

The story was originally written to accompany my Master’s Thesis, “Water Logged Mona Lisa: Who is Mary Sue and Why Do We Need Her?” on Mary Sues.

Click here for clarification on “Mary Sue”. J.M. is quoted in the  Criticism section of the entry.

In the thesis I discuss the importance of the much maligned Mary Sue character to the fanfiction community and how Mary Sues are an important element in the process of becoming a writer. I position Mary Sue as a fan’s first steps towards becoming a fancrafter – one always imagines oneself as participating in the world of the fandom which they admire. Taking tea with the Doctor, running around London on a case with Sherlock, stepping through the wormhole alongside McKay… these are the self-inclusive fantasies that fuel the creative drive of the fan. And that are, I posit, the first way in which people connect with their fandoms. “Oh, how I wish I could be there, going on that adventure with you!”

It’s a brilliant, magical impulse that is left over from childhood games of make believe. I love the “me too, oh, let me play too!” knee-jerk reaction that kids and fans and creative folk have. I love it even more when people succumb to the impulse and create and play with it.

And that is healthy. That is normal. That is, also, the impulse from which stem Mary Sues.

Now, Mary Sue has become a pejorative for any too-perfect character, and that was a hard stigma to shake in my thesis. I wanted to talk about Mary Sues as a positive step in the writing process, but there was so much negativity surrounding the term; it’s associated almost solely with poor writing and unrealistic characterization, of a new character who acts as the black hole of the story. I’ll admit that I’ve used it in its pejorative sense.

But I wanted to show how and why Mary Sues can and have made the fan community stronger and more self-aware, so I coined a new term for a sub-category of Mary Sues that, which being Mary Sues, are also good writing, intelligent discourse, and are self-aware creations by self-aware writers. I called these Meta Sues.

A Meta Sue is a Mary Sue character who knows that she’s a Mary Sue, and uses it to her advantage and/or a story/fanfiction in which the Mary Sue tropes are used by the writer as major plot point or a storytelling technique. I feel that Meta Sues are extremely useful in fancrafts. It allows the writers to address issues or problematics that the original media text can’t or doesn’t – for example, creating a homosexual Mary Sue in a media text with an otherwise solely heterosexual narrative forces room for the silenced voice of the queer fan.

When asked to provide an example of such a fanfiction for my thesis committee, I was at a loss to be able to do so. I was working within the realm of theory at that point and there were few Meta Sue stories that I could point to and say, “Yes, there’s one there.” I could find about four or five total. In a fit of creative problem-solving, I decided to write my own Meta Sue story, to see if what I was proposing could actually be done. In the end, along with a full MA Thesis, I ended up writing one original novel , a full multi-part epic fanfiction that I posted online and got quite a nice bit of feedback on, and this, “The Dark Side of the Glass”. The whole project, when I handed it in, was around 1500 pages in length.

Each story focussed on a different incarnation of Meta Sue. For this particular novella, I decided to delve into one of the most interesting aspects of fandom, to me – the love of the villain. I mean, who doesn’t love a great villain? Who doesn’t want to meet Loki, Moriarty, Seishirou or Sylar?  Who doesn’t praise their sexiness, insanity, charm, and appeal? Villains are favoured characters for a reason.

But would you ever, really, want to meet one?

Heck, no. They’d probably kill you on the spot for knowing too much about them.  Our greatest fantasies, as fans, are actually quite horrifying when you think about it – the PTSD, the abuse, the danger we would be exposing ourselves to is terrible. But, because it’s fantasy, we have fun with it. We indulge in it as fantasy, and that’s acceptable. It’s a little adventure for the Id.

So I ran with that idea – if a TV villain in real life would be horrific and terrifying, what about all the rest of the things that fans envision? Being in an epic magical battle, or being fed upon by a vampire, or suddenly having powers beyond the norm, or waking up on a spaceship in the middle of an epic battle; these things sound amazing, but when it actually, honestly happens, will it be amazing or would it drive you mad? Would it be an adventure or would your lack of actual experience and training get you killed?

At first the story was very dark. Mary, my main character, has terrible things happen to her when she becomes the girl-of-the-week, because that’s what happens to girls-of-the-week. There was no way, I realized, to give the story any sort of happy ending. And depressing stories are well… depressing. Nobody wants to read a story that is such a blatant exploration of a great fannish fantasy that ends badly for the hero, no matter how realistic it is.

So, I had to start again and make the story humorous. I wanted readers to understand what it would mean to really be a Mary Sue, but also to enjoy a sexy, fun romp.

The one thing I am a bit wibbly about in the final version of the story is the villainizing of the creators of the faux show. I wasn’t keen on doing it, because I don’t like it when fans get self-important and shouty at creators. It takes a hell of a lot to get a show on the air, and it’s a lot of work to guide a show. I should know.

Frey’s recent work includes the upcoming web series LESlieVILLE, due to launch in March of 2012.

And as the creator of the show, the writers of the show, even if they make choices fans don’t agree with, or mistakes, they are still making a show, they are still being creative and creating, which is much more than other people who chose to deride, write hate-posts about, flame and rant are doing.

But, in the end, you gotta have a bad guy, and I need Mary to have the ability to triumph over someone. So, pastiche of money-grubbing producers it was.

(To be fair, I have good friends among the money-grubbing producer set. Good folks, all, who are just as keen to help a creation onto the screen as the writers and actors).

I wanted a story that got my theory across without being a manifesto or a screaming lecture.  It doesn’t go as far into the issues as I’d like, but it opens up the readers mind to it while entertaining them, and in the end, I think that’s the best I can do for my readers. I like to make them think and wonder, but without leading them to the answers and spoon-feeding them. I treat my readers as the intelligent, thoughtful people they are.

I chose to take a more satirical approach to the story because I didn’t want the readers to think that I was being too self-important with the subject matter. I had a great suggestion from a friend to make the world inside the faux TV show I created for the story be just as flat and shallow in ‘real life’. This was a great device, because it was meta and really funny. I had a great time coming up with ways to make the world function in ‘real life’ and still resemble what we see on TV.

Because the story was a Mary Sue/Meta Sue tale, I of course had to name her Mary. It’s my wink to the readers in the know. And it had to be about my favourite genre – vampire stories. From there the idea grew into a vampire-detective story, because I love those so much. My first fandom was Forever Knight. And because I was working in film at the time, I decided that my main character had to work in film. I mean, I couldn’t have a Mary Sue named Mary who wasn’t at least partially actually my own Mary Sue.

Having Mary work in film was also useful, because it gave me a lot of story-telling shortcuts. It explained why Mary would have such intimate knowledge of the production; otherwise I would have had to make her really obsessive and unpleasant, and I didn’t want to give my readers a stereotype of the worst of fandom. I wanted Mary to be someone who could be celebrated – at first, a little too into her fandom, but ultimately generous and big-hearted and creative; a woman who grows as she becomes more sure of her own agency and power, uses the voice she had been silencing, and works to make what she loves better.

So, to actually answer the question you asked… all of it. All of my years in fandom, all of my time at the cons, all of my own fannish fantasies and loves, all of the conversations I’ve ever had with fellow fans, all of the incredible fancrafters whose talent and ambition I’ve had the priviledge to know and watched blossom, it’s all in there.

My thanks to J.M. for such a wonderfully thorough and thoughtful answer. Head over to JMFrey.net to find out more about her books and upcoming appearances. You can also listen to episodes 9 and 16 of the PoR Podcast to hear JM and I talking about Doctor Who and all manner of other nerdy things.