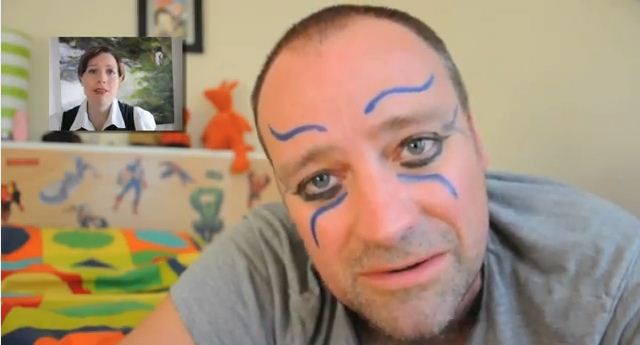 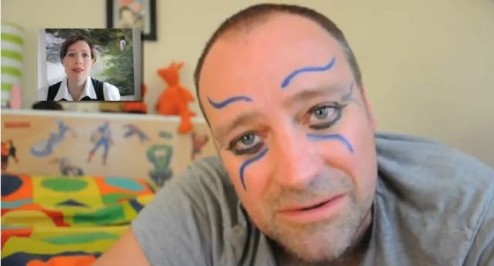 It seems like today is a big day for the siblings Hewlett.  David and Kate Hewlett, who played on-screen brother and sister Rodney McKay and Jeannie Miller in Stargate Atlantis, are pitching their co-created web series, Assassidate, to a third party. Hopefully everything goes well for them. Because after watching the first episode, I have to see what comes next.

David Hewlett plays Iain, a LARPing, MMORPGing, tech guru who inadvertently pushes his wife Pam into the arms of another man.  As if that weren’t humiliation enough, the very tool of Pam’s infidelity is Iain’s innovative dating web site, assassidate.com, which pairs people based on shared gaming habits. Now Iain stands to make a mint off his project only to potentially lose it all in an ugly divorce. Enter Kate Hewlett’s character Emily, the well adjusted and seemingly “normal” sister to Iain.  Emily’s solution to Iain’s conundrum is quite simple: forget about the fact that the duo’s childhood lemonade stand got Iain arrested for serving alcohol to minors and sign the company over to her control.

Though only three minutes long, this pilot episode abounds with potential for a winning series. The writing is sharp, timed to perfection, and absolutely charming to gamers and non-gamers alike. David Hewlett’s character is a vision of what happens when hard core nerds get older without necessarily growing up. Sufficed to say he’s a bit clueless while being intensely devoted to his passions. At the same time, there’s an almost innocence in his incredulity, perhaps because he’s wearing blue face paint and pulling it off, that Pam would use his website against him in a divorce. Kate Hewlett’s alter ego is framed as the consummate outsider to nerd culture. Yet her fast wit and easy snark suggests a person who at some point attempted to relate to her brother on his own plane, but inevitably became frustrated with the process. The result is a relationship that seems fully realized and rich with back story. As was the case on Stargate, the brilliant rapport between the two actors implies that on some level art is mirroring real life.

During various tweets, the Hewletts stated a goal of 20,000 views for today.  At the time of this post the count stood at 19,760. Why not invest three minutes of your life in comedy sans laugh track to put Assassidate over the top.