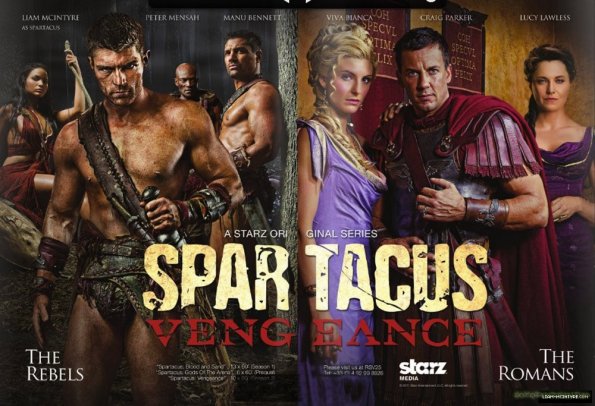 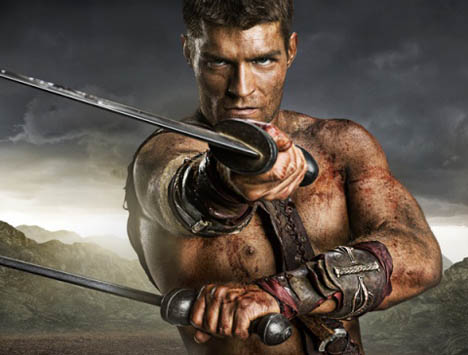 Summary Judgement: Though absent two of its leading men, Spartacus’ return washes away the horrible taste that Gods of the Arena left in our mouth.

Imagine if during the first season of Star Trek TNG the writers killed off Worf and Picard with plans to have Riker promoted to captain. Then just before the season finale airs Jonathan Frakes takes sick, quits the show, and dies a few months later. The network decrees that season two will go on with a little Dick York/Dick Sargent switch-up as the word of the day. As if the emotional trauma of losing a friend and colleague weren’t bad enough, the eighteen month layover from season one to season two saw some additional actor turnover among the secondary cast. Such is the situation confronted by Starz’s sleeper hit Spartacus: Vengeance. To the credit of the entire production, they’ve done a solid job holding everything together.

The story picks up three months after the events of Blood and Sand. Spartacus and Crixus’ uneasy alliance has led them to the temporary shelter of the sewers outside of Capua. From there they pillage the countryside for supplies and try to prevent the amalgam of escaped slaves from becoming a rabble. At the same time, a Capuan noble named Seppius has been dispatching mercenaries to hunt down the rouge slaves. Ineffective as they may be, his efforts have caught the attention of Rome. Claudius Glaber (Craig Parker), the general who condemned Spartacus and his wife into slavery and was extorted into granting patronage to the House of Batiatus has been elected to the office of Praetor (Think a chief justice and joint chief all in position). His glory seems short lived as forces within the Senate have tasked him to deal with Spartacus’ uprising, citing the bonds of patronage between himself and Bataitus. This affront to his position sees he and his wife Ilithyia (Viva Bianca) return to Capua.

There’s an incomplete feeling to Spartacus sans the late Andy Whitfield and the still living John Hannah. If there was any way to augur Whitfeild’s death, I suspect that executive producers Steven S. DeKnight and Sam Raimi would have seen Quintus Bataitus survive Spartacus’ initial uprising. Ever cursing the gods and invoking Jupiter’s cock, Hannah’s portrayal of an ambitious gladiator school proprietor served to forward the show’s intrigue and offer much needed comic relief. I expect the triumvirate of Galber, Seppius and Ilithyia will fill the void therein. For his part, Liam McIntyre, Whitfield’s successor as the titular character, did an adept job in assuming the mantle left for him. He can chew up the scenery with the best of his colleagues and does bear some positive similarities to the late Whitfeild in his demeanor and the way he executes the character. Beyond saying it requires only a little suspension of disbelief to see him, not Whitfield, as Spartacus, I’m inclined to give McIntyre a few episodes to settle into the role before leveling any real criticism in his direction.

Similarly, the remainder of the regular cast have picked up their roles without dropping a beat. Manu Bennett as Crixus and Peter Mensah as Doctore/Oenomaus both ground the show in the familiar. The former is reveling in his new found freedom but driven to find his lost love Navea who was sold from the Bataitus estate in the previous season. Oenomaus has taken to walking Capua’s streets desperate to find some way to restore the honour he believes he lost in betraying Bataitus. Lucy Lawless returns to her role as Lucretia, emerging from the blood stained ruins of Bataitus Villa as an amnesiac shell of her former self. I give it three episodes before she remembers everything and brings on the rage. Please bring on the rage. There’s nothing better than Lucy Lawless when she is pissed off.

Then there’s the violence and sex, hallmarks of Spartacus. At the expense of a few external shots that were so heavily green screened it was almost pathetic, the fight choreography in season two’s premiere episode is top notch. Yes, the blood effects can be a bit goofy at times, but the sword play is genius. Perhaps seeing a man impaled through the back of the neck is gratuitous, but what isn’t in this show? The episode’s raid on a brothel manages to do the impossible and combine sex and violence into one giant orgy of indulgence. Without treading into specific details, I think un-tempered is the best adjective to describe this scene; the brutality of the violence matches the abject, unapologetic, and not exclusively hetero-normative hedonism – which for the record makes everything from last season look positively vanilla. Arguably such a display is over the top. However, I think it to be the right move on behalf of the writers and producers since there’s no better way to reinforce to the audience that despite the changes this is still the same Spartacus.

So long as Spartacus: Vengeance doesn’t make the mistake of Spartacus: Gods of the Arena, that is getting into a pissing contest with itself to see just how far they can push the decadence from week to week, the season appears full of potential.