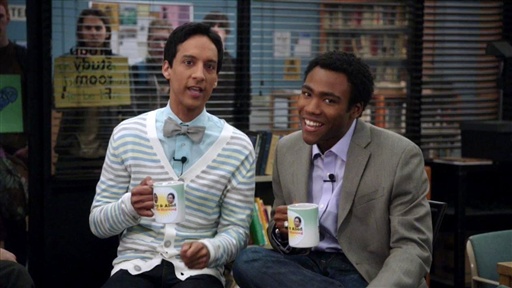 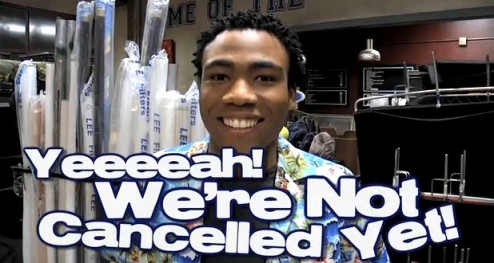 We did it! Dust off your three ring binders and fill your eco-friendly water bottle with long island ice tea because Community isn’t cancelled.  Say it with me now, “Six seasons and a movie.” I will also accept, “Troy and Abed in the morning,” as a triumphant exaltation. It’s not quite a “mission accomplished” moment, but at least we can stop holding our collective breath in preparation for a looming existential crisis vis-a-vis a world where Whitney endures and Community gets shit canned.

NBC’s president of entertainment, Bob Greenblatt, found himself facing questions on Greendale Community College and co’s fate at the Television Critics Association winter press tour.  Rather than making nebulous statements about benches, Greenblatt came out and confirmed that the show is not landing on the death list.  Quoting Greenblatt, “When I announced our midseason changes last fall and took Community off the schedule, I failed to explicitly say that it would be back…I want to expel any notion that it is just disappearing off the schedule.” The network has not yet announced when and where Community will return to NBC’s lineup.  Nor has anybody commented in detail on a fourth season for the show.

During an interview with the Huffington Post, series star Joel McHale discussed his thoughts on the show’s time slot and viewing demographic.  “Our fan base is mighty, thank God, and I think most of them are young, because no one appointment views the show, and I feel like, if they figure out a way to measure that and keep it all together, then our ratings might go up.” Here I thought NBC did track PVR/Hulu viewing into their ratings equation.  Either way, if watching the show when it’s actually on is going to keep it going, I’ll do my part.

In the meantime, Canadian fans who feel they need a little remedial primetime comedy can check out the entirety of season 1 on Netflix – PS to Netflix hurry up and get season two if only so people can watch the genius that is “Advanced Dungeons and Dragons.” In fact, now’s a great time to get friends who have heard of the show but never got into it invested in the series. As well, and I know I’m repeating myself here, Hugo Award nominations are now open.  Those with a ballot would do well to consider season three’s multiverse episode “Remedial Chaos Theory” for Best Dramatic Presentation – Short Form.  A membership to ChiCon 7, the 2012 World Science Fiction Convention, as of Janurary 31, 2012, will put you in a position to make a nomination for 2012’s Hugos.  Here’s a link with all the information.

Community’s been given a stay of execution; let’s all be streets ahead and get it off NBC’s death row.

Post a Reply to Stuff I Googled « Has “Community” Been Saved? cancel