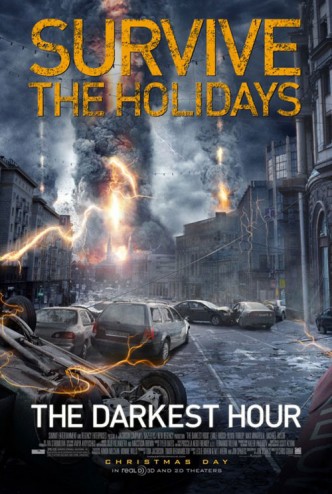 I don’t want to be that guy who dwells on the previous year, but there was no way I was letting The Darkest Hour pass without comment.

Perhaps it was the twelve year old single malt holiday cheer flowing through my blood stream, but the first commercial I saw for The Darkest Hour looked fascinating.  People running from aliens in Moscow; what sci-fi/horror/survival fan wouldn’t perk up at that pitch?  Two days later  I saw another trailer that had Emile Hirsch wearing what looked like a low rent Soviet Navy take on Ghostbuster’s positron glider.  That’s when I got suspicious.

Unless the central characters are those nerds from The Big Bang Theory, there’s no way that your average person is going to have the physics or engineering know how to build an DIY energy weapon.  Given that I couldn’t suspend my disbelief long enough to get through the trailer, I decided to see what some other critics had to say about this movie.  The results are not encouraging.  In fact, I think that The Darkest Hour is a dark horse candidate for worst sci-fi action movie of 2011, right up there with Battle LA or Skyline.

Jeannette Catsoulis asks in her New York Times review, “…how slovenly is it to use invisible aliens? If you’re going to tease us with nothing but pinwheels of light for three-quarters of the film, you’d better have one heck of a reveal up your sleeve. But if all you have is the equivalent of exploding garden gnomes, then your problems are greater than a disposable cast and a filming style as flat as the color palette.”

Catsoulis also points out that The Darkest Hour’s screen writer, Jon Spaiths, is credited as one of the two writers for Ridley Scott’s upcoming Prometheus. Live in fear, boys and girls.

Mark Olsen, in his review for the LA Times, takes aim at questionable direction and sub-par performances from the actors. “Director Chris Gorak previously made the effective, low-budget, horror-thriller Right at Your Door and in making this move to a splashy, bigger film his instincts for character have perhaps been overwhelmed by the demands of a larger production. Capable and compelling performers like Hirsch and Thirlby seem left to their own devices to make some connection with the material.”

Brown also poo poos The Darkest Hour for a shameless attempt to connect its alien invasion to the 9/11 attacks. “Even though the movie is set in Moscow, some will be disturbed by the way it evokes 9/11 with abandoned cars, drifting ash, and collapsing buildings. There are even towers of fire and smoke, although this time they’re shooting upward, as the aliens take our electricity or minerals or whatever.”

True to form, Nathan Rabin on The Onion’s AV Club offers the most scathing review, also picking up on the movie’s prop plagiarism.  “The Darkest Hour reeks of desperation even before the cast straps on what looks like homemade versions of Ghostbusters proton-packs and go out on the offensive against the bad guys. The Darkest Hour is a film utterly devoid of merit, a dreary sci-fi slog so tedious even its own actors seem bored. Who can blame them? They’re in a film that tries to make a variation on static cling terrifying.”

Amid the cutting reviews, I managed to find one critic who actually enjoyed the picture.  Josh Tyler over at Giant Freakin Robot said The Darkest Hour is, “a notch above every alien invasion movie released in the past two years, outside of Attack the Block.”

That’s not saying much considering the steaming pile of Rhino crap that is the last two years in sci-fi action.  His bottom line is that “…director Chris Gorak is good enough to keep his film entertaining, if not exactly engaging, throughout. The Darkest Hour is worth a look.”

I’m not usually one to ignore a movie because of its trailers or critical reviews, but in this case I think I’ll make an exception.  Thirty seconds of this movie was more than enough to convince me that it’s not worth my time or money.  Of course, if somebody wants to pay for my ticket I’ll gladly eviscerate or defend (high unlikely from the look of it) this movie.

NB: Tomorrow’s post will be the 200th post to the Page of Reviews.  Not quite sure what I’ll do for it, but I’m sure it will be something interesting.