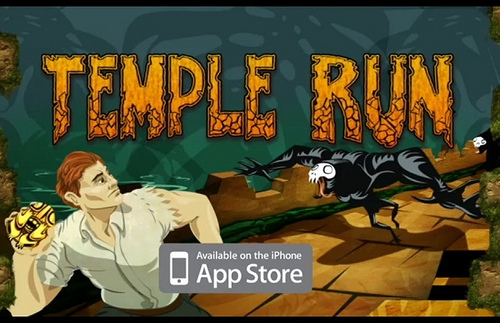 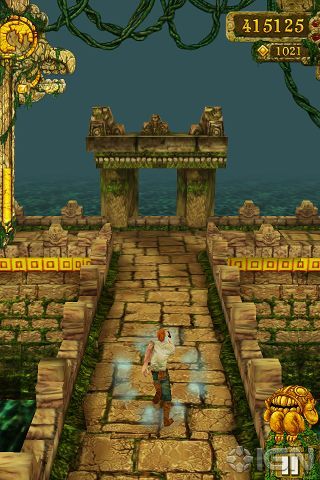 Summary Judgement: An overly simplistic game whose fun has a half life of about ninety seconds.

I’ve had a certain thought in my head for quite some time now. Actually, it was more like a feeling. It only became something tangible when I decided to try Imangi Studio’s Temple Run. To wit, in terms of game design I don’t see a lot of difference between Atari 2600 games and iPhone apps. There are, of course, some exceptions to this idea. But after spending a week playing Temple Run – usually as fodder for distraction during obnoxious commercials – I have to say that this game is as brainless and uninvolved as any low-rent third-party developed Atari game.

Let’s start with the basics. Temple Run is a game with no end or purpose beyond playing the game, over and over, to accumulate that most base thing: a high score. Within the game, a little man runs along a procedurally generated Aztec themed track. The gamer’s task is to keep him alive by jumping over or sliding under various obstacles. Players also have to turn and lean left or right from time to time. The decision is mostly meaningless as there are no fixed points within the game. Distracting players from this simplistic design is the classic coin collecting gimmick. If players collect x amount of coins they can unlock various power-ups which serve no purpose other than to offer the slightest motivation to keep playing. That’s it, that’s the game. You can’t win. You always die – either from being eaten by a bunch of anime inspired apes in perpetual pursuit of the temple runner, a collision with an obstacle, or failing to turn at the appropriate time and falling off the path.

When the pretty graphics, and make no mistake they are very pretty, are stripped away, there’s no tangible difference between Temple Run and Pac-Man. Well no differences other than the fact that Pac-Man was original and Temple Run is about as derivative as a title can get.

At least Imangi had the decency to keep Temple Run a “free” title. Players reticent to invest their time in product which so wonderfully simulates the dull repetition of unskilled assembly line labour can buy power ups through a built in micro transaction system. By my math it would take about $10 to fully max out a character’s “abilities”.

Call me a cranky old gamer, because I know that as a thirty year old I do probably fall into that category, but I remember being thirteen and thinking that it is a pedestrian thing when a game’s only motivation for playing is an arbitrary score. (This is not withstanding the glory and bragging rights that come with holding the top place on an arcade machine.) When I came across MegaMan 4, my introduction to the series, I found a title whose modus operandi was daring me to finish it. I thought to myself, “This is what a game should be.” Given the sheer processing power that modern smart phones posses when compared to Atari/NES/Famicom/Genesis, am I that out of line to expect something that is a little more nuanced than turn left, turn right, jump, die, repeat?

Save yourself some time and give Temple Run a pass. Should you decide to try the game, perhaps out of some morbid curiosity, I suspect you will only find it satisfying for the duration of a healthy bowel movement.