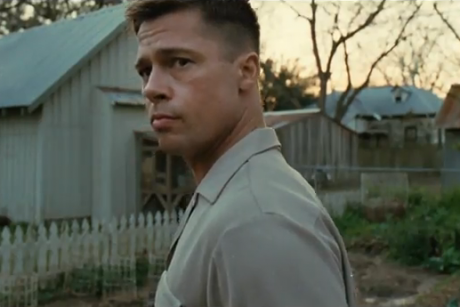 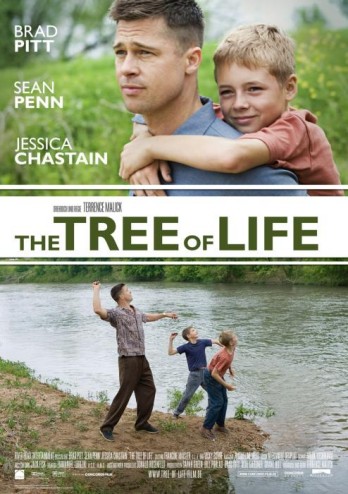 While I usually begin my reviews with a “summary judgement”, I’m taking a different tack with The Tree of Life. Today I’m going to offer a disclaimer.

Warning: I could only watch forty-five minutes of this self-important movie before walking away. I doubt that I will ever return to see how it ended.

I know that in dismissing this movie I’m going against the critical grain. Despite gathering mixed press, there are many critics who found The Tree of Life to be a masterpiece of modern cinema. Even though it collected a mix of cat calls and cheers during its inaugural screening at Cannes, the movie still ended up winning the coveted Palme d’Or. The inevitable question then becomes, why should anybody listen to my humble musings in the face of so many well established voices lending their support to this film?

To answer that question I’m going to invoke wisdom beyond my years. It is an age old expression that my late Scottish sensei once said to me: bullshit baffles brains.

Strip away the camera work, visual metaphors, and mad divergences that would have made Kubrick blush, the premise of this movie seems rather straight forward. That is to say that late 20th century dads in America were jerks. Well how bloody original. There’s not a movie made in the last fifty years that has ever dealt with that obscure subject. Call me simple minded, but it seems to me that Fight Club’s line ”We’re a generation of men raised by women” shines a brighter light on sociological trends in America with a hell of a lot less effort. So is The Tree of Life visual poetry, or is it just bloated in extremis to make up for its unoriginal premise?

In addition to being over wrought, I also charge this movie with being self-important. There is a very thin and porous barrier between art and indulgent pretension. In my estimation, one of the best markers of something’s artistic quality is the extent to which the artist presents their work without calling attention to it as art per se. The moment a film, or any other piece of media, starts touting itself as art is the moment I lose interest and dismiss the entirety of what’s going on as an act of ego on behalf of the creator. Once Terrence Malick took his movie out of Anytown, USA and opted for a fifteen minute tour of the cosmos that saw the formation of the solar system, the birth of the first protein on primordial Earth, and the subsequent extinction of the dinosaurs, the story and indeed the whole production adopted an air of painful arrogant pretension. Is the audience really to believe that this very typical story of suburban tragedy/tedium is on par with the magnificent cosmology of the solar system? Is it somehow necessary to show the origin of the species to understand the emotions of the ensemble? Humanity is not that timeless; nor is Brad Pitt’s character interesting enough to deserve such a heavy handed connection.

Such a straight forward equation as humanity < universe has done nothing to head off a legion of comparisons to 2001: A Space Odyssey. These paltry attempts to legitimize The Tree of Life are ill-founded. Kubrick and Clarke charted the course of humanity as a means of showing our ultimate smallness in the face of the monoliths, the wonders of the universe, and Dave’s evolution into the Star Child. I saw little comparable to that in The Tree of Life. A child choosing between two parents and their respective philosophy of nature or grace, interspersed with scenes of Sean Penn’s midlife crisis, seems mundane and pointless when set against the cosmos. So please, spare me any such attempts to contextualize Malick as a modern day Kubrick.

With those ideas in play, I did not need to waste any more of my time seeing how The Tree of Life ended. The narrative’s facile conceits are obvious within first movements. Yes, it’s pretty. Yes, it’s experimental. Yes, it’s different from the usual flotsam and jetsam of Hollywood’s industrial movie mill. But those three things do nothing to move it beyond the first principle of my late mentor: bullshit baffles brains. This movie is only “good” so long as it confuses its audience to the point where they dare not speak out against it for fear of looking foolish.