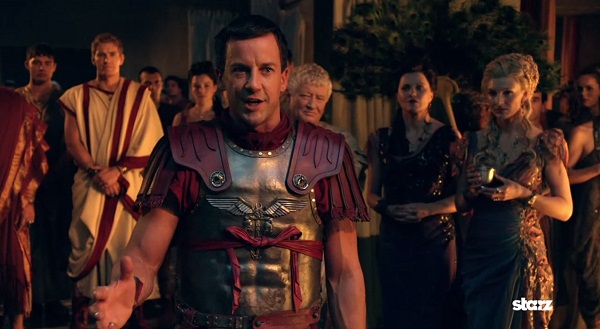 Capua gives way to Dallas as the Romans pile intrigues upon intrigues in an episode that almost downplays Spartacus’ storyline.

Don’t get me wrong, it’s a great episode if you have a taste for Roman intrigue. But as I sat down to write this recap it occurred to me that even established fans of the show might have a hard time keeping track of all the developments that occurred under the roof of the former house of Batiatus. To that end I offer this handy flowchart as a study aid for any who found themselves scratching their heads at the conclusion of Episode 4: Empty Hands. 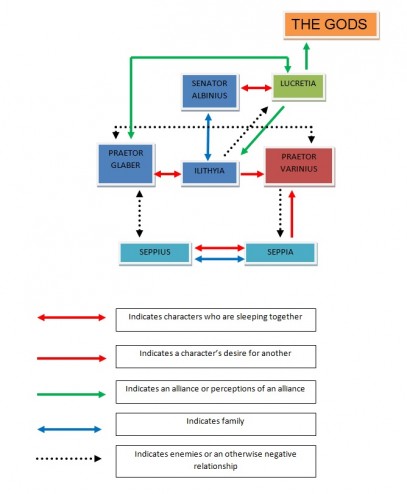 Spartacus’ story line is simpler than the Romans so let’s talk about that first. Spartacus, Nassir, Mira, three redshirt gladiators and the newly liberated Naevia are on the run from the mines. A number of Legionary patrols, one of which includes Ashur, are hot on their heels. In a series of gory battles, and I must say that the blood and swordplay are first rate in this episode, the fugitive ensemble gets whittled down to Spartacus, Mira, the wounded Nassir and Naevia. Requisite talk about abandoning the wounded gives Spartacus another chance to flex his noble leader muscles.

In any other character I would be bored of that by now. With Spartacus it seems fitting, perhaps more so as the audience transitions from Whitfield to McIntyre. Where Blood and Sand saw Spartacus going from Thracian to Roman, this season sees him going from Roman to General. So while some might call the constant spotlight on Spartacus’ virtues a tiresome gimmick, I think they are essential materials to his transformation.

That said, Spartacus’ story wraps with he and Mira prepared to make a last stand against the oncoming Roman patrols. But wait, it’s not actually Romans but Agron and the rest of the army come to rescue them. The only other thing that bears mentioning about this part of the plot is that it again demonstrates how this series doesn’t quite have enough production budget to meet the various writers’ and directors’ designs. The ubiquitous grey-blue blur in the background of the woods makes the environment seem less like a location shot and more like a very well designed sound stage. They’re making a good effort with what they’ve got, but the struggle between competing elements of the production is rather evident.

Now let’s turn our attention to some Roman intrigue. Glaber is dealing with the political fallout of pulling his troops out of Praetor Varinius’ celebratory games. Much to Glaber’s disappointment, the gambit is not paying off. Where he expected to find Spartacus a captive of his men, he found Crixus instead. And while Galber still has faith in Lucretia as the voice of divine prophecy, Ilithyia has had enough of both of them.

Without a doubt the scenes between Viva Bianca and Lucy Lawless are the best points in this episode. In the course of fifty-five minutes Ilithyia goes from mocking Lucretia’s prophecies as words as barren as her womb, to outright making an attempt on her life. Of course, it didn’t help her disposition when she walked in on Lucretia having a roll in the hay with her father, Senator Albinius. More on that in a moment.

Knowing that Glaber will likely never rise above his current office, Ilithyia turns her attentions toward the unwed Praetor Varinius. She suggests a party in his honour at the former Batiatus villa, much to the ire of her husband. Ilithyia soothes Glaber’s anger by reminding him that being seen to work with his co-Praetor will undermine Seppius and reassure the people of Capua that he has the situation well in hand. Thus does Seppius’ sister return as a player within the story. Upon the advice of Lucretia, Seppia turns her attention to Varinius. Yet her inability to make sport of one of the captured fugitives moves his eye to other women. Shortly thereafter Ilithyia catches Varinius alone and makes her intentions known: she will get Albinius to dissolve her marriage with Glaber so they can be wed and thus will come all of the Senator’s wealth and influence when Varinius makes his inevitable bid for Consul. How Ilithyia plans to deal with her pregnancy is not explicitly stated, but considering the downright evil nature of her character I suspect it might involve a tumble down some stairs or the Roman equivalent of a coat hanger abortion.

Content that she has the situation well in hand, Ilithyia goes to find her father. And that’s when we come to the daddy shagging. On the one hand it’s a smart play from Lucretia. Since women can’t hold property under Roman law and her father disowned her for marrying Quintus Batiatus, Lucretia’s long term future is by no means stable. As was said in a previous episode, within the walls of Roman society sex is sometimes the only card a woman can play. Naturally Ilithyia sees this as a power play on Lucretia’s part since a marriage between Albinius and Lucretia would make the latter Ilithyia’s step mother. So Ilithyia does what she does best: slaps Lucretia across the face and threatens to bash her head into the marble floor. The only thing that keeps Lucretia alive is a last minute confession that she only took Albinius to bed to help secure Ilithyia’s divorce from Glaber. This gives Ilithyia pause for consideration. For the first time in the new series she actually thinks that Lucretia might be on her side.

For my money this stinks of Lucretia playing a long con against Ilithyia. The writing combined with Lawless’ acting has been just ambiguous enough to leave a plausible grain of doubt in my mind toward Lucretia’s intentions. Truthfully I’d be disappointed if the season didn’t end with her thrusting a knife into Ilithyia’s back – or possibly her stomach in a moment of “you took my baby, albeit indirectly, and now I take yours.”

What’s to come for next week?

Likely plans to try and rescue the captive Crixus that will once again see Spartacus and Agron butt heads. Perhaps we might see a death match between Crixus and Oenomaus cut short with a Deus ex Spartacus.