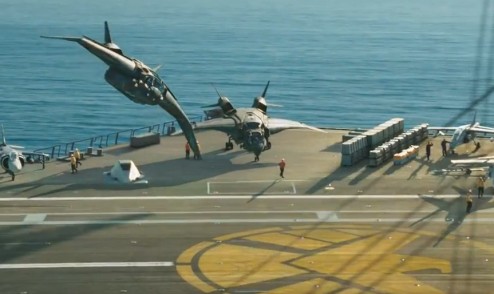 I have to assume that unless you have been living in a cave on Mars, with your fingers in your ears, humming the theme to Happy Days, you’ve seen the new trailer for The Avengers, which debuted during the Super Bowl – I’m told this bowl is an annual sporting event/pagan sacrifice of chickens’ wings. If Twitter is to be believed, however, the world has already moved on from its mightiest superheroes, shifting its attention to New York’s resident web slinger. Arguably, the Spider-Man trailer looks pretty good, but I see no reason why we shouldn’t revisit the most recent Avengers trailer to take a quick look at what’s going on.

Instead of doing a complete start to finish breakdown, I’m going to go back to the five points for Avengers success that I wrote last month to see how this trailer measures up therein.

Keep it on Earth – Check. But I’d be blind not to notice the flying laser spewing motorcycles of doom as well as the hovering thing that looks like Nero’s space drill from Star Trek 2009. I also noticed Nick Fury talking about how Earth is totally out gunned. You know who out guns everybody? The Kree. I know, probably not, likely Frost Giants as they’ve already tested well(?) with audiences. Still, Loki leading a Kree invasion of Earth? I would watch the hell out of that movie – assuming Whedon doesn’t follow the Marvel tradition of making the aliens so stupid as to be laughable.

Do something epic with Hulk – The Hulk as the Avengers secret weapon? That could be quite good. It would introduce a bit of moral ambiguity into the shiny white knight Avengers if Nick Fury used the language of “state before individual” to turn Banner into a living weapon.

Give us some tension between Tony Stark and Steve Rogers – They might not have been brawling on the deck of a helicarrier, but the rigid formality between Cap and Iron Man foreshadows nothing if not a tense relationship between the two. The trailer also hints at the more cordial relationship between Thor and Cap, a detail that Whedon had talked about during recent press events. 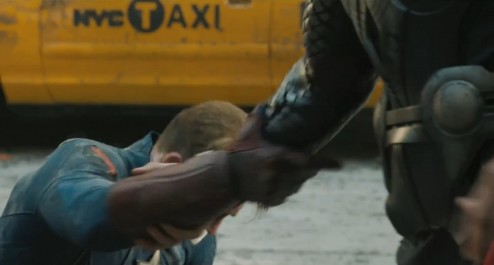 Don’t forget about Black Widow and Hawkeye – If people didn’t know why they should care about Black Widow and Hawkeye before this trailer, they still don’t. Widow’s screen time is limited to kicking something, a “come hither” look, and loading a pea shooter pistol. Similarly, Hawkeye draws his bow twice. In the immortal words of Edna Krabappel, “Pretty lame, Milhouse Marvel.” I get that Scarlet Witch is Magneto’s daughter and Fox owns the rights to that part of the Marvel Universe, but why in Odin’s name couldn’t we have The Wasp in play instead of a ret con’d Black Widow?

Four out of five for the new Avengers trailer is better than I expected. As always, how it will all come together remains to be seen. For now, I’ll at least upgrade this movie to “promising” from “potential boondoggle”.