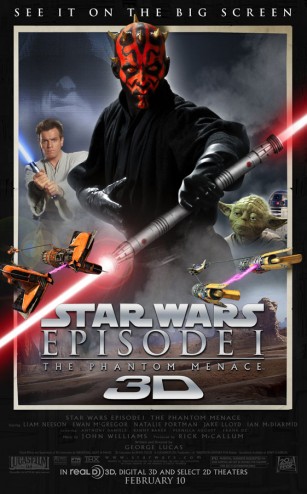 I think it’s a fair question. Why should anybody get excited about the re-release of a thirteen year old movie that by all honest measures is a mediocre production?

In case you haven’t been near a television for the last month, the whole thing is now in migraine inducing “Spectacular 3D”. That added dimension will likely see a legion of updates to the dated computer graphics. So there’s some potential for the movie to at least look a little better – unlike Episode Two which would need to be reshot with actual sets and props before I’d admit to it being a visually pleasing film. But let’s return to the question at hand.

Why would anybody want to revisit a movie that scored 56% on Rotten Tomatoes? At this point it’s almost impossible to make any criticism of the film, or the new trilogy, without drawing in some way upon Mr. Plinkett’s brilliant evisceration. However, I’ll do my best to be original.

1 – This movie is primarily about an eight year old.

With rare exception, child actors in dramatic roles are terrible. Adult actors draw upon personal experiences to give their characters a sense of emotional legitimacy. By and large child actors lack that wellspring of experience. In the case of The Phantom Menace, whatever acting skills young Jake Lloyd possessed are totally overshadowed by the likes of Liam Neeson and Ewan McGregor.

George Lucas has made multiple statements about how The Phantom Menace is first and foremost a children’s movie. Fair enough, even if making a “children’s movie” is a demarcation from Star Wars’ planet exploding, tantaun disembowelling, and force lightening torturing origins. This begs the question, how many children are going to get worked up about a senator’s evil for the sake of evil intrigues, intergalactic taxation disputes, and an immaculately conceived boy who would be Vader’s heavily Oedipal affections for an older woman. I can only imagine the snark that would come off a group of pre-teens raised on smart phones and reality television if The Phantom Menace was their first introduction to Star Wars.

3 – It kills the two most interesting characters for no reason.

I like to see a movie killing its characters as much as the next guy. Character deaths serve to progressively up the ante and suggest that maybe, just maybe, everybody won’t make it to the credits. Joss Whedon did this in Serenity to much praise. Now I know what people are saying, Lucas “killed” Obi-Wan in A New Hope. True, but he also left the audience with well defined characters in the likes of Han, Luke, and Leia. Killing Qui-Gon is a pointless thing that serves only to weaken the collective acting chops of the surviving cast: a boy who misses his mommy, a neophyte Jedi who spends most of the movie as window dressing, and the servant to a queen who (what a twist) is actually the queen. If I didn’t know what was to come, I would have no idea why I should care about this character triad.

Then there’s the dark side of the force. Darth Maul is a fantastic antagonist. There’s no moral ambiguity or doubt about his intentions; he’s a Sith, and just like Darth Vader in Episode Four that’s all you need to know. The fact that he gets replaced by Christopher Lee and then an asthmatic cyborg is a travesty. Imagine Vader dying at the end of A New Hope only to be replaced by Admiral Piett in Empire. It is the height of anti-climatic writing.

I could go on at length, but at this point, you, gentle reader, either find yourself wondering why anybody would watch this movie or preparing a scathing rebuttal against my perceived heresy. In either case, no more words need be spent on my part. Save to say that George Lucas won’t be collecting any more box office returns from me.