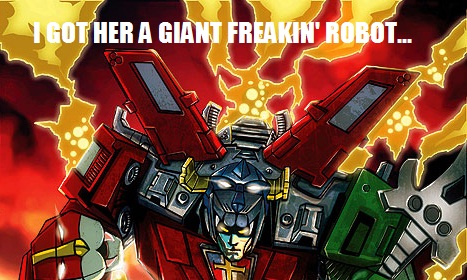 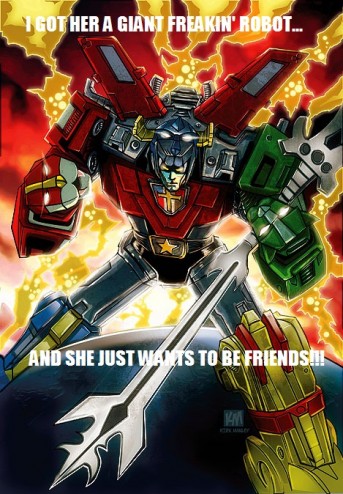 Ah, Valentine’s Day. It’s the one day of the year that we stop to ponder on the acts of the martyred Saint Valentinus whose deeds, birthday, and reason for being killed remain debated and largely unrecognized within the church. It’s also the day that a certain subset of romantically coupled people make everybody else on the planet, single or paired, feel absolutely inadequate.

To combat this most artificial non-holiday, I have assembled my Voltron of Anti-Love Day sentiment. I do this not to ridicule the institutionalization of the human mating drive. But to bring us all together in the common purpose of laughter on a day that sees so many people asking, “Why did Jenkins from marketing have to spring for the string quartet? Now I look bad.”

Behold, five robot lions internet videos that if nothing else will make you feel just the slightest bit more cheerful.

Nothing says love like a deranged Spanish professor blackmailing two of his students into acts of homoeroticism.

Next time you don’t want to say it, don’t. Also a great source of calcium, because who wants to deal with osteoporosis and a broken heart.

Form the NSFW arms and body!

So much of Valentine’s day is about setting the mood for an inevitable romantic encounter. An encounter, that for some reason, a certain somebody expects to be just a little better than any other encounter. But it’s just so much pressure. And I’ve got this new boss at work who is yelling at me all the time. Stop looking at me that way, it happens to everybody…anyway here’s a song to set the mood.

And I’ll form the head! Hey, is it just me or does that part of Keith’s “form Voltron” speech sound a little…dirty?

Just in time for love day, the siblings Hewlett have released the second episode of their web series Assassidate. This one offers impressionist art, cyber terrorism, and witty wordplay. I’d say it’s almost certain to put a genuine smile on your face. Not like all those fake smiles that you’ve been using all day as you pretend to be excited about other people’s PDAs. In fact, the only way this episode wouldn’t work for you is if you’re newly divorced, spending Valentine’s Day with your mother, and your little sister has more game then you do. If that’s the case, you might want to call it a day with the Gentleman’s Rant.

Enjoy your love day. Rebecca and I will be doing what we always do on February 14th, eating pizza and drinking beer in our living room. We might also watch some Breaking Bad. Watching Bryan Cranston cook meth in his underwear is surprisingly romantic.